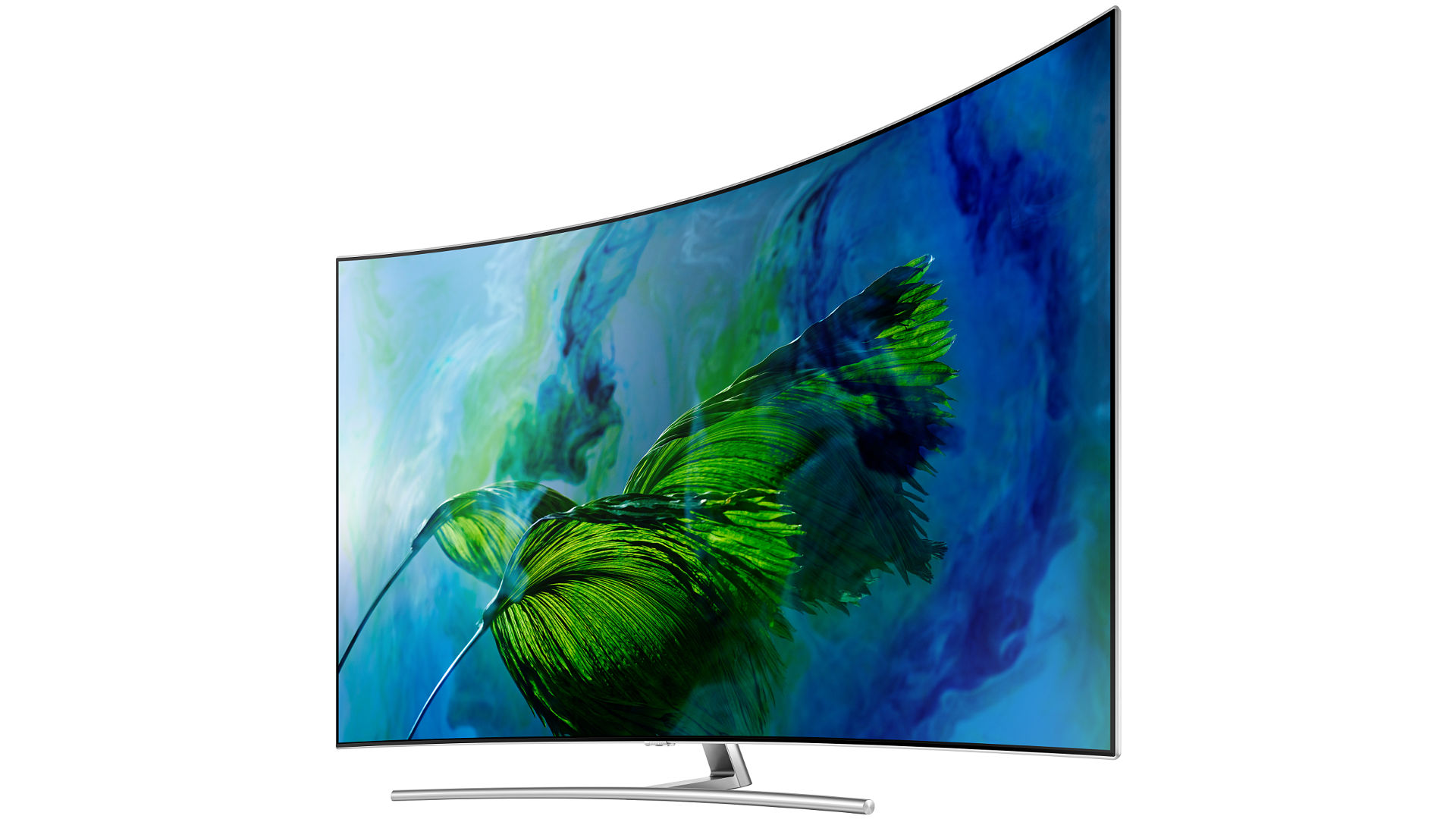 Samsung’s new Q8C QLED LED TV is the essential TV to have for all of your TV watching needs. When you talk about a TV that does everything and does it well… This is that TV. Samsung gave me the unique opportunity of reviewing their Q8C QLED. It’s a TV that despite its cost makes it seem so worth it.

Samsung’s Q8C is part of their higher end branded TV’s. This is a TV that takes advantage of great design and it also comes packed with all of the latest technology pertaining to TV’s and content such as 4K, HDR, QLED Technology and that curved screen. It all adds up to the best TV watching and gaming experiences I’ve ever had.

I’ll start from the beginning. I won’t pretend to know a great deal about TV technology. I do know what I want when I buy a TV. I want a big screen, great picture, rich blacks, wide color gamut, bright picture, watch sports, blu-rays in stunning quality and lastly, the ability to game but without too much input lag. The Q8 was able to do all of the above for me quite handily. 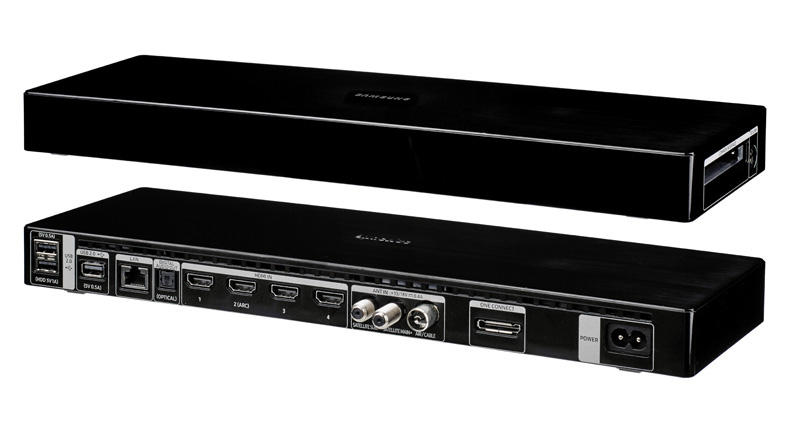 The Q8 I have is the 65′ curved. It’s big, bold and beautiful. The Q8 is all brushed aluminum. It comes with a matching brushed aluminum voice responsive remote control and an external connections box which can sit pretty much anywhere depending on how you intend to seat this TV. Whether you wall mount the Q8 or put it on a stand. It offers 4 HDMI ports, 2 USB ports, optical audio port, Ethernet and a DisplayPort input. This is probably going to be the future of connections and it works so well here. 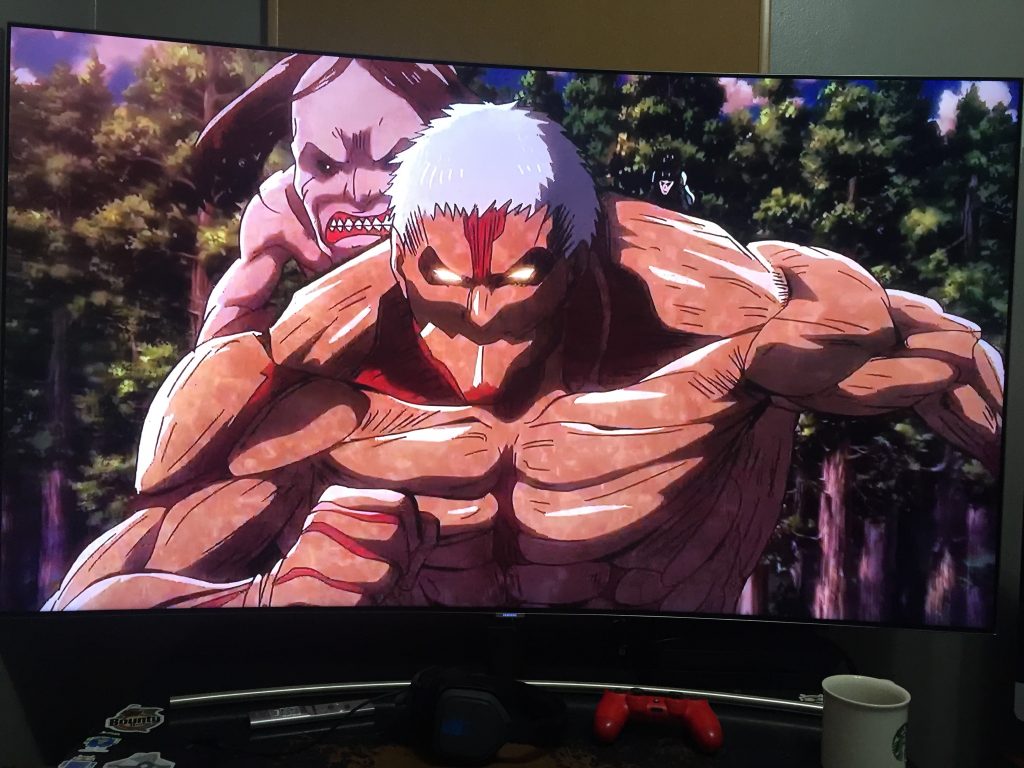 Picture quality is the reason that a person would buy a TV like this in the first place. Yeah, the size matters a little bit but what you see on that screen is what counts. The Q8 is an HDR, Quantum Dot LED. What does all that mean? I’ll explain it as best I can in the simplest way based on my understanding because it’s not a simple science. Let’s start with Quantum Dot. Quantum dot is basically an LED backlight technology that allows for better and more realistic color in what you’re watching all based on how light is passed thru the LED’s individually. In a nutshell, this means that there will be less software tricks involved in color enhancement and you’ll get deeper, richer blacks and a more natural looking environment when watching your favorite shows not to mention an incredibly bright screen. The Q8 has a brightness at just about 1500 nits which is blindingly bright so being in a room with a lot of natural light is not an issue for the Q8. That’s the crux of it but if your inner nerd wants to know more about it then WIRED magazine has a great piece on what it actually is and you can check it HERE.

HDR or High Dynamic Range compliments this TV being a QLED. HDR is the contrast ratio between the brightest whites and the darkest blacks. It’s all in an effort to give you a picture as close to what your eye sees or as close to real life as possible. This is not a lone technology. Dolby Vision is a similar technology also competing for viewers’ affection. It boasts similar properties but greater in some areas and not so much in other areas. Samsung opted for its own version of HDR called HDR 10+ which is optimized for their TV’s.

We now know that the Q8 is a TV fit for NASA and it offered me an experience like I’ve never had. For a techie and for the all of the products that I review, test and own, I’m not always excited about TV’s. The Q8 really gave me a different perspective on things. I understand now why the technology matters so much. The Q8 is expensive as f–k but I totally get why someone would spend this kind of money. When you turn the Q8 on, everything just seems to look so much better. I did go into the settings and do some tweaking to get the brightness and color levels where I wanted but if you’re not one to want to mess around with the settings then the preset options are more than fine. The Q8 has more than enough choice within the software that will help give you the experience you want without being over complicated.

I’m not a big TV watcher I must admit. With the Q8, I kinda became a junkie. Watching soccer on the weekends and Yankee games was like me being in a skybox suite watching it. Having the Q8 has also increased my Netflix, Amazon and Hulu consumption. Finally being able to watch my favorite streaming services in 4K and on this TV made me feel like I wasn’t wasting money on those services.

Gaming and everything else Q8 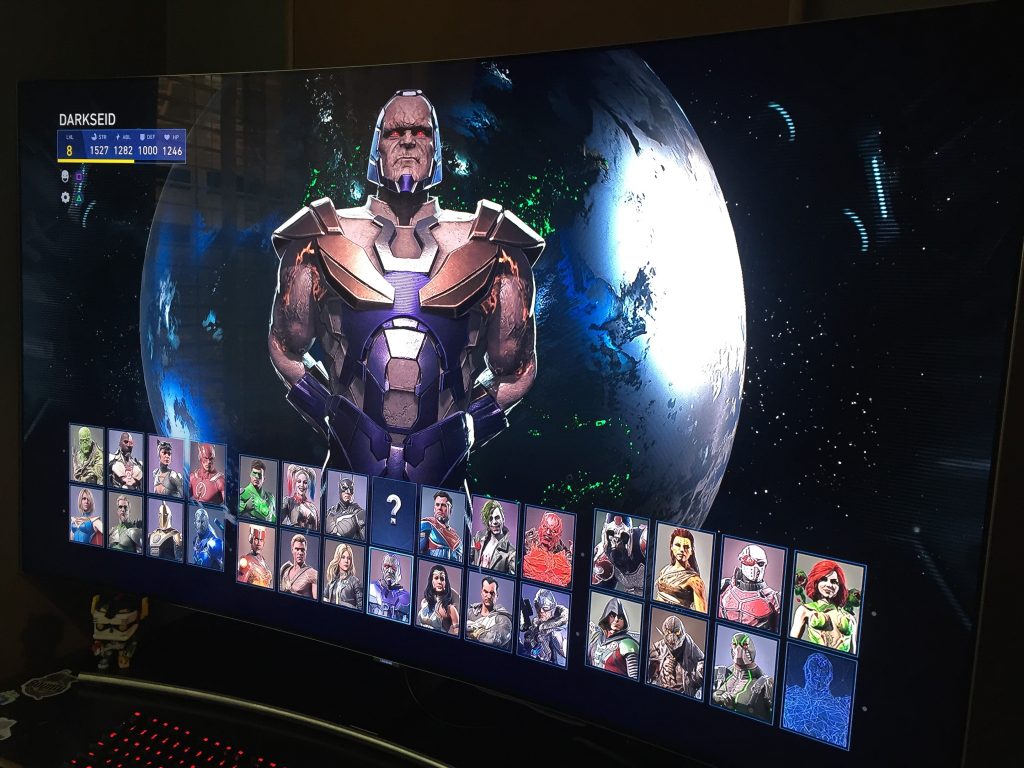 Gaming on the Q8 is the primary reason that I personally would buy a TV of this type or recommend it. I’m not saying it’s the best TV ever made in terms of gaming but for me as it stands right now. It’s the champ. Initially, when I started gaming on the Q8 I didn’t have a PS4 Pro. Gaming on the Q8 was pretty basic, looked slightly well and of course, the screen is huge. So right away I thought, not bad. Not great but not bad. Things did change however when I used my Xbox One S and I upgraded to the PS4 Pro. My gaming experience was a lot different. The upscaling with those two consoles made gaming so much better. Not for all games but a select few. Rise of the Tomb Raider was beautiful. 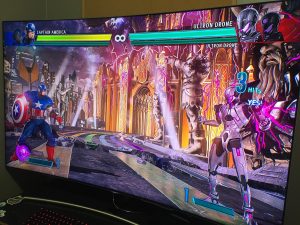 The trick to making the games beautiful was in changing the settings to support HDR on the PS4 Pro as well as the TV. The Xbox One S made the changes automatically and I was getting the best possible resolution out of my gaming. The Q8 also has a Game mode which helps with color, brightness and input lag when gaming. I played a variety of games and while the Q8 really couldn’t help all of the games in terms of upscaling, It drove me to get back into some of the older games that I liked just to see how it would look on this beautiful TV. God of War 3, Batman: Arkham Knight, Ghost Recon, GTA V all got recycled and the current crop of games that I play now were even more fun to play with the Q8. Forza Horizon and Destiny were in constant rotation. Coincidentally those were also the two games that had some instances of input lag from time to time but for the most part I didn’t really endure too much issue with those games.

The sound that you get from the Q8 is such that you would think that you have a soundbar built into it. It’s that good. My games sounded really good. I could hear all of my sounds and playing games like Destiny or CoD: Infinite Warfare gave me the feeling of being more involved.

Playing music on the Q8 was an experience too. I’m a hip hop head and playing hip hop music on your TV isn’t always a good idea. Hip Hop music, especially hip hop from the 90’s tends to be very bass heavy and I’ve blown quite a few TV speakers trying to listen to my favorite songs through my TV. Not a problem here. If the Q8 was a person it would say “That’s it?” “That’s all you got?” I cranked the Q8 up to ungodly levels and my sound was never distorted. In fact. It was too loud at times. I haven’t used my soundbar or my bluetooth speakers once since I got the Q8.

The Q8 is also a smart TV. It’s a Tizen powered TV with a simple launcher bar at the bottom that comes standard with everything one needs for streaming service consumption. Netflix, Amazon Video, Spotify, Hulu, Google Movies, YouTube, etc. It’s your hub for everything. It’s easy enough for anyone to use and it’s minimally intrusive. Just a push of a button on the remote control and the menu pops up at the bottom and you can make your choice and you’re good to go. I personally didn’t have any hiccups with the software other than two annoying updates that seemed to never end but other than that the Q8 functioned just fine as a smart TV. The Q8 also has Bluetooth 4.0 so you can connect a compatible keyboard to it that will make YouTube searches much easier than using the remote control.

Should I buy the Q8?

This is a hard question because I absolutely love the Q8C. It’s a hard TV not to love. It comes with all of the best technology in a minimalist yet beautiful design. It’s easily a TV that will last you at least 5 years without becoming an obsolete TV. There’s nothing not to like about the Q8 except for the price. The model I had retailed at $4500. That’s not small change, that’s not affordable. That’s used car money. It’s a hard to recommend the Q8 to anyone solely for that reason but I would recommend it for sure just from a TV point of view and even more so if you’re in that market. Everyone that I showed the Q8 to absolutely loved it but then the question of the price came up and it changed the topic immediately. This is the caveat to wanting a TV like this. With a price at nearly 5 grand only a small group of people can afford it. To be fair, Samsung is not the only company with an exorbitantly priced TV like this. OLED’s and QLED’s are at the top of the TV food chain. LG’s E7 series with similar specs is priced comparatively to the Q8 as well as the Sony A1E series. Truth be told, the Q8 is the cheapest of the three. High end TV’s are necessary because they’ll stand the test of time better than lesser expensive models because of all the technology involved. Apple has expensive computers that they update every six months after you spent 2 grand on your Mac so if we aren’t critical of that then I won’t be overly critical of this. I mean, realistically, you don’t have to buy the Q8C but if you can, you should. I’ve tested a lot of TV’s and the Q8 is the TV I had the most fun with by far and it is the best TV I’ve ever done anything on. It’s a bold statement, yes, but it’s true.