Since the original release of the Amazon Echo a couple of years back they have expanded the brand greatly. You have the now considered OG Echo, the more portable Tap and the extremely small Dot. She the Echo packs the most punch it is also the most expensive. A lot of times folks will opt for the Dot just on price alone. While the Dot does provide audio and can connect to a speaker via aux cable it still needs to be plugged. This where Vaux comes into play. 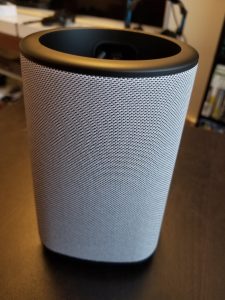 Vaux is a battery-powered speaker from a company Ninety7. Essentially it’s designed exclusively for Amazon’s Echo Dot. It’s about the standard height of a portable speaker and fits the Dot in perfectly. It is a 360 degree speaker and its outside has this fabric cloth like feel to it.

Taking it out the box I was surprised how nice it felt and it’s pretty light as well. Vaux does give your Echo Dot the makeover it didn’t realize it needed. 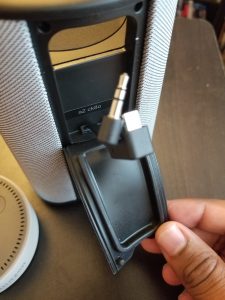 Getting the Vaux and Dot realistically is an easy plug and play. Setup probably takes you a minute at most. On the back of the Vaux is a silicon tab you pull back that exposes two wires. One to charge the Dot and the other for audio.

All you have to do is place the Dot inside the base of the Vaux, connect the wires and power it on. The Vaux doesn’t come with a power plug to charge but you can just use the charger that came with your Echo Dot. 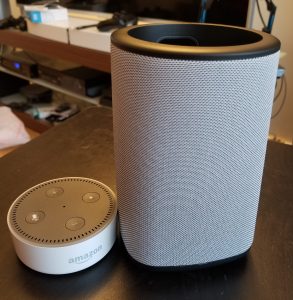 Giving the Vaux some play with the Dot I will say it surprisingly comes in handy. I don’t have to yell across the room or have Echos all over the place (not saying that’s a problem). I’m not a big fan of yelling so the convenience of moving Alexa from the bedroom to the kitchen and vice versa is welcome. As far as audio quality is considered for Alexa’s responses and say news radio, podcasts, etc. It sounds fine.

Now with playing music from say Amazon music or Spotify you aren’t going to get the best quality sound. But for the price you are paying it’s kind of expected and I wouldn’t let that deter you from the Vaux. I was still using to jam to tunes while I have other speakers at my disposal.

Battery life is estimated at six hours with the Vaux but I haven’t come near that yet. Maybe because I tend to turn it off sometimes. Leaving it on will of course kill the battery as it’s not connected to a static power supply all the time. For just under $50 you are able to get the Vaux and usually the Dot is sale for around $35-50 at times. You could go for the Amazon Tap which combines both but that is essentially $130 but will give you more battery life.

If you are interested the Vaux is going for $49.95 via their website or on Amazon. Also with this being Prime Day you can snag both the Vaux and Echo Dot for a cool $75.

Vaux for Amazon Echo Dot
1 of 7