This past Tuesday DJI held a gathering to unveil a drone. Surprise? No. Normally there wouldn’t be a surprise in that but this time around they had a little bit of a surprise when they unveiled the MAVIC PRO. A truly portable drone, for anyone. 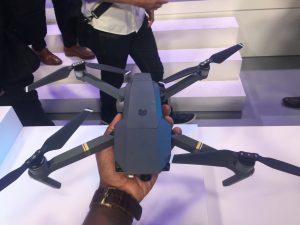 The MAVIC PRO is an amazing little drone. It folds up in all the right places and it has enough power and technology at an affordable price to make it anyone’s first drone if they were interested in buying one. DJI made sure the MAVIC PRO doesn’t feel like a “starter” drone by making sure it’s got the hardware that some of the more expensive drones like the Phantom 4 would typically have. Just on a smaller scale.

On a basic level the MAVIC pro gets up to about 40 mph, gives you 27 minutes of flight time, has a true 4K 30fps with 12M pixel still camera and the best part of what the MAVIC PRO does is in it’s gesture tracking. At the presentation DJI showed this off and it was really cool to see. Of course this not a new thing gesture tracking, The Phantom Pro 4 can do it but for some strange reason it looked so much cooler the way the MAVIC PRO does it not to mention the MAVIC PRO has similar if not the same sensors as the Phantom 4 so that’s just makes this that much better for the price.

A simple wave of the hand puts the MAVIC in gesture mode and after that you can have the MAVIC follow you, circle you in a 360 degree pattern and even go back and land from the spot it took off from. When you’re finished filming whatever landscape you were admiring you can just use another hand gesture that directs the MAVIC PRO to shoot the perfect selfie and you have your shot. 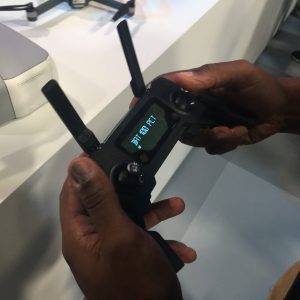 DJI does have a remote control that comes with the MAVIC PRO that sells for $249 which will bring your total for the drone to just about $1000. The remote control connects right to your iPhone and with that you’ll get better functionality and flight control so it is a necessity although you can try to freestyle without it. I wouldn’t.

Overall the MAVIC PRO is an offering from DJI to those who want a good drone that isn’t complicated as well as being easy to carry around. To carry around a drone is a task. DJI accomplished portability and ease of use with high end technology and if you don’t own a drone then this should probably be the first drone you ever buy. My guess is this will be the first drone that most people will buy, myself included. It’s an easy choice for $749 bucks (well, really $1000). Take a look at it for yourself HERE and I think you would be compelled to get one of these in the future.