When Street Fighter V initially released it got cheers and jeers from everyone based on certain decisions they made. One of those being no Arcade Mode. Sometimes you don’t want to go thru long story modes or play anyone online and just want to have a one on one against the computer. Capcom has finally added a “Versus CPU Mode” that allows you to duke it out with the CPU without any story mode or survival stipulations. Also last seen in Street Fighter III: 2nd Impact, Urien(Gill’s younger brother) has returned to the Street Fighter lineup.

Besides those two big additions Capcom has added “Daily Targets” which reward you for doing certain things, new interactive Stage KOs and more access to costumes via Season Pass DLC and some adjustments have been made to the game itself. You can check below to get a full detail of what’s in this late September update. 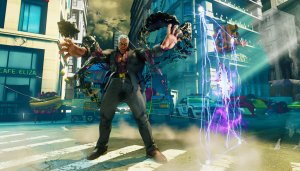 First introduced in  Street Fighter III: 2nd Impact, Urien returns to  Street Fighter V donning a pinstriped suit and a sinister smile. His unwavering confidence and tyrannical tendencies are tailor-made for menacing players who want their opponents to be outshined by Urien’s “Dominating Light.” In addition to his high-damage combos, he uses his slow-moving projectiles to pressure opponents and control the pace of the match. Urien can be purchased now for 100,000 Fight Money or $5.99 / €5.99 / £4.99 real currency.

Daily Targets
New Daily Targets are available starting today to help players earn extra Fight Money and purchase additional content on a regular basis. Each Daily Target has a time limit, so players will need to log-in to cash in on these. Rewards range between 100 and 5000 Fight Money.

Versus CPU mode
Versus CPU mode is added as another option to standard Versus mode. Now, players can sharpen their skills before challenging others online by slugging it out offline against the computer, with varying difficulty options.

New Environmental Stage KO’s
New environmental stage KO’s have been added for all stages that were available at launch, so players can look forward to finding new ways to expand the playing field and humiliate their opponents.

·         Fighter Profiles are updated and stat tracking will now go live, so players can further dissect their gameplay to find and eliminate bad habits or simply show off their skills to friends.
·         Colors 3-10 on default, and battle costumes for all confirmed DLC characters will now be included for all Season Pass holders.
·         Existing and future premium costumes will now include colors 3-10 when purchased. This will be retroactive for those that have already purchased the premium costumes.
·         Color bundles are available for purchase with Fight Money or via the Steam and PlayStation stores. Content and pricing is listed below:

Any other features or characters you wish Capcom would add to SFV?