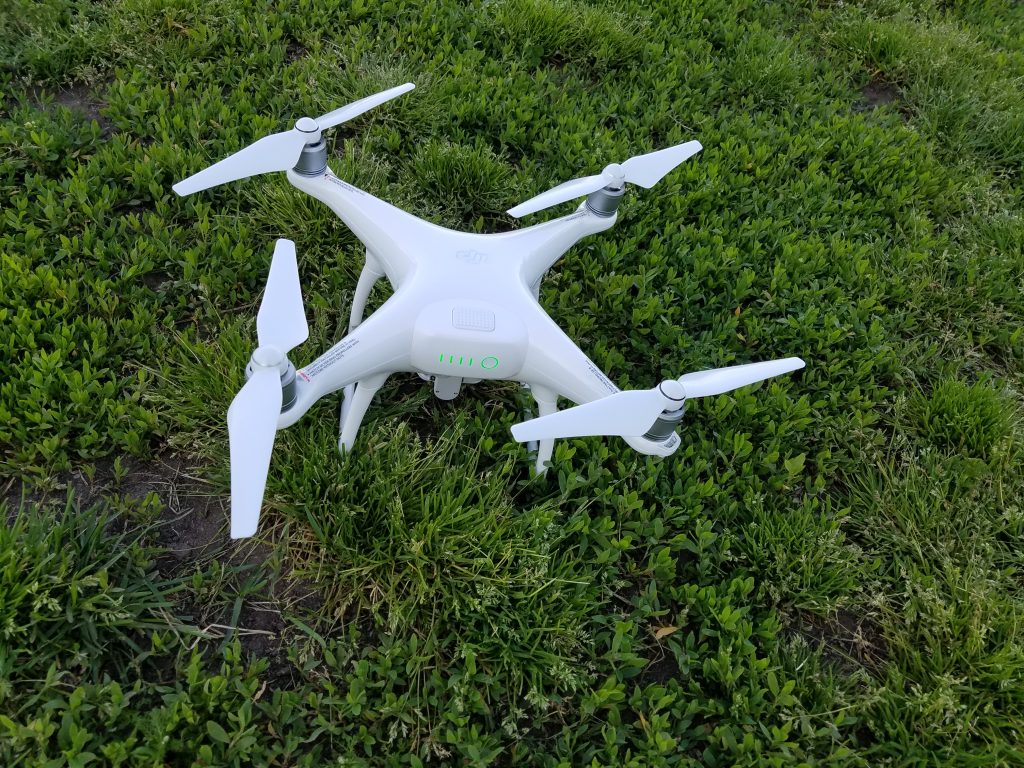 Drones have been all the rage over the past year and where DJI used to run the realm of flying the skies there has been some decent competitors out there trying to take their spot. A few months back DJI looked to remedy this with the introduction of the Phantom 4. Adding things such as obstacle detection, tracking and other features the Phantom 4 wants to be the only drone you will ever need. But does it really fit the description?

First off the Phantom 4 like its predecessor is a quadcopter. It comes in a nice sized styrofoam box(with handle) that houses the Phantom 4 body, two sets of propellers, remote control, battery, and charger cables. The ability to store all that in a single box and still make it easy to carry was a plus. 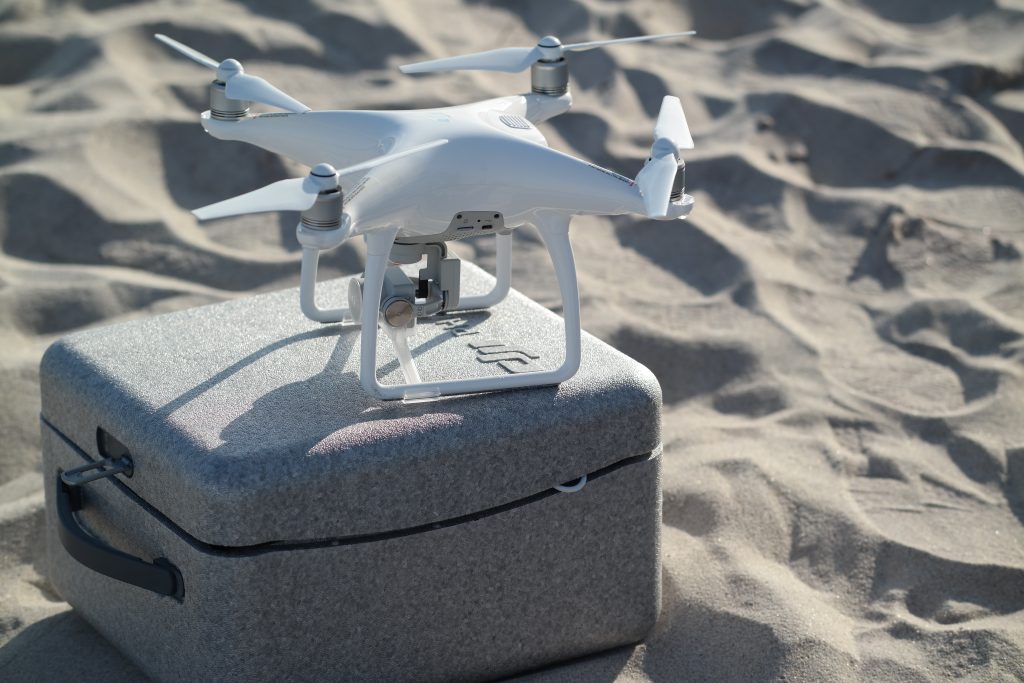 When I reviewed the Yuneec 4K last year its big was like a huge suitcase and garnered some attention I may not of wanted. The size of the intelligent battery for the Phantom 4 is 5350 mAh. You are estimated to get about 20-25mins on it depending on what your intent is with the P4. The remote control used for the P4 is more of a holster to use with your smartphone/tablet whether it Android or iOS running. I did find it rather comfortable and light to hold in the hand.

Getting the Phantom 4 off the ground was a slightly different learning curve then when I used the Yuneec 4K. I had to download all the software thru the phone with it synced to the controller. I didn’t realize this out the box and took a hell of awhile in an almost no coverage area. Also had some issues getting it going with iOS sometimes but fared better with Android. 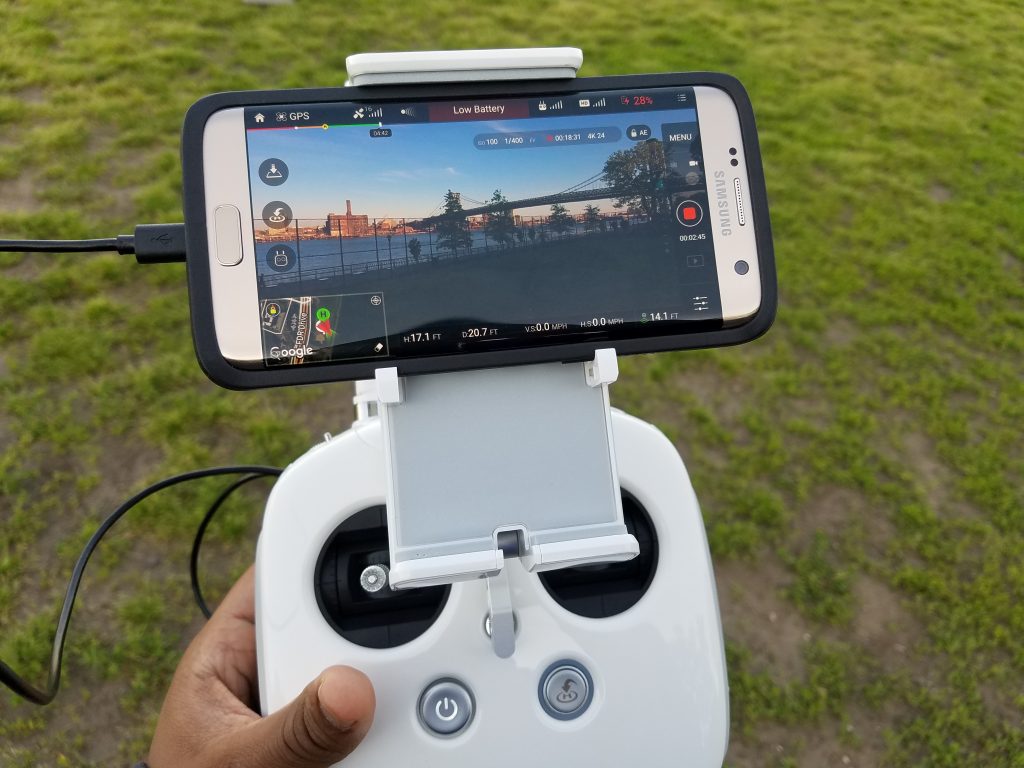 As I always state, since living in NYC its hard as hell to find an area where droning is allowed and there are no FAA restrictions. I even feel like areas I been to before have their airspace tied up now. In any event I did find a park on the Lower East Side of Manhattan where I was able to get some air and not be bothered what so ever while doing so. I was using an app called “Hover” on iOS that gave some good info. 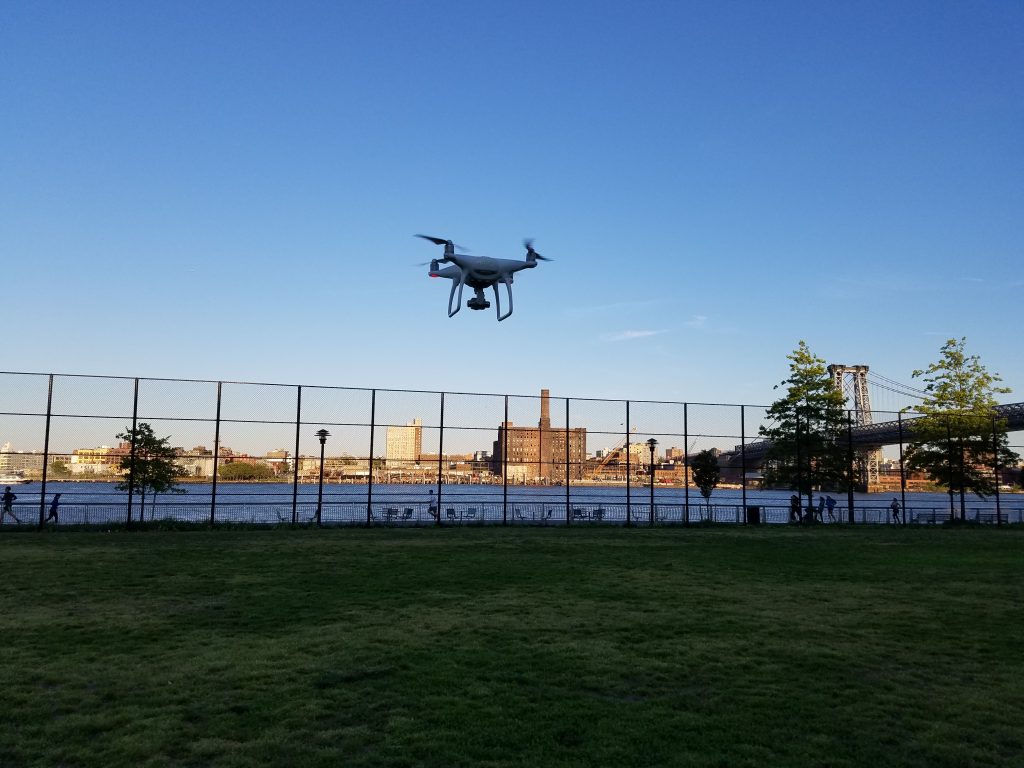 The Phantom 4 has a boatload of options to help you experience the best flying around. Options such as Visual Tracking were cool as it could follow me around and keep me in sight, and Tap to Fly is great even for novice flyers. I was able to easily tap a spot on the screen and off it would go. I didn’t use either option too much as I just wanted to have full control over the P4 and maneuver it how I wanted.

Battery life on the Phantom 4 actually wasn’t that bad. I was able to get all the content and play around with it as I wanted and that 25mins of time holds true. When the battery does run low it starts to descent which is always a plus in my book. Controlling the P4 was actually pretty simple and getting used to my phone being the display wasn’t as bad as I thought coming from using a controller with everything built-in. I love the weight of the P4 and carrying it around it in its case made it easier and more manageable for my daily train rides without taking up space or looking crazy.

Video recording came out gorgeous in 4K settings and I liked the multiple options for that and even picture taking. You can check the quality yourself below.

At a price of $1,399.99 you get what you pay for with DJI’s Phantom 4 drone. A very light designed model compared to others on the market. Easy to carry and very easy to control and user-friendly. Initial setup was a pain and advise you to do all this before taking the drone out to play. Also even though I managed on one battery I wish it came with another one. There are some bundles that include more and I feel if you are paying this much you should just go the extra mile and get a spare.