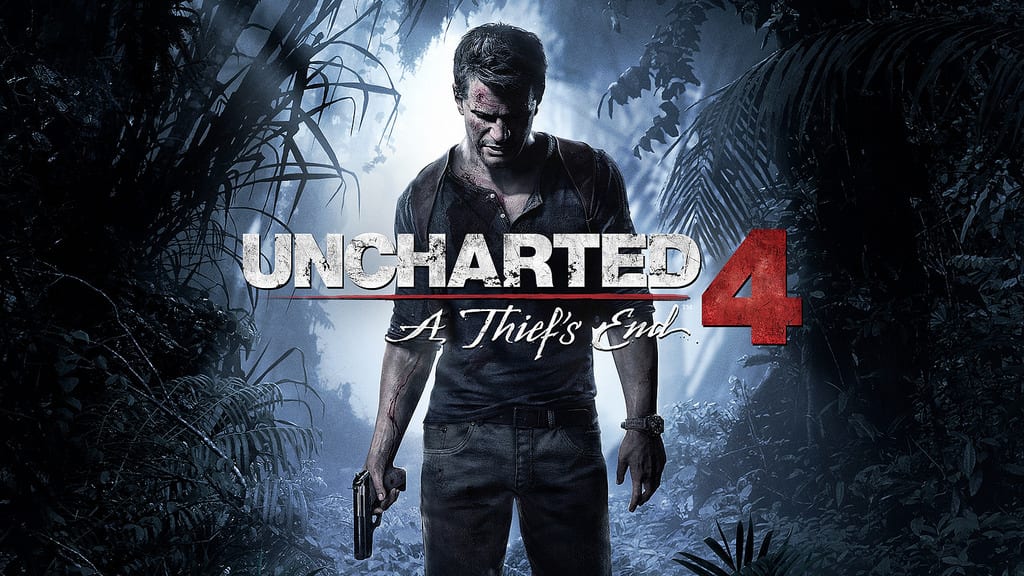 Uncharted has always been a game that gives you beautiful visuals and an enthralling story mixed with some great gameplay. It’s one of those series of games that has never been bad. Every installation of this popular game leads you to another part of the world on yet another treasure hunt. Nathan, Sully and the crew are back on the PS4 and better than before.

When Uncharted 4 was announced at E3 you could feel the excitement because you knew what to expect with this game and with it being in next-gen it made sense that the anticipation for this game was high. Finally, it’s here and it’s everything we expected it to be. Story rich, beautiful and fun. A great game to end a great series. 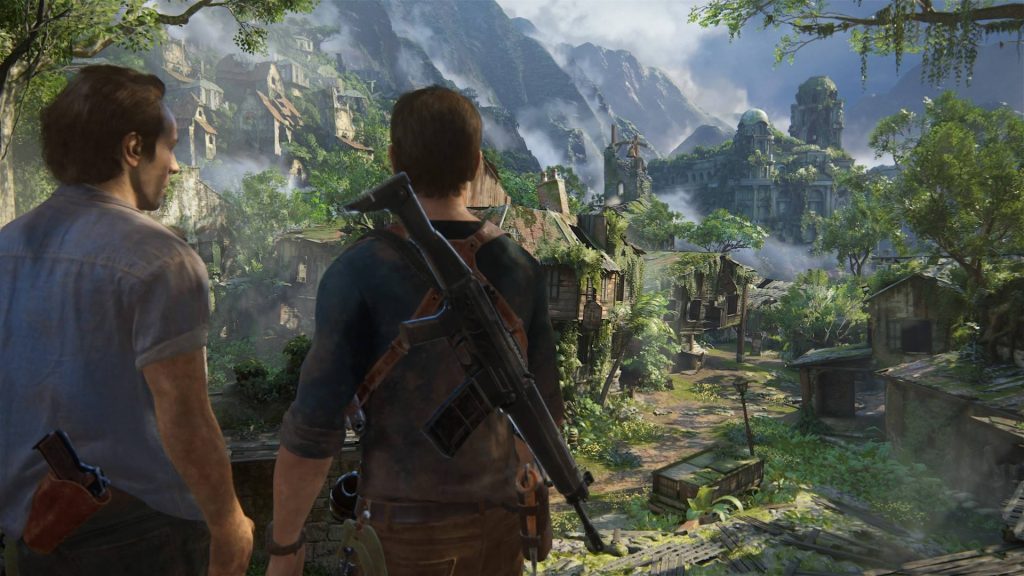 The story starts off in a prison and the events that will eventually lead to a prison break. It’s here that we meet Nate’s brother Sam and the story really begins. Without giving too much away, the prison break ends up being a botched effort and Sam ends up “dying”.

Enter Nate’s life 15 years after the prison break that ended up in Sam getting killed. The effect of that job changed Nate and as a result he gave up the life of a treasure hunter. Nathan Drake has finally retired for what seems like for good. He and his wife Elena are now living like “normal” people. It’s late into the evening when Nate’s goes out to his garage and finds a stranger in his garage. Under normal circumstances this would force Nate to react but this is no stranger. It’s Sam, the brother he had believed dead for 15 years. WTF? 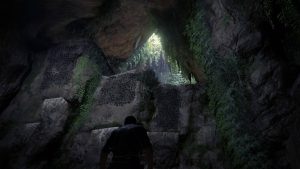 Sam begins to explain and give Nate a recap of that’s happened in the past 15 years as to why he didn’t let Nate know he was alive. It turns out Sam is in trouble with some very dangerous men and he’s been ordered to find a historical pirate treasure that’s been lost for over 300 years.

Here’s the backstory on that pirate treasure. Henry Avery is probably the most well-known pirate throughout history that established the now lost pirate city of Libertalia. Not only did he establish the lost city, Henry Avery was known to have amassed a treasure worth in excess of 400 million dollars. Knowing this, Nate and Sam must now embark on what’s probably going to be their most dangerous mission yet with a huge payoff. 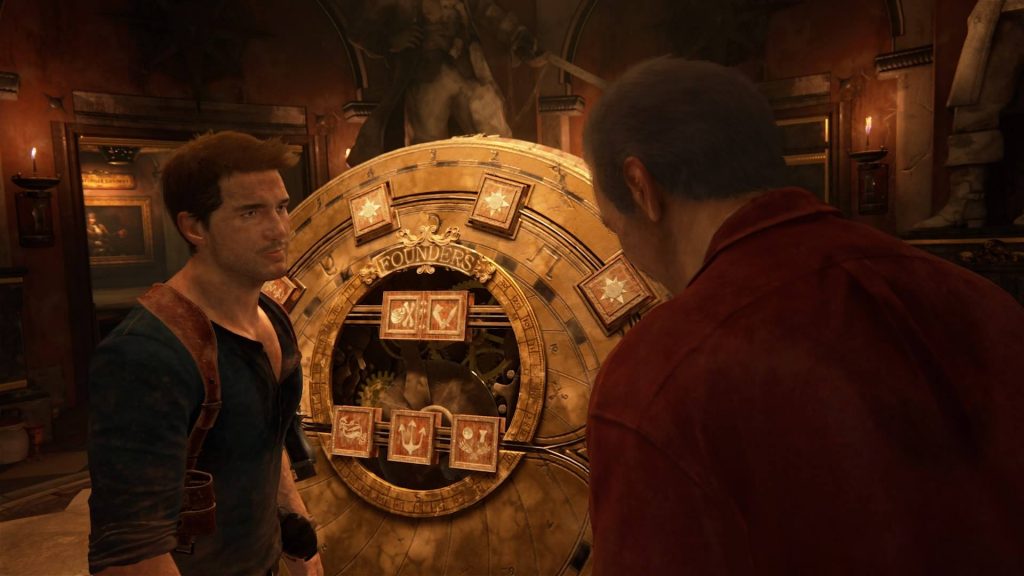 Of course this wouldn’t be an Uncharted game without antagonists to stir the pot. Uncharted has its villains as to be expected. The big bad in this game is Rafe Adler. Rafe Adler is a wealthy trust fund baby who is eager to prove to himself and the world that he is capable of making a name for himself without the benefit of having been born rich, for him this about ego. He teams up with Nadine Ross who owns a soon to be bankrupt security and mercenary firm called ShoreLine. She is in it solely for the financial benefit that would save her company and because she is so desperate she will stop at nothing to help Rafe get that treasure, and it also helps that she’s a total kickass trained killer. The two of them together create all sorts of problems for Nate and Sam as they are also in a race to find the buried riches that Henry Avery left behind 300 years or so after his death. That is the crux of the story. Uncharted 4 is a tale of treachery (as it always seems to be), ambition and blind obsession. That’s all there is to it. 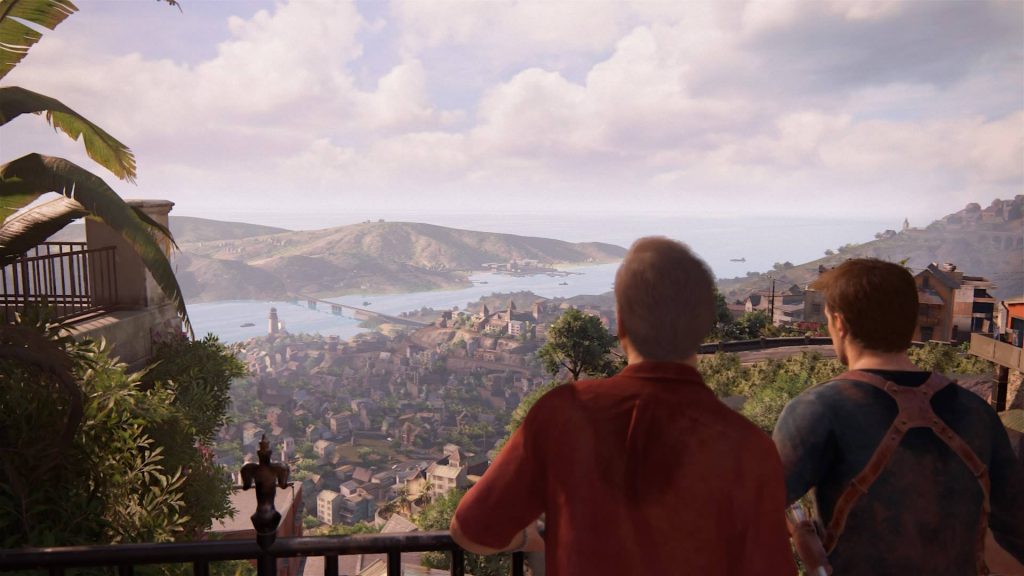 Uncharted 4 can only be described in one word. BEAUTIFUL. The game showcases some of the most stunning visuals, live game environments and landscapes that take full advantage of the PS4’s hardware capability. The attention paid to detail is unlike anything I’ve seen in a next-gen game up to this point and that’s not a bold claim I’m making. Only the Division can match it in terms of detail scale and even still I think it pales in comparison to what Uncharted 4 has to offer. From the cinematic cutscenes, to the characters, to the playable environments, you can’t help but feel as if you’re in a live action background when playing this game. 1080p and 4K TV’s are an absolute must if you play this game. So, if you still have a shitty TV you might wanna switch up before you embark on this game. You’ll be doing yourself a disservice any other way.

As far as the gameplay goes, Uncharted 4 gives you much of what you’ve been used to if you played any of the previous versions. If you’re a veteran of the series then there’s nothing new to learn here but there are a couple of tools that Nate uses more so than he has before and it’ll be some getting used to but you’ll do so almost immediately and unconsciously. Noobs playing this game will find that the learning curve is no different from playing any other new game, the more you play it the easier it gets. 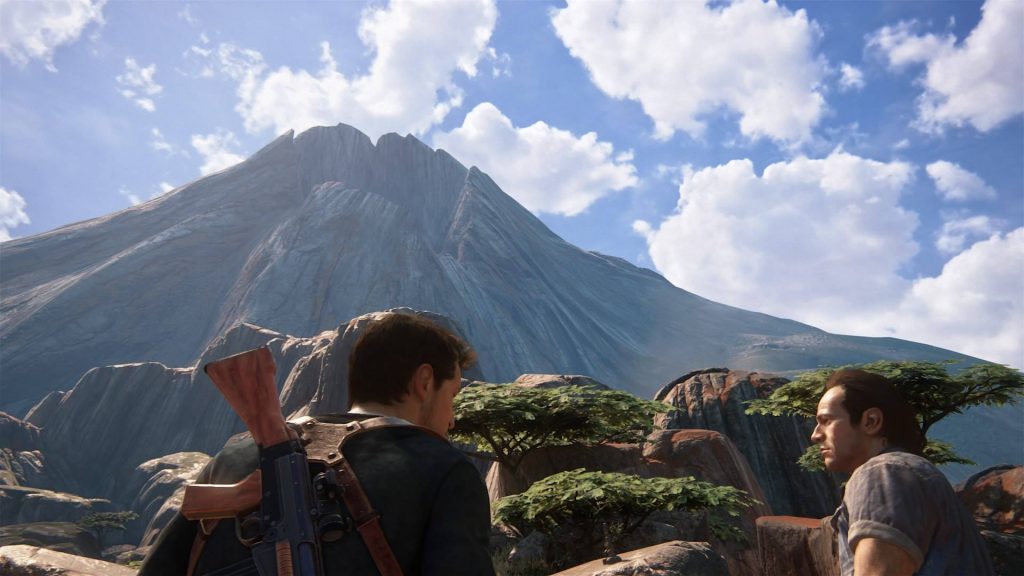 Nate’s equipment is vital to your success in this game. The grappling hook and rope especially are essential to your survival in this game, trust me, you’ll see. Your equipment is not just limited to what Nate can carry. Nate has more use of vehicles and interaction with the surrounding game environment to help with the journey. UC4’s vast locations are wide open to explore. Naughty Dog tried their best to not to make the game feel linear and for the most part it never really does even though sometimes your path is pre-determined no matter what actions you take but at no point does it stop or hinder the action.

Action is what makes Uncharted 4 really shine and when there is action to be had in the game, HOLY SHIT! there’s action. You’re going to find yourself in a lot of gun battles, car chases, cliffhanger moments literally and figuratively and if you’re successful the ending cutscene puts it all together. I love the way that the action plays out in this game when it does. There are so many ways to fight in this game. Nate can use guns, or he can use stealth and snap a neck, swords, whatever you can find you can use. Period. There’s no shortage of moments in this game where you don’t feel like you’re gonna die and have to start over. UC4 does a good job of keeping you on edge. You really just never know. One minute you’re walking on what appears to be solid ground and the next it gives way. Necessary tension is what makes this game work.

This game sounds perfect, is it? 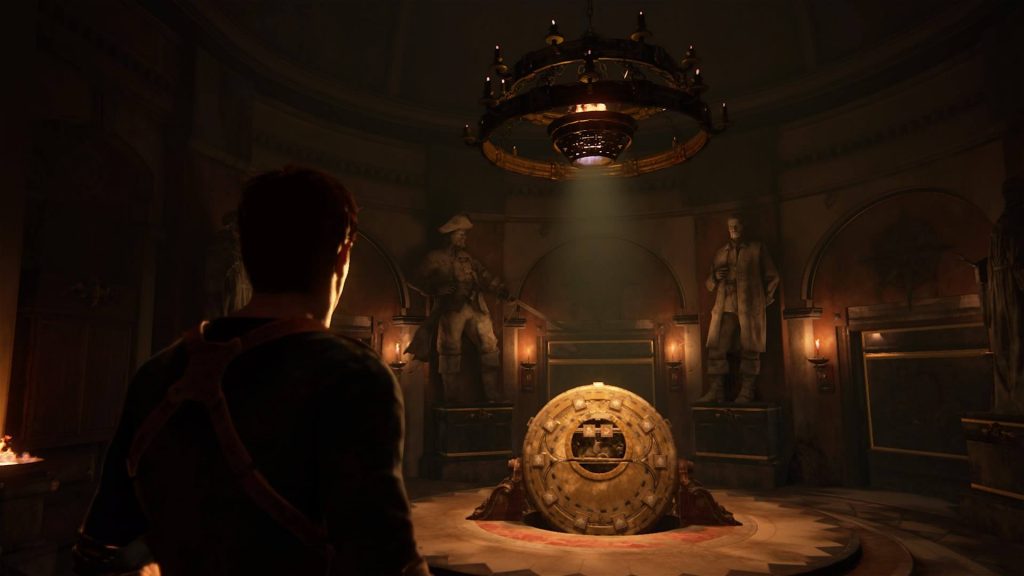 Uncharted 4 is by no means a perfect game if in fact there is such a thing. It’s not without its flaws and I hate to nitpick and be overly critical BUT there were just some things that I didn’t like with UC4. While Naughty Dog has always been able to keep us interested in the Uncharted series with its visuals, cut scenes and beautiful environments. It’s never really been able to give us more than a predictable story without the cookie cutter characters. Same rings true here, the characters are really boring and Sam has to go. In this game Nate’s brother Sam is a constant nuisance. After all, this whole “treasure hunt” is because of him and too many times he goes rogue or goes missing and now we have to go through the painfully exhausting and repetitive task of finding him and getting him out of trouble while damn near getting ourselves killed. I found this to be annoying. 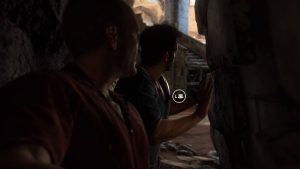 Secondly, Nate is supposed to be the best historian on the planet and I find that in a game where Shoreline and Rafe Adler are also looking for the same treasure but don’t have nearly the wealth of knowledge that Nate possesses but they always seemed to find everything before Nate and his crew. It didn’t make sense to me. Like really? How? And if they’re always somewhere far before we are then how do we end up always crossing paths?

Lastly and finally, UC4 can be very repetitive and can leave you wondering when are we going to move on to another part of the story. If I never see another mountain range again then my life is whole. I did so much rock climbing and grappling that at one point I could not wait for the game to end. Just when you thought you were moving on to see something different. NOPE. Same shit in a different place. I get the spelunking and rock climbing hiking aspect of the game but it doesn’t have to be the whole game. I’m actually quite sick of climbing. Indiana Jones didn’t do this much climbing so why do we? 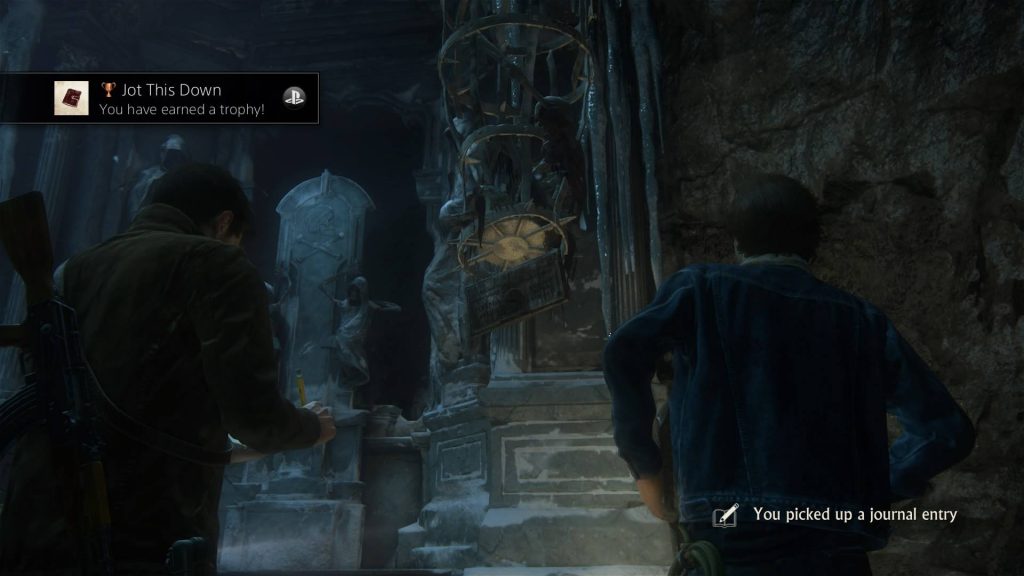 These are nitpicky and really stupid complaints and you may see it totally different and that’s fine, these were just my annoyances (I have no patience anymore). Overall though UC4 is an incredible game, the wait was well worth it and it’s a fitting way to end what has been a great set of games. It’s not often that you get 4 incredible games that are all noteworthy and stuck to its core format. This is what UC4 has always been good at and it never faltered or seemed to get stale even though you always knew how the story would play out. I don’t believe that this is the end of Uncharted however, you’ll understand why when you complete the game but for Nate it’s all over and on to the next chapter. Salute.

Oh, one more thing. I also recommend that if you get this game then you should also go out and get the Uncharted collection and play those too just for general principle just so you can say you beat them all. Why not?