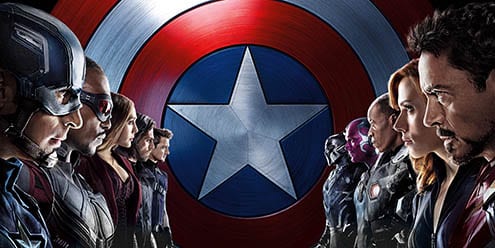 GEEK FACTS:
It may be hard to believe but Civil War is the thirteenth film in the Marvel Cinematic Universe.

The film is based on some of the concepts introduced by Mark Millar (Kick-Ass, Wanted, The Kingsmen) in Marvel’s 2006 cross-over mini-series Civil War.

On to the Spoiler-Free Review. 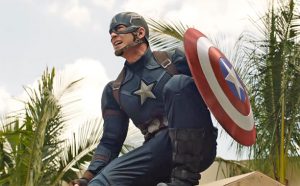 “Captain America: Civil War” leaves off after the events of “Avengers: Age of Ultron”. The country of Sokovia lay destroyed in the aftermath of the battle against Ultron. An ever-growing amount of people believe the Avengers need to be held accountable for their part in the mass destruction. The film opens a year later, Captain America leads a small team to Lagos, a small city in Nigeria to intercept a formidable terrorist. In attempting to neutralize an explosive, one of the team members deflects it towards a neighboring building; causing mass casualties and fatalities. The United Nations decide enough is enough, and create an agreement called the Sokovian Accords. Said agreement would mandate the Avengers and other “enhanced individuals” to register themselves, report to and be monitored by an international governing body. Any mission going forward would need to be authorized. 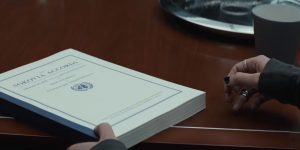 Tony Stark, still riddled with guilt for his part in the Ultron Events, agrees that in the long run the Accords benefit everyone. Steve Rogers having fought through a World War and many other battles first hand, believe that the Accords not only strip the heroes of basic rights but reporting to a governing body may create a conflict of interest and hinder their ability to help when needed. The situation is further complicated when there’s an attack at the signing of the Accords and Sergeant James Buchanan “Bucky” Barnes also known as “The Winter Soldier”, Steve’s closest friend turned HYDRA brainwashed assassin, is lead to be blamed.

Sibling Directors Joe and Anthony Russo directed “The Winter Soldier” return with Marvel feature veteran scribes Christopher Markus and Stephen McFeely to achieve something quite remarkable here. The film makes you question everything. You as the viewer feel involved, not only do you understand the choices they make and why, you get why it’s not an easy choice. The tension that builds is elevated by the performances of both Evans and Downey. They both play against each other so remarkably. Evans boasts his strongest performance as Cap here but its Downey showing most range of emotions as Tony Stark. As the conflict grows you find yourself going back and forth between choosing to root for Team Cap or Team Iron Man. Daniel Brühl’s performance as Zemo, was so very good but greatly overshadowed by everything else around him.

Everyone on both sides of the conflict and newcomers alike get a great deal of inclusion into the film. Each member of the team is there for a reason, whether it be in the form of adding something valuable to the story or comic relief. The action sequences are really well done, there are so many thrills and jaw dropping action sequences its difficult to go into detail without spoiling it. I will say this much, the film isn’t by all means perfect. I have my reservations about Stark’s secret inclusion into the conflict. Although it was expected, in comparison to the rest of the film; it’s the one scene that feels a bit shoehorned in. 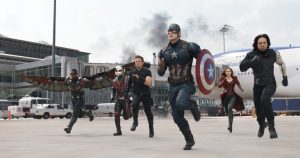 I can only wonder in amazement how the Russos will top this feat as they are directing the next two Avengers feature films. As it is now standard fare that a Marvel film will have one post credit scene, this one has two. For those wondering if Captain takes a dive at the end of the film, well you’ll have to watch, wait and see. The film certainly has the scope of an Avengers Film, but I still enjoyed “The Winter Soldier” more. As far as a well crafted spy thriller goes “Civil War” has elevated the game. By the end of the movie, will you still be on Team Cap or Team Iron Man?

Check out the Second Trailer here

Captain America: Civil War is out in 2D/3D/4DX NOW!