Yesterday, two of the biggest multiplayer games that are Destiny and The Division got some updates for their core players and hopefully some new players. There were some pretty significant changes to both games and if you’re fortunate enough to have both games then yesterday was a pretty busy day for you.

Let’s discuss updates. Updates are typically supposed to be a good thing (not to say that yesterday’s updates or updates are bad) but there are always going to be gamers who aren’t happy and some that love the changes. The key to updates is knowing exactly what is being updated and how it affects your gameplay within said games going forward. Since the updates for both games are quite extensive we’ll give you a general idea of what they mean for you.

If you’ve played Destiny from day one then you know it has gone through a series of updates starting with The Dark Below, House of Wolves and most recently The Taken King. You also know that these updates totaled $80 on top of the games’ original cost and many would say that Taken King aside the previous two “updates” were not worth the $20 each one of them cost. Well, I’m not sure if Bungie heard the community or even cares but this new update for the first time is completely free. That’s right FREE. 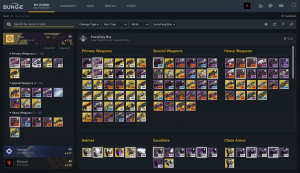 Although we get the new Destiny update for free. Don’t be overly excited by thinking that Bungie would completely overhaul Destiny and fix some of the annoyances that Destiny players deal with. Nope. Not happening with this update. This update is really just about giving its loyalists some new content to keep them occupied for a bit while they prepare some new things for the future…..hopefully.

The short version of the update is like this. Bungie has made some changes to the light levels by increasing them from 320 to 335. They recycled the Prison of Elders to include Taken and new Taken Bosses. With that you’ll see P.O.E enemies and bosses now have a 42 level of difficulty. You’ll have some new dancing emotes from Eververse (Taken Shiver is the best), some new armor that you can now customize with an illumination addition called “Chroma” so your armor now glows and year one weapons that you can now use once again for year two levels and yes the Shadow Price is one of those weapons YEAHHH!. 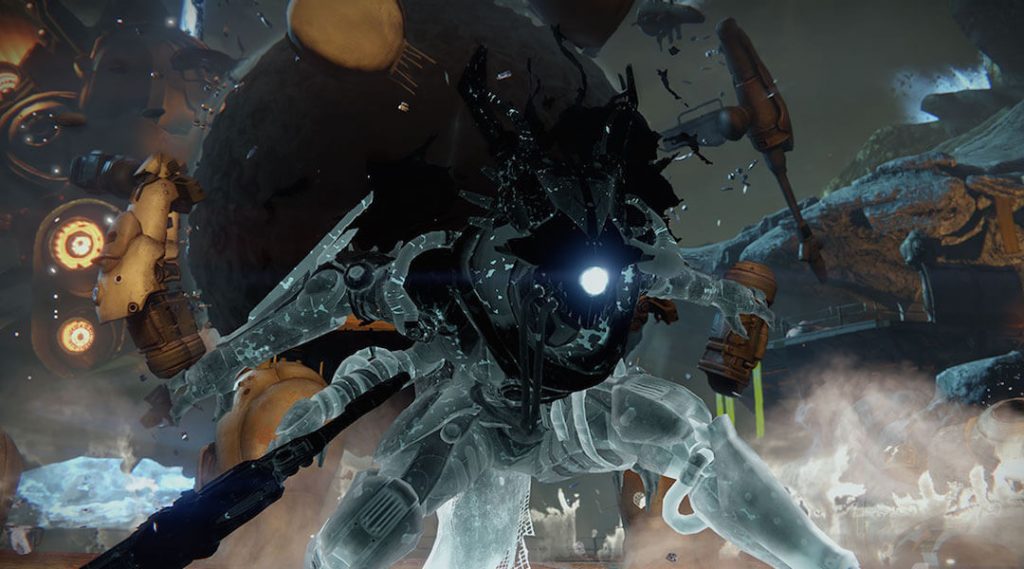 There’s also the “new” Blighted Chalice strike and Winter’s Run strike that you can do as well which are just recycled tasks on an existing map no new ones. The list for the Destiny updates is long indeed and if you want the full length specifics then you can take a look at the update in its entirety HERE

Overall this new update is somewhat cool but it’s just not enough to keep even a loyalist interested for longer than a week. I think Bungie would be better served updating the raids which are the best element in Destiny and giving it some new boss battles and even changing the dynamic of the final boss fights and having it drop special gear than to what they’re doing with this update. The players I talk to would love this and may even pay for it. Also they need to bring all raid gear and weapons up to Year two levels. That gear is extremely rare and some of it was a pain in the ass to get. It really sucks that you still can’t use any of it. I mean really. Bungie has a lot of work to do to keep its current players involved and attracting some ones. Last thing, can we get the Cabal involved already with a big bad ass Boss? SHEESH!

The Division has quietly taken over Destiny’s place as the most repetitive (in terms of activities) yet insanely and incredibly addictive game on the market right now. They too also had a pretty big and significant update yesterday that overhauled the game a little bit and finally opened up the Incursion that everyone has been waiting on if you have reached level 30 and the end game.

Ubisoft seemed to get right in the first update what Bungie seemed to get very wrong with theirs, especially with having to cough up $20 for it. Right away we get an update that gives life to The Division after you completed the end game. The daily missions and challenge modes get some added difficulty and The Division gets new weapons, gear and identity paths for its players.

The Division has a long list just like Destiny as to what was updated as a whole. It’s impossible for me to go through them all nor would I even if I could but for you data geeks that want to know every detail of the new update, you can check it out HERE. I’m just going to point out some of the big changes and how they may affect you going forward. 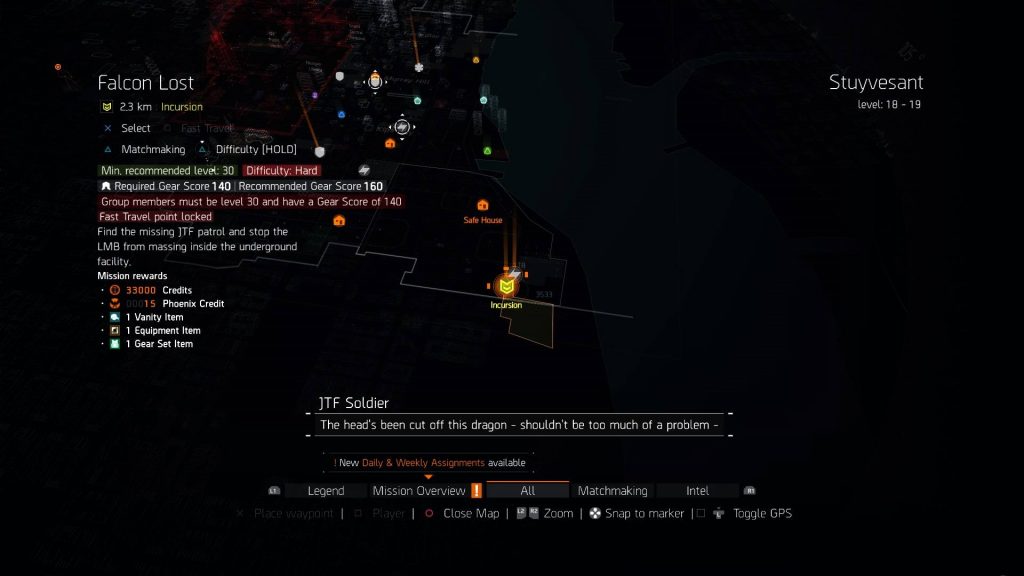 Finishing the General Assembly mission was not the end of the LMB and Frost. Not at all. With the Incursion you have a raid style mission that involves coordination, communication and the right types of gear and weapons to be even remotely successful. It’s the most difficult yet the most fulfilling part of The Division currently. This is why you go to the Dark Zone and farm and this is why you do your dailies and challenge mode missions. Loot. It all becomes necessary here, and even with all that great gear you had better have a plan because the enemies here are no joke and there are NO checkpoints so if your team wipes. Start it all over. 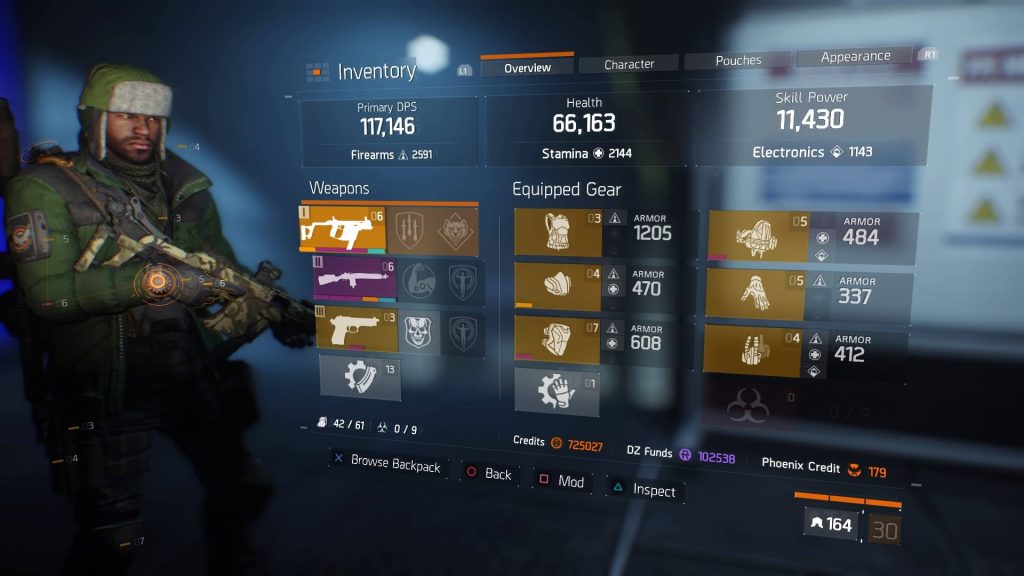 Like I mentioned before having the right gear is paramount and it’s gotten an upgrade. Not only has the ability to drop more of the coveted yellow high-end gear been increased, you now have the newer green gear which you can use to kind of plot the path of the type of player you’re going to use for the Incursion. You have four different play styles now and complementary gear. They are: Tactician’s Authority which enhances electronics and support capabilities, Striker’s Battlegear which provide bonuses for assault capabilities, Sentry’s Call which enhances marksman capabilities and Path of the Nomad which provides bonuses for lone wanderers. The play styles are linked directly to the new gear. 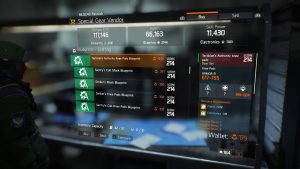 With the new gear comes a “gear score” which in principle is similar to the Destiny light level system to where as the activities you can access are determined by this averaged score. It may be a good idea I guess but I’m not sure how I feel about this because the recommendations for the gear scores never match up with the activity you wish to access. For example, the Incursion has a recommended gear score of 160 but even at 178 which is my current gear score and my companions who were all 180 and better we failed miserably against the enemies in the Incursion. The enemies were really hard. The other glaring issue I noticed with the gear score has to do with the type of gear you wear. The high-end yellow gear isn’t always the best gear when it comes to your DPS, Health and Skill. Typically you have to mix and match your gear with your purples, blues and yellows to maximize your character attributes. With the new system you’re almost forced to use high-end yellow and green gear which in my case caused my attributes to dip really low and much more so than when I mix and match. That sucks. Gear trading is allowed in The Division now but it’s super strict. It’s limited to an hour after you received the item you wish to trade and restricted only to the members of your group. It’s a step in the right direction at least but could have been a bit better.

The Dark Zone has a notable and interesting change as well. You now have hourly “Supply Drops” that you can get weapons and gear from. It’s a scramble for all teams to get it and whoever gets it claims it. The good part about it is that once you get it can’t be stolen from you by rogues. Good job Ubisoft for seeing how bad that would go if that wasn’t included. Ubisoft also managed to do some patchwork for the cheaters out there who just can’t help themselves and play fair. The Dark Zone can be a really shitty place to be when there are cheaters, bad enough there are rogues.

Overall both updates for both games do help both games. One more than the other. The Division got better with their updates and Destiny kind of had a lateral set of changes with not too much to offer but some cool changes nonetheless. It remains to be seen how involved players will be after about two weeks because these players nowadays complete games and tasks fairly quickly. As long as Ubisoft and Bungie keep the updates coming the players will forgive even bad ones. We’ll see how it goes.