Tekken 7 dropped a major OMG bomb on us last month, as a new fighter arrived to the Iron Fist Tournament, Akuma. Is this the hint Harada gave us when he mentioned a surprise is needed before Tekken x Street Fighter ?

When Street Fighter V line up of characters was revealed the infamous Akuma was nowhere in sight, so of course everyone assumed that he would be DLC. That was debunked as Bandai Namco announced that his talents was heading over to Tekken 7: Fated Retribution as a guest character. We’ve experienced a cross up from the two major fighting games before with Namco x Capcom in 2005 and Street Fighter X Tekken back in 2012, but since then, a planned Tekken x Street Fighter was never released.

Tekken x Street Fighter was first announced at San Diego Comic Con on July 24, 2010 along with Street Fighter x Tekken. The game was set to be developed by Bandai Namco and would feature the 3D fighting game engine of the Tekken franchise as opposed to the 2D fighting game style that was featured in Street figher x Tekken from the Street Fighter franchise. As years progressed from the release of SF x T and Tekken Tag Tournament 2, many wrote the 3D fighter collaboration off.

The two awesome friends Yoshinori Ono (Father of Street Fighter V) and Katsuhiro Harada ( Father of Tekken 7) countless times have said that Tekken x Street Fighter is still in the works. Harada last year expressed that the title had so many delays due to a lot of working titles from the two companies.

According to Eventhubs, in an interview last year with the famous Japanese video game magazine, Famitsu, Harada mentioned that because it was announced awhile ago, some type of twist or surprise is needed before the release of the game in order to make things fun. He also mentioned that since it is a working title the game itself might have a different title come release. 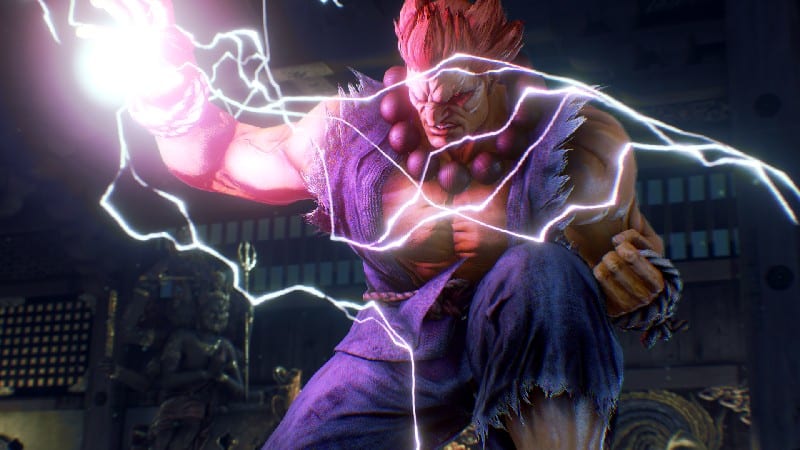 Well if this is the twist that Harada was referring to, then really has shaken things up a bit. Not only is Akuma a guest character but is also is canon to the Tekken storyline with a major role. Akuma’s premise for being in the story has only been revealed that he is indebted to Kazumi Mishima, the mother of Kazuya Mishima and wife to Heihachi Mishima. Akuma has promised that he will kill Heihachi, but no details were released as to why.

This scenario of Akuma vs Heihachi serves as a taste to Tekken x Street fighter as not only will we get to witness Akuma’s “Satsui no Hado” (Dark Hado) in 3D but also a story prolong that will follow up to the long await cross title.

Let us know if you are still interested in Tekken x Street Fighter and if you are hyped for Akuma being in Tekken 7 in the comments below. Tekken 7: Fated Retribution is set to release February 14th in Japan but no official release date has been made yet for the states on consoles. We’ll keep posted.