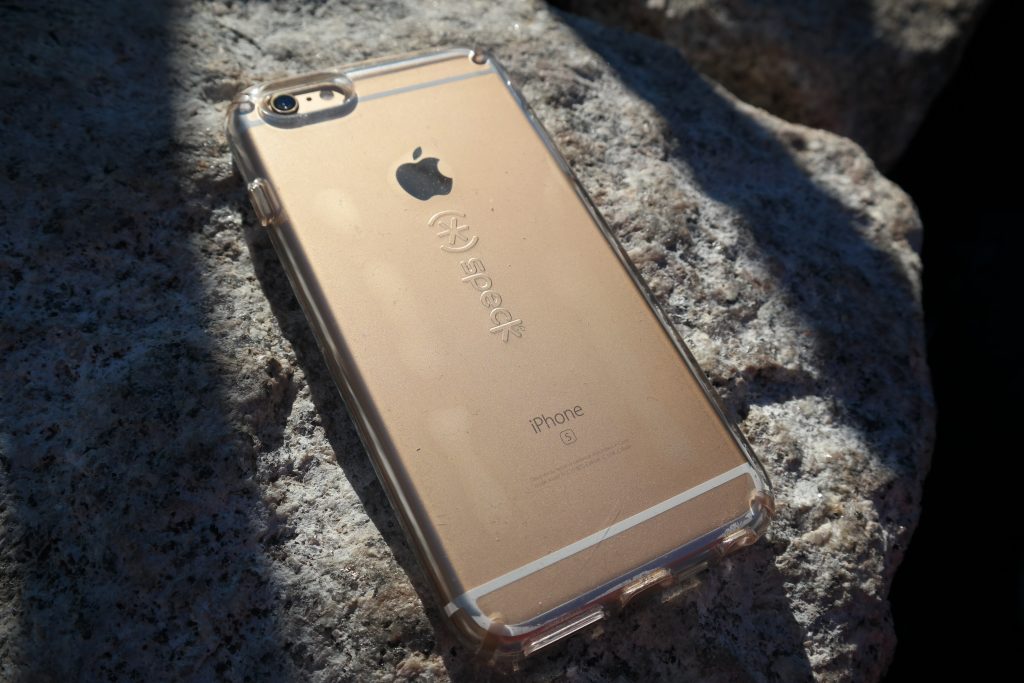 So things happened a few months ago, I got an iPhone(gasp!) and Speck has come out with a clear version of its CandyShell case. If you have dealt with Speck’s CandyShells before they are pretty tough hard cases with a nice shiny gloss to them. I have covered them for android devices before but this is my first time trying one out with an iPhone. Better yet this one is clear and is supposed to add protection and still gives my iPhone 6s Plus the opportunity to show off its gold colorway. Also Speck states this clear case will never yellow which I have seen with EVERY clear case I have ever used on smartphones. Will this really be any different?

There isn’t much as far as design or style with the CandyShell Clear Case by Speck. Its pretty much just clear and that’s about it. Build wise its exterior is made out of polycarbonate while the interior uses TPE layering. This pretty much makes it somewhat of a dual layer casing but without the extra pieces. It has bezels that rise above the glass to help protect from cracking the screen but of course depending on how you drop it accidents can still happen. Applying the case is easy with you just popping it on just as easy as it is pulling it off. It does add a bit of weight to the iPhone but for some it’s necessary and I don’t mind it much.

The big thing Speck told me about this case besides the protection is that it never yellows. Now i have heard that before and seen many cases sadly slope down that road within a month or two. I been mostly using the CandyShell Clear case since it launched back in October and its now January. Safe to say I haven’t seen an ounce of yellowing or warping. Mind you I have done the usual accidental drops, spills, you name it and the case is still intact.

Using Speck cases for quite a while they have a pretty good track record as far I’m concerned regarding durability. I have dropped the iPhone in this CandyShell Case on pretty much everything from hardwood floors, marble, carpet, and even some concrete and its held up remarkably well. Also as stated before no signs of yellowing what so ever either. Only gripe about using the case is of course that is prone to get lint, specks of dirt and even some bit of hair under the casing. Since it’s all clear it can be unsightly at times. Even with that said it wouldn’t be a deal breaker for me and stop me from getting the case.

Having used the CandyShell Clear Case by Speck for the past few months I felt it has held up to the everyday use I endured with my iPhone 6s Plus. Phone has been well protected and hasn’t received any damages what so ever. Casing has maintained being non-yellow and is still holding up nicely. Only gripe is that dirt particles, and other things can get inside the casing and make it look bad at times. Other than that I’d recommend the CandyShell Clear Case if you want to show off your iPhone 6 coloring and have great protection at the same time.

The CandyShell Clear Case for the iPhone 6s Plus is $34.95 on their website.