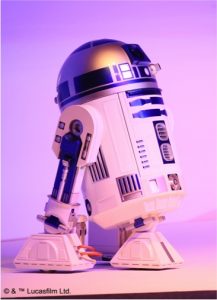 Get ready to totally geek out because I know I did when I saw this. How many of you have always wanted to own your very own, life-sized R2-D2 droid? The closest I’ve ever gotten to that dream was an 8-inch plastic R2-D2 mug I got at Disney during Star Wars Weekend. Well, my dream of owning one just became more of a reality as Haier just announced that they’ll be showcasing a new, life-sized R2-D2 Moving Refrigerator at CES 2016.

R2-D2 Moving Refrigerator is remote controlled and will feature built in authentic light and sound effects. Not only that, there’s also a fully functional, built in video projector. Developed and produced by Haier Subsidiary Haier Asia in Japan, the fridge is made to order and comes with a serial number, making it a collectible item for any serious fan.

I don’t know about you, but if you’re a serious Star Wars fan, this might just be the droid you’re looking for.

5 Tips for a Successful Mom-Student