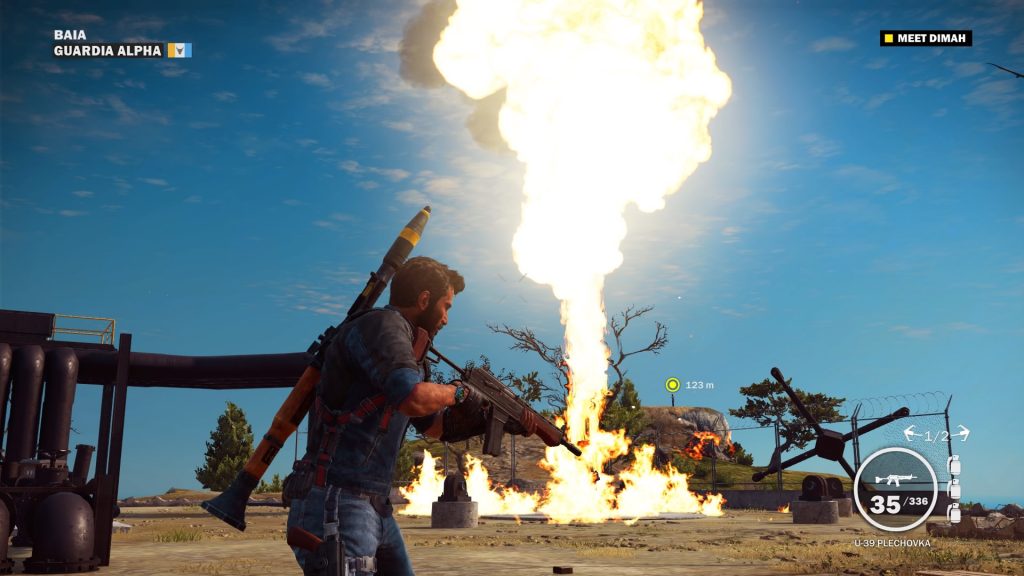 Believe it or not three months Just Cause 3 wasn’t even on my radar until I got some hands-on time with it thanks to Square Enix at one of their events during Comic Con here in New York City. I watched one of the developers play and thinking to myself this game looks outrageous and I can’t do half the stuff. Me and my colleague picked up the controller and I spent so much time just doing craziness I couldn’t wait for its December 1st release date. With that being said I spent the last week or so with just gaming on Just Cause 3 and there are some very high points mixed with a bit of lows. 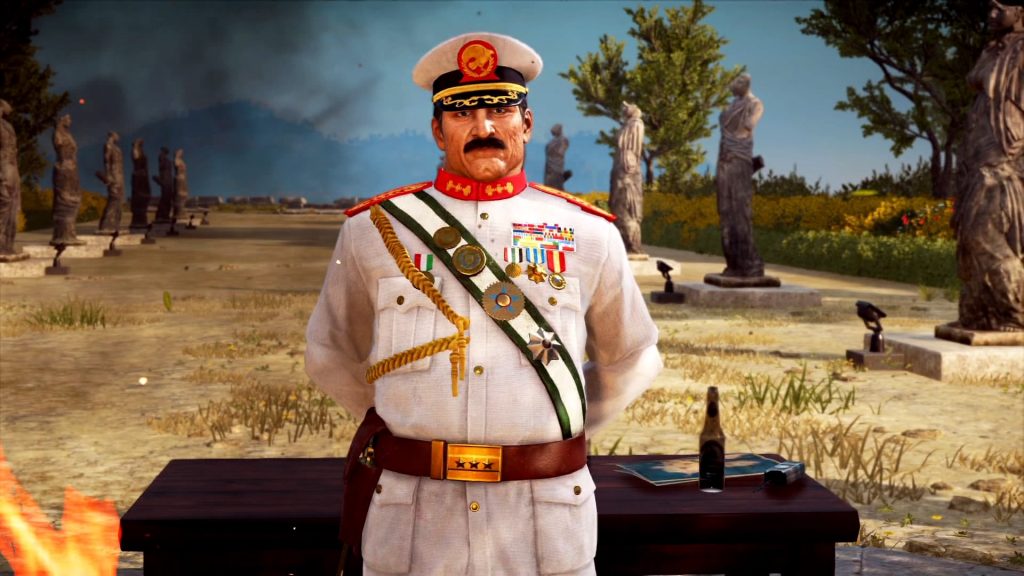 To get you up to speed Rico Rodriguez is the main protagonist for Just Cause 3 as well as its predecessor titles Just Cause and Just Cause 2. Rico is basically a secret agent or gun for hire that has been known to taken down various governments for the result of changes for society. In Just Cause 3, Rico returns to his fictional homeland of Medici which is a massive Mediterranean island that has been taken over by dictator General Sebastiano Di Ravello. Rico meets up scientist Dimah al-Masr and childhood friend Mario Frigo(who’s quite a character) and plots how to disrupt Di Ravello’s plans for world domination. The premise is really simple, go to these different provinces, bases, islands and get the General’s people out of power. 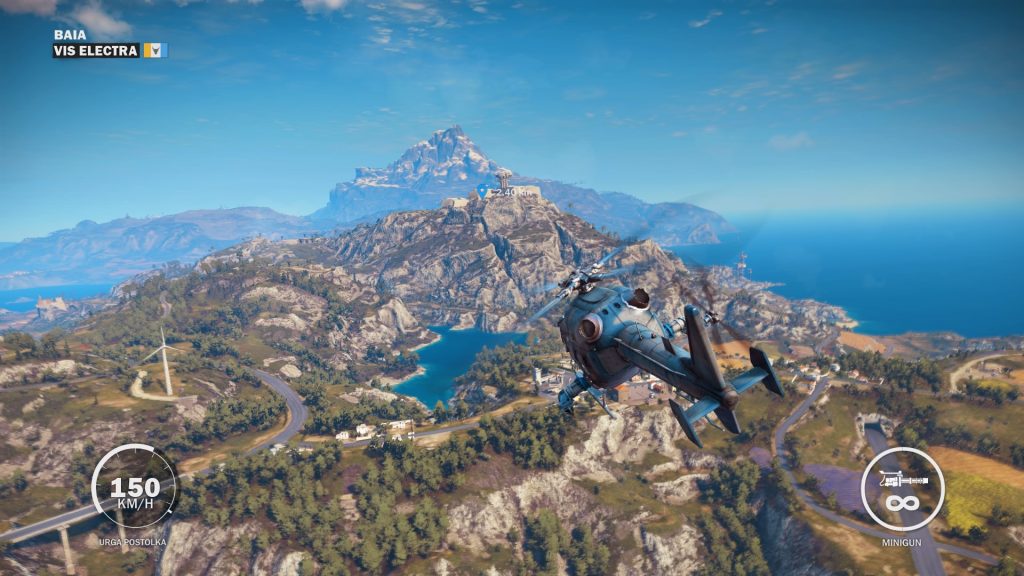 You don’t have to be a fan of the previous Just Cause games to easily pick this game up and play it. When you first start the game they will have you stranded on a deserted island while the game “installs”. This gives you time to learn how to shoot your weapons, use your grappling hook and master the wingsuit. Also there is some cars to drive around and plenty of stuff to blow up.

There are tons of upgrades in Just Cause 3 and they obtained by doing Challenges. Usually the Challenges range from you flying with your wingsuit through rings or shooting a bunch of stuff in a particular time. The faster you do it, the more “Gears” you get. Use the gears to unlock content that can be turned on and off with a switch. Now you don’t even really need the upgrades to go through the game but they make things funnier.

Basically in Just Cause 3 is destroy everything is sight. Of course there are objectives to achieve but you can realistically various methods to your goals. Need to take down statues? You can tether to it and pull it down, or maybe tether a car to it? Or perhaps slap some explosives, walk away and detonate. The possibilities are endless and I found myself trying to do something different each time.

Graphically the game is gorgeous and is very large in scale. I think I have traveled from various island for at least 10 minutes straight with zero to no lag. If you check out the video I posted below you can see how I spent a good amount of time hovering in the air via wingsuit and that wasn’t even the highest point. Mastering the wingsuit and parachute mixed with the grapple hook beats driving around. Cars in this game are better for just blowing up to cause destruction.

Also the map is pretty much open from the start of the game. Of course going to some islands or bases will bring some challenges as some will have some heavy artillery but it makes it fun at times if you can bypass them and win. Interesting story where I destroyed a base one time and I had a mission to go to a base unlock some stuff and so forth. So I get there and everyone is already dead since I came there earlier and wrecked havoc. With that the mission only took me five minutes. 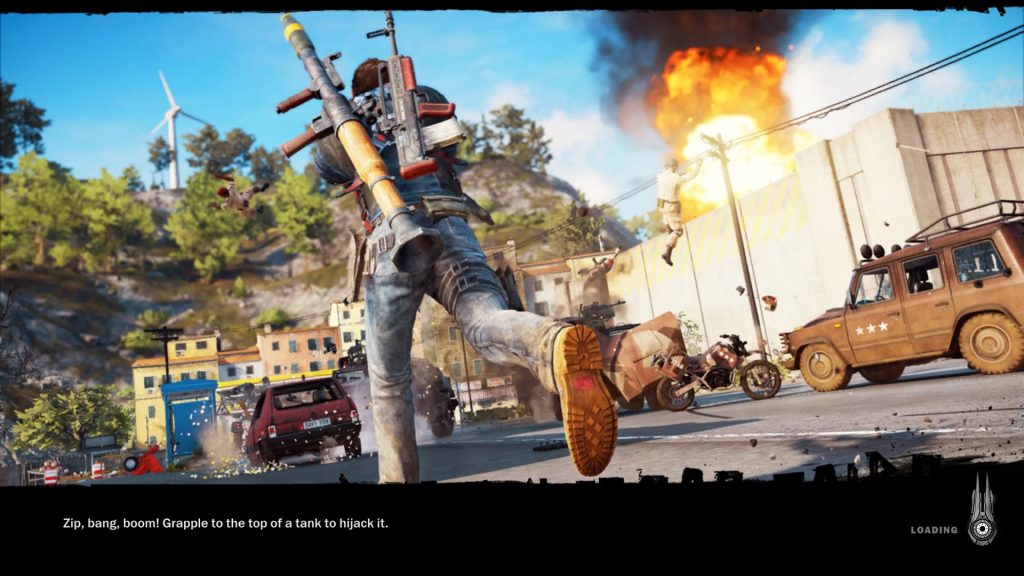 I don’t think I have ever played a game where I wanted to make sure I never died. Load times in Just Cause 3 maybe some of the worst I seen in my life. The crazy thing is the time isn’t even consistent and I had used a timer where it ranged anywhere from 30 secs to a good 3 minutes. Sad thing is this was just for the Challenges which are most likely destined to fail within 30 seconds so you will have to do over and over and over. I’m hoping there is some patches that come out to alleviate this pain. Offline mode can take some time off but it still needs some work. 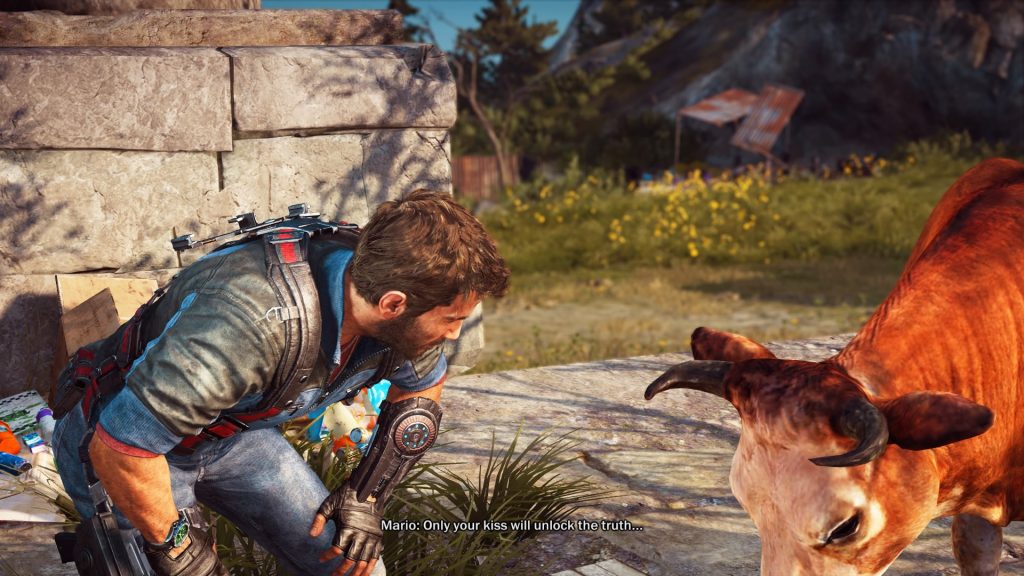 The story line is pretty simple and even the objectives you do are pretty much the same. Liberate some provinces, destroy some bases and wash and recycle. It can realistically get tedious but as I mentioned earlier if you can find different ways of doing things and there are hundreds of ways it might not be so bad.

Shooting with weapons can be hell from up close at times too. The aiming is off you can sometimes find yourself in a world of trouble in close combat. I did find shooting a bit earlier once I unlocked the “Third Person Shooting” Gear. If you have issues shooting you might want to invest in that.

There is also some glitching here and there in the game. The PS4 version is supposed to be the superior version of the two console versions so I hate to see how it plays out on the Xbox One system.

For a title I had never dealt with before I think I have grown a liking to Just Cause 3. It’s very easy to pickup and play and its open world environment is amazing. The mountains, towns, and ocean look very vivid and exploring all of them is pretty fun in my eyes. Load times are the biggest hamper of Just Cause 3 and hopefully the team at Avalanche Studios can do something to make getting back into the game easier. Sometimes the waits can be a mood killer and will leave you wanting to go do something else. Besides that if you want to blow stuff up in fun and intriguing ways then you may want to take a look at Just Cause 3.