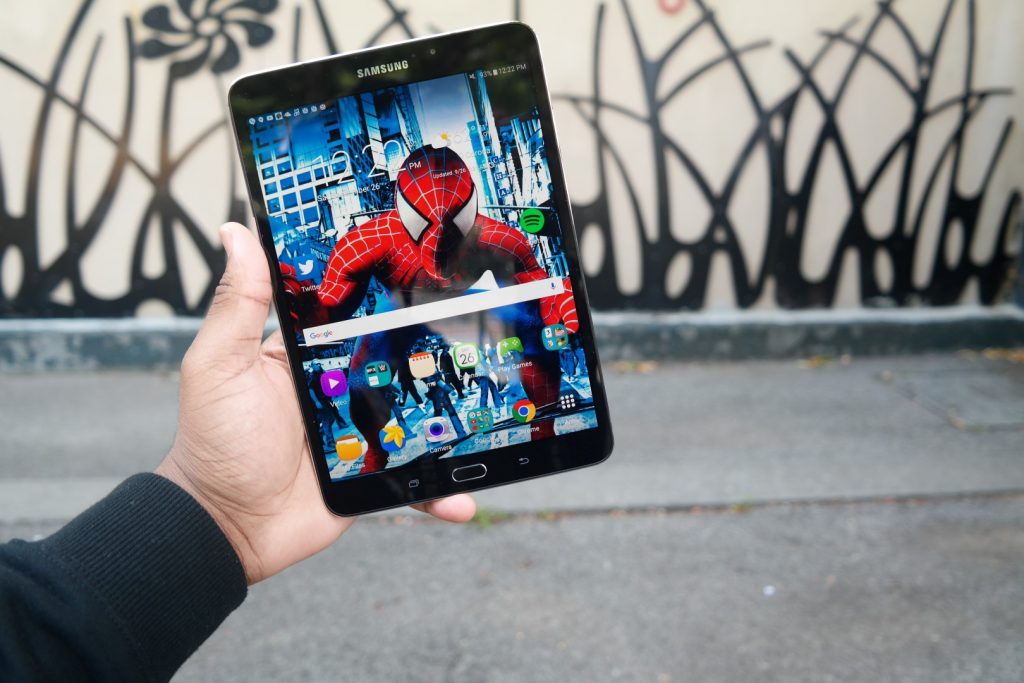 Samsung known for its variety of tablets ranging from low-end to premium quality launched its Samsung Galaxy Tab S line in 2014. This in turn became one of my favorite tablets of the past year. It had stereo speakers, gorgeous 2K display, and was one of the thinnest and lightest tablets on the market. So it would come to my surprise when Samsung would tout its Tab S2 as being thinner, faster and lighter then it’s predecessor. Well I have spent the last month with the Tab S2 and here is my results. 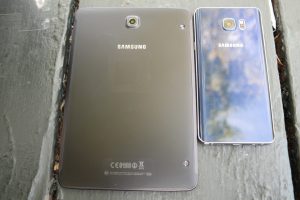 Gone is the faux leather they used on the Tab S(reminiscent of the Galaxy S5) and here is this smooth matte plastic build. It’s kind of suede-like actually. Thinner than Samsung’s own Galaxy Note 5 / Edge S6+ smartphone which are pretty slim already, the Tab S2 is very weightless coming in at 265g. Missing this year is the 16:9 wide viewing angle and back is the 4:3 book reading ratio instead. With this being done instead of the stereo speakers on each side which I loved on the Tab S, they are on the bottom with a headphone jack and microUSB port nested between them. Let’s face it I love either front facing or side speakers, I have a tendency to cover back or bottom speakers with my hand and have to learn to adjust unfortunately. Besides all these changes the Galaxy Tab S2 is one of the lightest & slimmest tablets you will feast your hands on. It definitely makes touting away in your bag a breeze.

Much was done on the hardware side of things with the Galaxy Tab S and specs haven’t jumped up much for the Tab S 2 as far as screen display is concerned. This year they are using a resolution of 1536 x 2048 pixels which is still a SUPER AMOLED QHD display with 264ppi. They actually decided to lower the pixels and ppi compared to the Tab S which maybe resulted in a thinner tablet. It still looks great while watching movies, browsing on YouTube or checking out a good e-book or two. 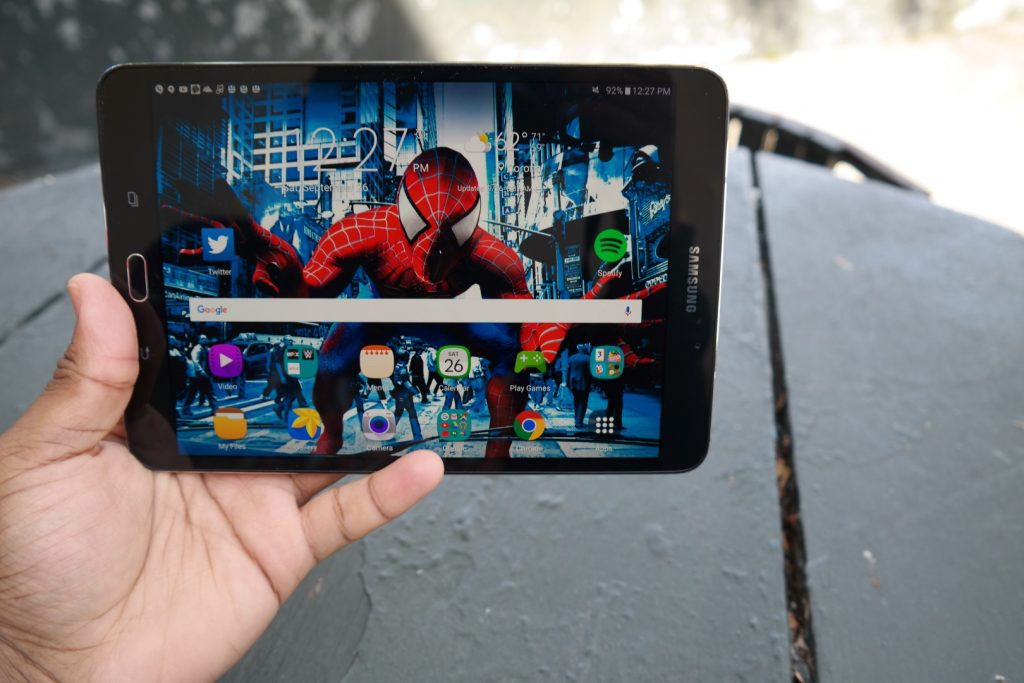 The Galaxy Tab S wasn’t a slouch in the power department so I wouldn’t expect any difference from the Tab S 2. Inside you have a Octa-core Exynos 5433 chipset, 32GB storage, 3GB RAM, and a microSD card slot that holds up to 128GB. Wireless capabilities are great with it using Wi-Fi 802.11 a/b/g/n/ac MIMO (2.4GHz/5GHz) , Wi-Fi Direct and BT 4.1 BLE for syncing purposes to other devices.

The Tab S2 runs through apps whether full screen or in multi-view mode which is a sight to see on this tablet. It seems to handle them slightly better than the Tab S which gave you a hiccup here and there. Surprisingly the Tab S2 has a smaller 4,000mAh battery compared to the Tab S which houses 4,900mAh. This could be contributed to the smaller and thinner design and these are sacrifices that had to be made. Sadly the IR blaster is gone as well. As it was quietly removed from Samsung’s smartphones I expected to see it still on their tablets at least as they are more used in the home.

Lollipop aka Android 5.1.1 combined with the strong hardware specs of the Tab S2 makes it run buttery smooth. The fingerprint scanner works just as good as it does on Samsung’s Galaxy S6 devices and Note 5 if you want to lock up your tablet. I do miss the Magazine UX feature/app they have in the Tab S though. It held an assortment of apps you might use such as SideSync, Calendar and others and was just a left swipe away. Instead its been replaced with good old Flipboard which I never use and usually disable.

As I always say I never really use cameras on tablets. It’s just not feasible to me especially when I can just quickly grab my smartphone. Now this isn’t saying I didn’t take a couple of pictures for review purposes. The Tab s2 is outfitted with a 8MP camera on the back while you get 2.1MP on the front. I did test it out in some areas and pictures come out at adequate for any normal use you wish to do with it.

On the video side the Galaxy Tab S2 does shoot up to QHD(2560×1440) on the back which is good if you want to get some nice quality footage in. It’s not the 4K recording you are accustomed to on say the latest Samsung Galaxy but its a start and I imagine will make it into the next version down the pipeline.

It’s a mixed bag with the Samsung Galaxy Tab S2. I think I may have gotten so used to the 16:9 aspect ratio and end to end stereo speakers of the original Tab S it is hard for me to adapt fully to the Tab S2. The Galaxy Tab S2 does excel though in its multitasking with split screen options, excellent screen quality and its combo of feathery light and extremely thin design features.