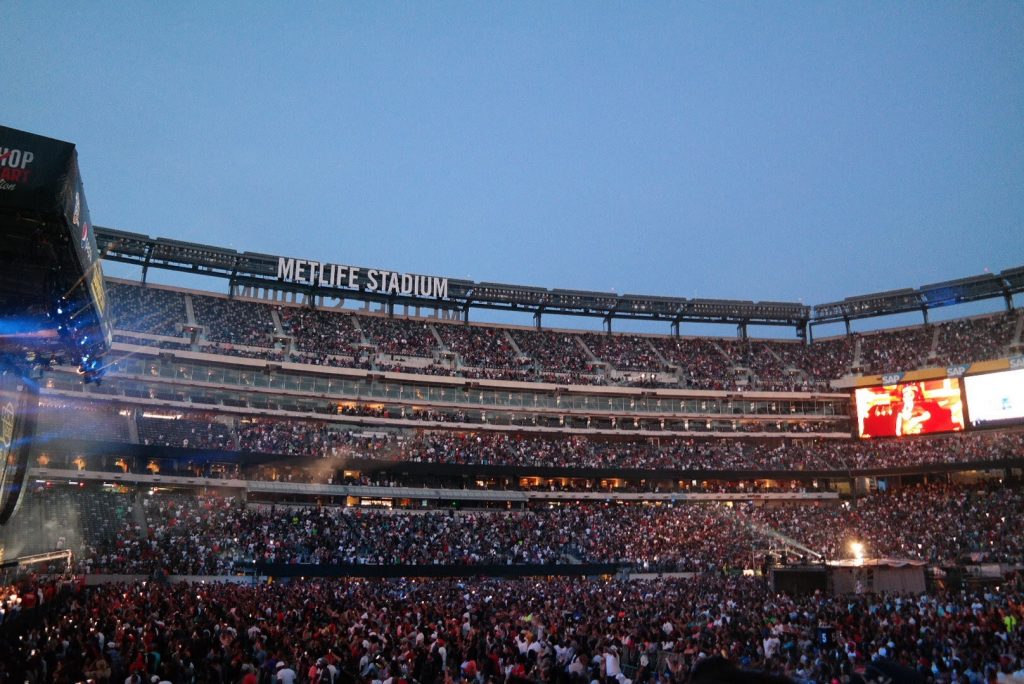 Even though there are dozens of summer concerts heard every year by radio stations no one stays out farther then HOT 97 with their annual Summer Jam concert. They had a lineup of rising stars that begun out on the Festival Stage earlier in the day which later built up the main stage for some of the biggest acts in Hip Hop today. Luckily all the mayhem that went on outside the gates of MetLife Stadium that evening stayed out there and concertgoers inside the venue were unaware. 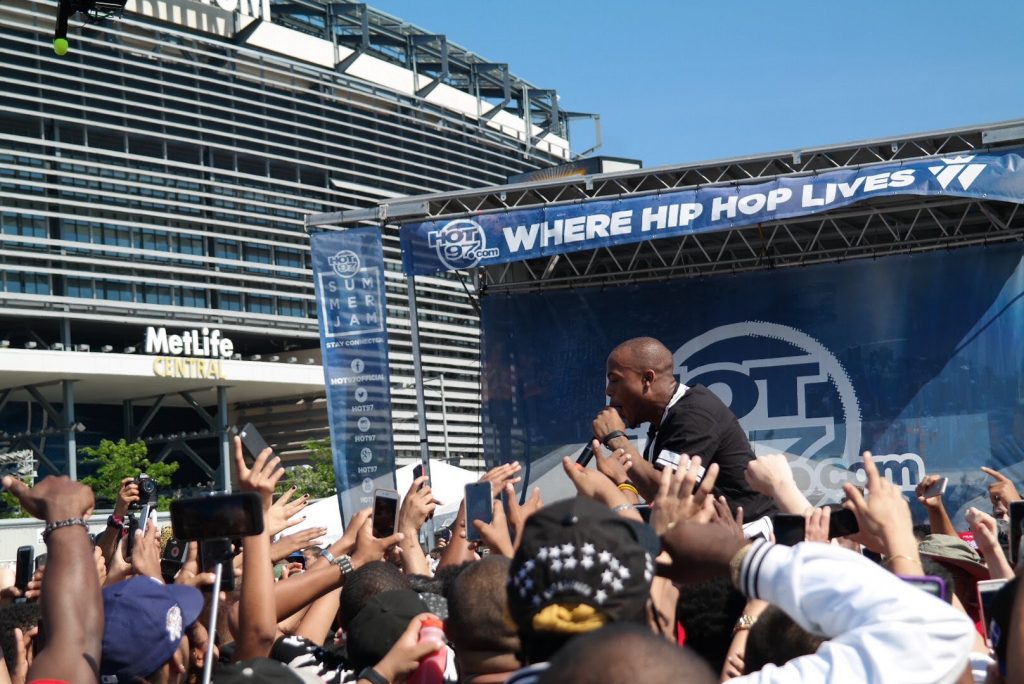 Outside setup in a parking lot close to the stadium was the huge festival stage showcasing musical stars in the making or trying to establish themselves towards that next level. GOOD Music R&B artist Teyana Taylor was on the stage performing some tracks from her VII album including single “Maybe”. She’s always been known to embrace the 90s rolling finger waves and big jerseys from that era. When she decided to go down memory lane performing some old classics to our surprise Total (2/3 members) came out on stage and did a quick melody with the artist. Dej Loaf hit the stage next to performing her viral track “Try Me” which blew up the airwaves last summer while B.O.B.
Houston native Travi$ Scott went into “rage mode” rocking a yellow bubble jacket during his set. He fired up the crowd with tracks such as “Mamacita” and “Upper Echelon”. Known for not giving a damn about what else is going on, Travi$ was going into his new track “3500” and happened to turn around and peep a Hot 97 cameraman on set. He told him to get his nerdy ass off the stage and went back to rapping. It was actually pretty funny. This was my first time seeing Travi$ LIVE but I can see how he gets the crowd hyped up. Joey Bada$$ closed out the festival stage bringing his gritty Brooklyn style to Summer Jam. He went thru some of his older independent tracks to a few off his latest album “B4 DA.$$” such as “Christ Conscious” and other hard hitting songs. Unfortunately I didn’t get their earlier to see Charles Hamilton open up the Festival Stage Show. 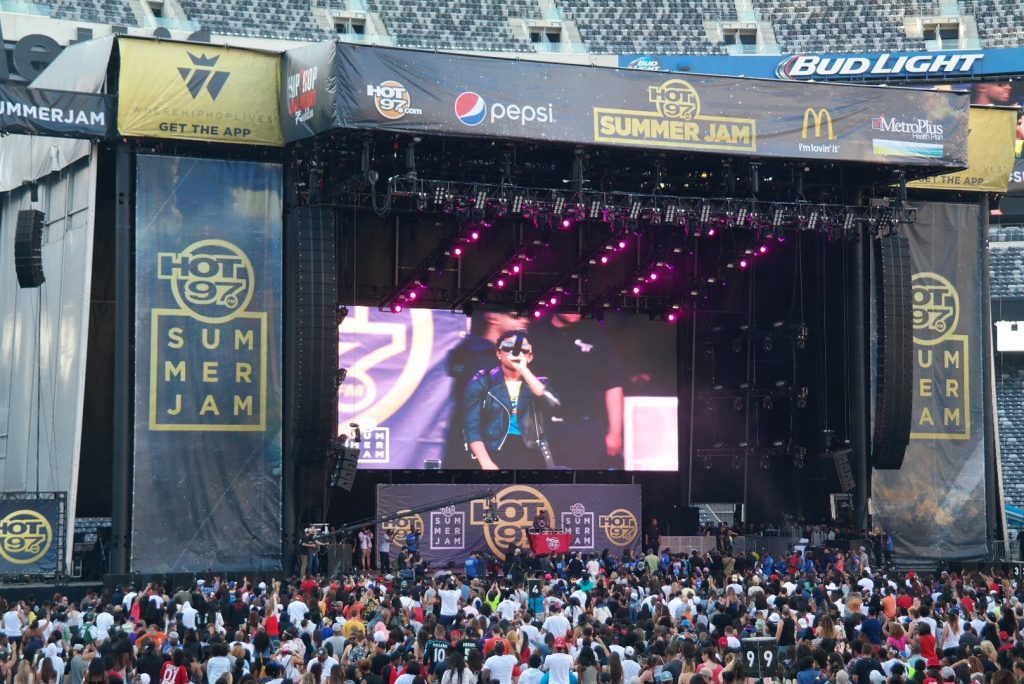 The opener for the show was Omarion who came out repping MMG but none of them were actually around. He danced around to tracks not even his and then did a snippet of “Post Ta Be” and playing the infamous verse that ladies have been loving as of late. I expected him to do some more of his tracks even if they were older. He came and went and the audience didn’t even seem to care. Ty Dolla Sign hit the stage next performing some of his hits from last year such as “Paranoid” and “Oh Nah” before having the owner of Taylor Gang aka Wiz Khalifa come out and excite the crowd and perform “We Dem Boyz”. He also had Dej Loaf come out and do “Try Me” but you wouldn’t been as hyped to see her if you peeped her at the Festival Stage a couple hours earlier.
Chris Brown’s set didn’t look as great as we previously seen him but he had some surprise guests to save the day. 50 Cent and the G-Unit crew came out and performed “Many Men”, “What Up Gangsta” and a couple other tracks. This was a surprise to see as they performed last year and caused a ton of mayhem with chains stolen and such. 50 did say on Twitter they had to be patted down before coming in. French Montana came out during Breezy’s set as well performing his “Hot Nigga” remix to get the crowd going a bit.
The surprise of the night came from Fabolous. While his set was labeled “Fabolous & Friends” who knew the plethora of artists he would have come out. We got a small Terror Squad reunion with Fat Joe and Remy Ma, Mobb Deep coming out with “Shook Ones” then doing “Quiet Storm” bringing out Lil Kim. She did a couple of tracks such as “Get Money” and “Money, Power, Respect” which brought out The LOX. It was like the 90s all over. Surprise after surprise and would have to be the best part of the night. It would been a dope closer for the show realistically. We also got surprises from Ma$e, Red & Meth, Raekwon, Busta Rhymes and Black Rob. All we needed was Puffy dancing around the stage and we been set.
Next up was Kendrick Lamar who was actually stated as the headliner but for whatever reason came out earlier. He did hard hitting songs such as “The Blacker the Berry”, M.A.D.D. City, Swimming Pools and other hits before switching over to Collard Greens and bringing out Schoolboy Q. I been to a ton of Kendrick Lamar shows and the audience just seem so deflated during his set. Idk if it was coming after Fab’s set or the audience just didn’t care.
Big Sean came out to perform some of his big tracks such as one that got him started in the rap biz with “My Last”. He went on to do other tracks such as “Blessings”, “Clique”, “I Don’t F**k With You”, and “Play No Games” but once again the audience while thrilled didn’t seem to be into it as much. I think they were expecting some surprise artists come out from Big Sean as a good amount of his tracks he did usually have features but sadly no one ran out on stage.
Surprise closer was Meek Mill which actually woke up the audience. Maybe Hot 97 predicted this but he did get the fans alive running thru a load of songs before bringing out last year’s headliner aka his girlfriend Nicki Minaj to the stage. She did a verse of “Only” and “Truffle Butter” before telling Meek she loved him and went to the back. He later brought out Future to do “Commas,” “Real Sisters” and “Trap N***as” to close out the show.
Well the main show because oddly Troy Ave came out to do some songs and then Fetty Wap to a half empty arena. This isn’t the first time Summer Jam has thrown artists on at the end of a show as they did it with DJ Mustard last year. 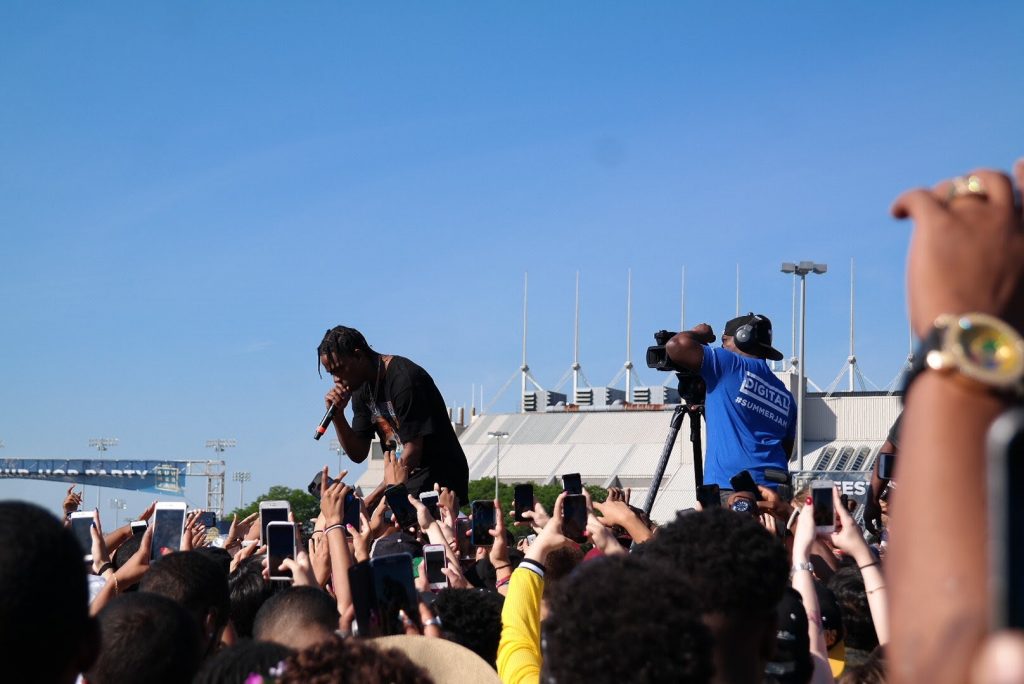 Overall this was my first year attending HOT 97’s Summer Jam and I did enjoy myself. The surprise artists during Fabolous set was definitely welcome if you came from the 90s era and the artists seem to all have long sets. It was a killer though at times hearing the DJs play the same songs over and over and over again between sets. Also throwing artists at the end of a show when people are walking out the stadium is awkward. I was actually by the concessions when Troy Ave came out and decided to go back out to the stadium seats to get a look. I just think if HOT 97 really put their foot into it they could have one of the best collective concerts every year even without the drama that accompanies it every year.