Video Games: The Movie was made possible due to successful Kickstarter campaign run by Writer and Director, Jeremy Snead, whose goal was to create a documentary about the video game industry and the culture it’s spawned.

This feature length documentary, aims to educate and entertain audiences about how video games are made, marketed, and consumed by looking back at gaming history and culture through the eyes of game developers, publishers, and consumers. It also asks the question of what it means to be a ‘gamer,’ a game maker, and where games are headed. 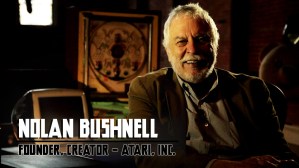 I am a member of the video game boom; I still remember the days of playing the Atari 2600, the Vectrex, and the NES. If any of this sounds foreign to you, please don’t google it. Anyone from my generation of Gamers can tell you, there’s no way we could have ever imagined gaming would go as far as it has now. The realistic graphics, the cinematic sound, multiplayer gaming – with anyone around the world, not just your living room. Becoming the controller in a whole new wave of interactive gaming. No one could have ever conceived gaming on your cell phone, let alone the boom that followed. So please keep in mind I watched this documentary from the perspective a nostalgic man remembering the past, embracing the present, and still looking forward to what new generations will bring.

The Documentary achieves part of its goal; it educates gamers and non-gamers in the history of gaming and consoles. The film is entertaining, for the first half hour. It has a lot of amazing footage – early days of pre-console gaming, classic game TV advertisements, and great interviews from celebrities, game designers and gamers. The huge problem is it’s edited quite horribly. Instead of a documentary being told in chronological order, after that first half hour, the chronology becomes rather sporadic, jumping back and forth throughout the history of gaming. From a storytelling perspective, it just isn’t very good. I wanted to love this film because I love gaming, though I found myself shaking my head in disappointment at the end.

If you are a video game fan, there’s enough information here to entertain, but not enough to get you to want to stick around until the end. For the non-gamer, the film is so all over the place it may just do more harm than good.