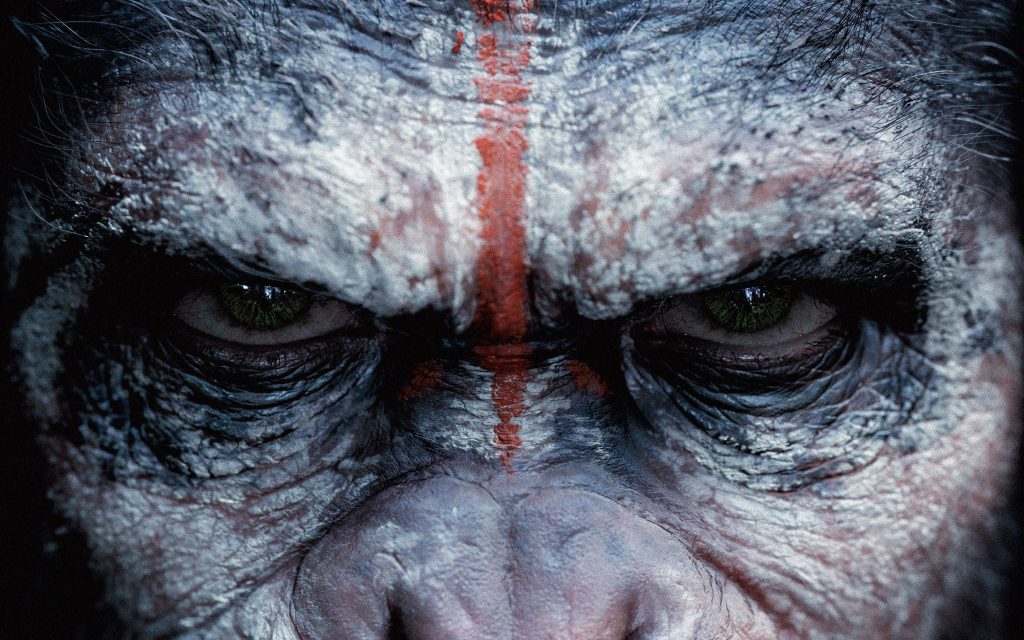 The original “Planet of the Apes (1968)” is based on the 1963 French novel “La Planète des singes” by Pierre Boulle. Since then there have been 8 (soon to be 9) films based and inspired by the series.

This is the very first time, a motion capture (mo-cap) character is the lead of a film. 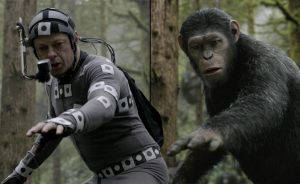 Cyber-thespian Andy Serkis is best known for playing Gollum in, “the Lord of the Rings” Films to Caesar in this one. In 2011 he founded The Imaginarium Studios with producer Jonathan Cavendish. A studio specializing in applying motion capture technology in television, video games and films, like Rise and Dawn of the Planet of the Apes. Serkis is currently assisting Mark Ruffalo on his mo-cap performance for The Avengers : Age Of Ultron (2015).

Sequel to the film ‘Rise of the Planet of the Apes (2011)’, ‘Dawn’ starts where the last film leaves off. They showing the devastating effects of the ALZ-113 or “Simian Flu” virus epidemic through news clips. Humanity has essentially collapsed and it’s already been many years since the apes have seen any humans. Caesar, the genetically enhanced ape and protagonist of ‘Rise’ now peacefully governs and leads a new generation of apes in the Muir Woods, outside of San Francisco. When a human scouting party literally comes face to face with the apes, things change drastically. 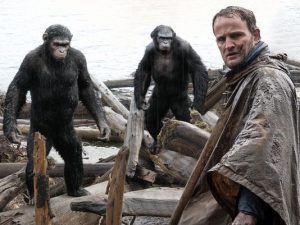 With resources running scarce, the humans need access to a hydro-electric dam located near the ape colony. Not without resistance, Caesar forms a temporary alliance with Malcolm (Jason Clarke), co-leader of a human group. A resistance within the ape colony start to form. Caesar was raised and still remembers the good in humans and is willing to give the benefit of the doubt. His second in command Koba (mo-cap’d by Toby Kebbell) sees this as a weakness, as he only remembers the harsh cruelty he endured in the sanctuary. Koba would have want nothing better than to eliminate all the humans. The other human co-leader, Dreyfus (Gary Oldman) has seen his share of war. As much as he would like to avoid a conflict, his loyalty is to the survival of the human race. With both sides itching for conflict, Malcolm and Caesar try their best to keep both sides at bay. 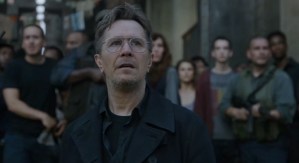 ‘Dawn’ is easily the best film of the entire series. When I say series, I mean every single Planet of the Apes movie from 1968 to this point. The writers and Director Matt Reeves do an amazing job. The themes in the film are deeper and darker. You get taken in by all the perspectives in play, Caesar, Koba, Malcolm, Dreyfus. You understand what’s the driving force in them and why they do the things you do. When the tragedy kicks in, you are just so involved with the characters in this point that you get genuinely upset when things start to happen. Serkis’ Imaginarium and Weta digital did such an amazing job with the ape effects and mo-cap, that I had to remind myself a few times these are not real apes. Serkis’s Caesar and Toby Kebbell’s Koba were simply amazing. Serkis has been long overdue to be recognized as an actor for his mo-cap work, I really hope they work they do here do not go overlooked. Oldman, Russel and Clarke, are good but they play second fiddle to the Cyber-thespians. Dawn is such a great journey I hope you see it.