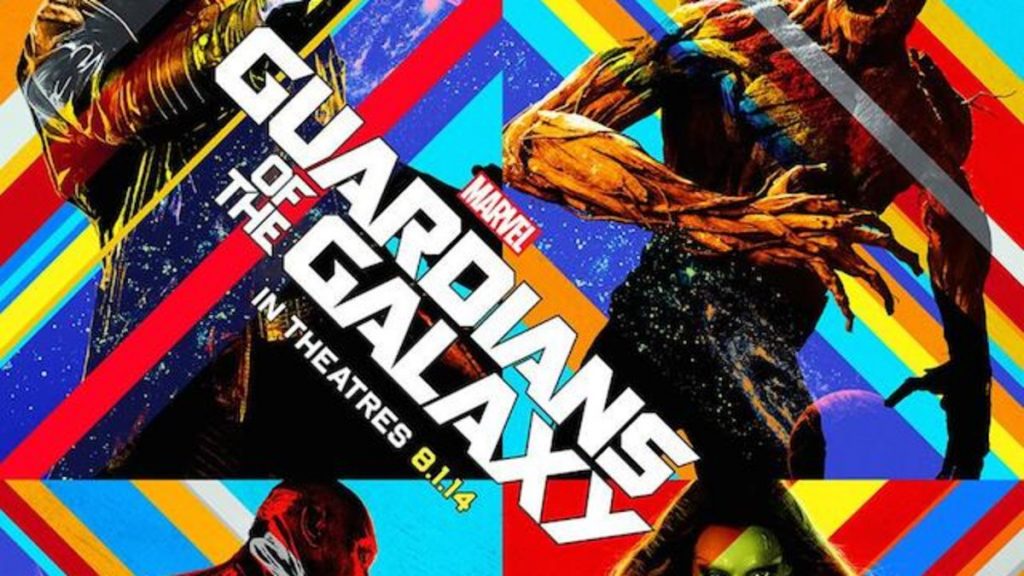 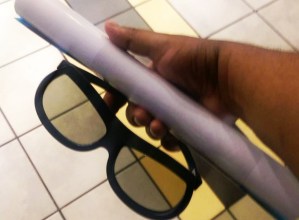 When I first heard Marvel was teaming up with IMAX to bring audiences, fans alike a 17 minute preview of the film. I got pretty excited. As a fan of the Guardians of the Galaxy comics and director James Gunn’s work, I was hoping this tease was worthy. Everyone who attended the event was handed a pair of IMAX 3D Glasses and a Marvel Guardians of the Galaxy IMAX 3D First Look Limited Edition Poster.

There are some extremely detailed spoilers ahead. If you are one of those who are holding back to till you see the film, DO NOT READ.

The event opens with an intro by Director James Gunn. He comments on the following footage has been optimized for IMAX theaters and to enjoy the show. 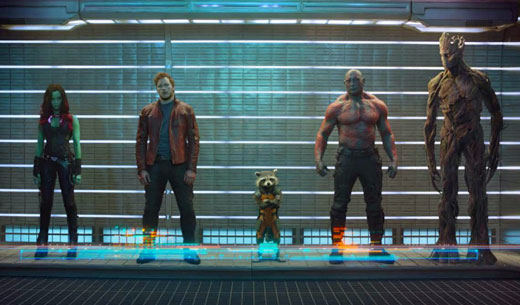 The clip kicks off, with the now famous Nova Corps line-up scene. Where Nova Corps officer Rhomann Dey (John C. Reilly) introduces the characters. Drax the Destroyer (Dave Bautista) is a tall, muscular, grey skinned man covered in what looks like red inked tattoos. Gamora (Zoe Saldana) is a slender, athletic build, green-skinned woman with straight red hair. 89P13 a.k.a. Rocket (voiced by Bradley Cooper) is a highly intelligent, anthropomorphic raccoon. Groot (voice by Vin Diesel) is a tall tree-like creature also with some human-like characteristics. Peter Jason Quill a.k.a. Star-Lord (Chris Pratt) on the other hand is a caucasian male, with an athletic build. If you’ve seen the first trailer of the film, you should be well acquainted. For those who haven’t, it’s a cheat sheet to who’s who and let you get acquainted with the characters very quickly. Where they are from, modifications, how many times they’ve broken out of prison, They touch on Gamora’s connection to Thanos (That’s purple Alien, last seen at the end of The Avengers) and her connections to Ronan the Accuser and Nebula.

Post line-up, we are at The Klyn, an intergalactic prison located at the end of the galaxy. The foursome sans Drax, discuss the orb with Groot interjecting, “I am Groot!”, still not knowing it’s significance but Quill wanted it and Gamora was trying to obtain it separately, but not for Ronan (Her Boss) but a private contractor. Rocket and Quill exchange some harsh words, Quill calling Rocket a, ‘Raccoon’, while Rocket yells back, “there’s no one like me, but me!” Rocket touches on Groot’s lack of vocabulary, then onto what their current situation means to Gamora. A prison filled with people who have a huge hate for Ronan. They walk by what seems like a processing of prisoner property. Quill notices the guard playing with his audio cassette player, ‘a Walkman’. The grey skinned guard is curiously investigating this strange-to-him artifact and accidentally powers on the device, which starts playing the song, ‘Hooked On A Feeling’ by Blue Swede, the guard puts on the headphones to hear it. Quill is not happy with this and narrowly avoids the closing of door of the room and demands the guard to take off the headphones. This confrontation ends with Quill being stunned with what looks like a cattle prod to almost submission the ground.

Quill is now being splashed/hosed down with an orange liquid. The prison’s version of delousing powder, as they stop he’s surrounded by small hovering armed drones. Rocket walks in shortly soaking wet from the same orange liquid, holding on to his yellow prison jumpsuit. We get a preview glance of what makes this racoon very different, there’s a shot of Rocket’s back covered with metallic implants or ‘cybernetic enhancements’. Gamora, Rocket, Quill and Groot are being escorted to general population.

They walk into what looks like the center or main courtyard of the prison, Many of the prisoners recognize Gamora and immediately start throwing things and yelling threats. Quill gets on the threat receiving end but not before someone stands in his way. The prisoner in question is large in build, a few feet taller than Quill, menacing and blue. Just as he starts stating his intentions with Quill, he’s interrupted. Groot shoves his branch-like fingers into the his nostrils as they start growing/extending inside, instantly putting him into submission. Groot then expands, grows taller and wider As the other prisoners slowly go quiet watching on, Rocket takes his stance give a brief speech and pointing at Quill, “Quill is his booty, and rather than someone go through them, Groot will be happy to do so!”. As everyone disperses Rocket gets the group together at a nearby table to formulate a plan of escape.

He requests three parts, one part is a battery located just under the tall security tower, (Groot starts heading off toward the part in the background) the guard’s wrist controller and a prisoner’s prosthetic leg then meet at the top of the security tower. Quill questions acquisition of the prosthetic leg as Rocket explains getting the battery should be last because it’ll instantly set off the alarms. Groot has successfully acquired the battery. The Guard in the tower calls for backup and drones are dispersed. This throws the group into different directions, Gamora goes towards a guard for the wrist controller, Quill for the leg and Rocket goes straight to Groot chastising him for the unplanned move. Guards start surfacing everywhere, the small flying armed robots are now shooting at them. Drax observes what’s going on and goes in for the assist, fighting and disarming one of the guards to toss a weapon to Rocket to fight back, while Groot in defence mode using his branches shields Rocket from oncoming harm. All the prisoners have been ordered back to their cells. Gamora achieves her goal with some skill. We get to see the acrobatic prowess of this assassin in achieving her goal. and starts heading back. Quill negotiates with the man for his prosthetic limb and rejoins the group at the base of the tower. Groot extends himself to reaching distance the tower and the group climb up. 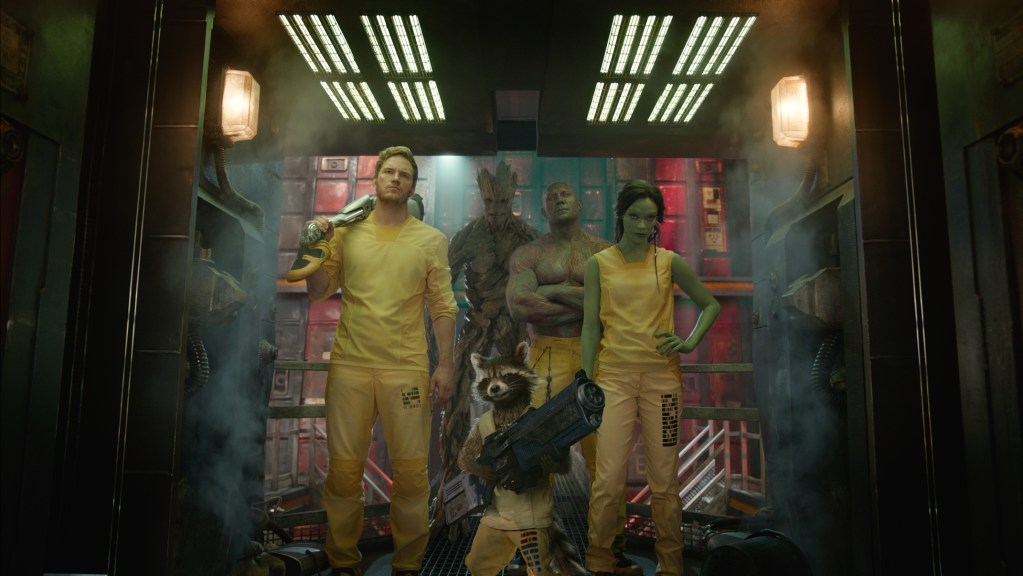 The team arrives together at the entrance to the tower. The sole Guard barely has time to resist before he’s thrown out forcefully by Groot, followed by a willhelm scream. Gamora questions the reason for Drax’s presence. Rocket is already at work on the panel, using two of the three requested components. Quill hands in his contribution, only to realize, the prosthetic request was all a joke. The Nova Corps arrive with heavier artillery, firing rockets from the base of the tower. The glass of the watch tower is thick and low caliber artillery proof but this is different, it wont hold for long. They fire more at the tower. Rocket is frantically pulling wires, crossing wires, interchanging parts, he’s clearly in his element. The guards continue to fire, the tower can’t handle more of this. The glass protecting the tower has finally shown signs of wear, it’s cracking. Only a shot or two remains before the firing guards are successful, all of a sudden they are floating. Gamora acknowledges Rocket has disabled artificial gravity everywhere but inside the tower. A team of armed drones are heading towards the tower, gearing up to fire. Rocket presses a button and now the robots are under his control. The drones are now being used to anchor outside the watchtower, breaking it free of its confines. The tower is now a ship, as is dashes through the corridors. Navigating this makeshift vehicle is rough, as it dashes through, some of the small robots are being knocked about, crushed and released free. Just as it looks like the group is in the clear… Our preview is over and the airing of the latest extended trailer of the film begins. 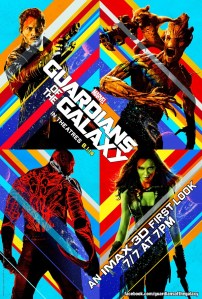 This review is based ONLY on the footage shown, excluding the extended trailer that followed. They nailed Star-Lord. The look, the feel, the humor – so far Chris Pratt is on point. This is the Star-Lord I wanted. Gamora looks great, we got to see a bit of her in action here, not much of anything else. It’s still early to say. Rocket and Groot on the other hand, I’m sold. There’s a lot of emotion Rocket displays and you see and believe every one of them. They looks real, tangible even. When I first heard Bradley Cooper was going to voice Rocket I had my reservations but It’s done right, you forget it’s him. Groot, I’ve always imagined a deep-rooted (pun intended) voice, Vin Diesel is a great fit. Now to Batista’s Drax, he looks like he’s been pulled out of the books and brought to life, upfront and personal to whoop ass. He looks great, the physicality was there. My only problem, I could barely hear or understand him at all. When his character spoke I had to question if I heard anything at all. Okay that’s the character criticisms. The film looks great and it was fun. By the time the film preview was ended I yelled a few four letter expletives in my dismay. The 3D experience was nice, not amazing. Even though is was in IMAX, I’m not still sold on it being a necessary experience on this sequence. Watching the entire film will be a difference case. Marvel was smart to hold this IMAX event. The buzz this will generate will get people to watch it. I’ll give you my Spoiler-Free review when the film comes out in its full completion August 1st.

You can see the extended trailer here