What could be better than seeing my favorite comedian and my favorite artist? How about seeing them both together on the same night! I originally wanted to grab tickets to the Dave Chappelle show with The Roots, Janelle Monáe, and Busta Rhymes but I missed out. Luckily I caught this last minute added show with NaS and grabbed some awesome front row seats.

Now if you haven’t been aware, Dave Chappelle had a highly popular skit comedy show called “Chappelle Show” which ended abruptly in 2005. Since then he has been off the face of the earth basically and pretty quiet. When rumbling that he was doing a comedy show lineup at Radio City Music Hall I know people were wondering if he still had it. 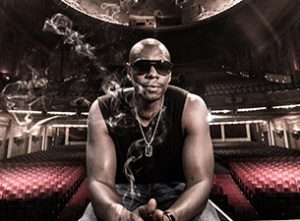 Chappelle opened up the show with heavy applause from the crowd and that place was packed to the brim with seats. Chappelle joked around and said he hope he still had it and went over current events such as elections, the NBA with Donald Stern, the LGBT community and interracial relationships. When he said “Donald Stern is so racist he warned his girlfriend that Magic Johnson was black before he had AIDS” had us bawling. There wasn’t a dry eye in the house with Chappelle and his crazy mindset about things. He always looks to keep it real with the audience and doesn’t try to hold back even with the most embarrassing moments. 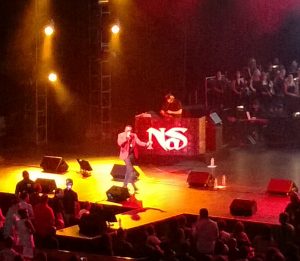 After Chappelle’s show ended we got music from Hip Hop Legend NaS. In a surprise NaS practically performed “Illmatic” from start to finish. Better yet he did it with Dave Chappelle live orchestra band. He later dropped them and went back to his DJ for later albums with tracks such as “Nas is Like”, “If I Ruled the World”, “Street Dreams”, “Nastradamus”, “One Mic”, and the crowd with berserk with “Hate With Me”.

He did give a quick tribute to Michael Jackson before he went into “It Ain’t Hard To Tell” which he used sampling from “Human Nature” by MJ.

I felt for the price of admission I got two full-fledged shows and definitely was worth the money. If I could catch another show this week I definitely would. Dave Chappelle still has it and I would love to see him do some more shows or even return to skit comedy maybe along the lines of HBO or even take a stab at Netflix which has been doing big as of late.