Usually when you think of backup battery packs, rarely do you ever think rugged. I’ve had several of them already and while most of them look good and function well, they weren’t what I would call rugged. A good drop here and there usually meant damage to the body as in a dent here or a dent there. Also none of them were water-resistant. Guess which one is though? The new BRAVEN BRV-BANK is and it’s the first of its kind that is not only rated IPX5 water-resistant and shockproof, but also the world’s first Bluetooth enabled smart rugged backup battery pack.

What makes the BRAVEN BRV-BANK unique is that it can be controlled with the Remote Battery Monitor App. The app allows you to locate the Battery Bank, monitor its power levels, individually turn on and off each port to conserve power, and activate its two additional features: Bear Mode and S.O.S. Not only that, it even includes a USB flashlight that works in conjunction with the app. With a large 6000mAh battery, the BRV-BANK can recharge most smartphones 3-4 times before it needs to be recharged again.

The BRAVEN BRV-BANK is available now for $129.99 which isn’t bad considering what it can do. 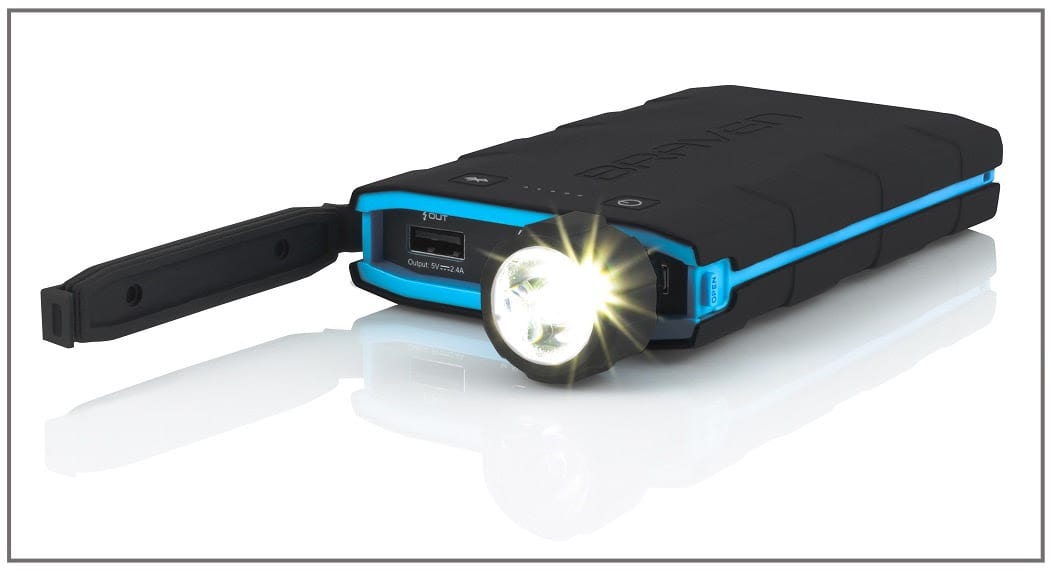 Provo, Utah – June 23, 2014 – BRAVEN announces the immediate availability of the BRV-BANK, the world’s smartest and first Bluetooth® Smart-enabled, rugged portable backup battery with 6,000mAh of power.  The IPX5 water-resistant and shockproof BRV-Bank transforms into the ultimate outdoor companion through its proprietary app and rugged USB flashlight, and quickly charges even the most energy demanding tablets, smartphones, GPS or GoPro cameras with two USB outputs and a combined output of 3.4A.

BRAVEN’s BRV-BANK can be remotely controlled through its Remote Battery Monitor App, which offers users the ability to locate the Battery Bank, monitor its power levels, individually turn on and off each port to conserve power, and activate its two additional features: Bear Mode and S.O.S.  The Bear Mode activates your smartphone’s motion sensor, sending signals to the bank to sound an alarm and activate the connected USB flashlight when your phone is moved. Turning on the S.O.S. mode activates the universal distress signal by sending a visual morse code for “S.O.S.” using the connected USB flashlight.

“The BRV-BANK is designed for outdoor enthusiasts and should be inside every backpack or emergency preparedness kit,” says Andy Fathollahi, Chief Executive.  “It has the power to charge all of your devices and the toughness and features to withstand anything Mother Nature throws at it.”

The BRV-BANK comes with a variety of accessories, including a reinforced lanyard for hanging and easy carrying, a ruggedized microUSB cable for worry-free charging under the harshest conditions, and a convenient USB flashlight.  BRAVEN’s Remote Battery Monitor App can be downloaded on the App Store and on Google Play.

The ideal companion for all outdoor adventures, the 6,000mAh BRV-BANK can fully charge most smartphones three or 4 times and is now available for $129.99.

For more information about the BRV- BANK or the entire line of BRAVEN Bluetooth speakers, visit www.braven.com. Visit our YouTube page to see the BRAVEN speakers in action.