SteelSeries today announced their new Stratus XL, a full sized iOS gaming controller designed to work for iPad, iPhone, and iPod Touch devices. The Stratus XL features a full controller layout similar to that of console based controllers and Bluetooth connectivity. It will function on two standard AA batteries with an estimated battery life of 40 hours. The new Stratus XL will also allow for use of multiple controllers on eth same iOS device at teh same time for multiplayer gaming.

The SteelSeries Stratus XL will be available later this year. Pricing has not yet been set. For more information, check out the official press release below and also visit http://steelseries.com/stratusxl to be notified of its release. 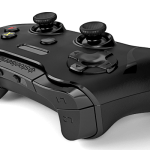 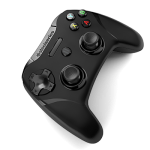 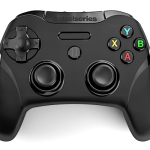 LOS ANGELES (E3 2014) – June 5, 2014 – SteelSeries, a global gaming peripherals leader, today introduced Stratus XL, a full-sized console-style gaming controller designed for iPad®, iPhone®, and iPod touch®. Compatible with a growing roster of controller-enabled games found in the App Store, gamers now have their choice of either a full-sized or pocket-sized wireless controller from SteelSeries for a more immersive gaming experience on their iOS devices.

“We have been working for well over a year now on perfecting the wireless controller experience for iOS devices. We have been incredibly impressed by the way the SteelSeries Stratus has been received by consumers so far and we are looking forward to introducing the Stratus XL to the iOS gaming community – who have been asking for a full-sized controller option,” said Tino Soelberg, SteelSeries CTO.  “The Stratus XL was designed to meet their demands, delivered with the premium features and top-to-bottom quality expected from SteelSeries.”

Similar to the Stratus, the highly-rated wireless iOS controller that launched earlier this year at CES, the new controller features red LED indicator lights found in the middle of the controller that displays the number of controllers or players connected during multi-player gameplay – allowing up to 4 controllers to connect to a single device.

The SteelSeries Stratus XL Wireless Gaming Controller will be available later this year on SteelSeries.com and at other retailers. For more information about the Stratus XL Controller, please visit http://steelseries.com/stratusxl.

SteelSeries is a leading manufacturer of top quality gaming peripherals from headsets, keyboards and mice to controllers, surfaces and software. For more than a decade, SteelSeries has been on the forefront of designing and creating gear for gamers. The company’s continued innovation also comes in collaboration with the world’s leading professional gaming teams and partners. SteelSeries is a global brand that continues to support the growth of competitive gaming tournaments and electronic sports leagues through professional team sponsorships, partnerships and community support. For more information, please visit http://steelseries.com.