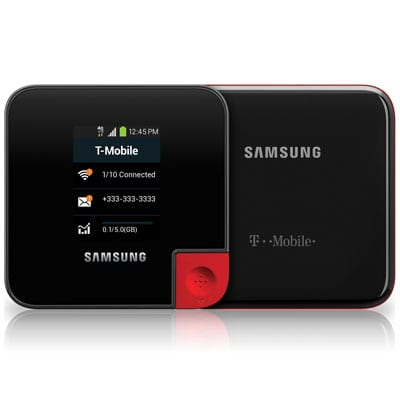 Before heading out to CES this year, I reached out to T-Mobile and wanted to check out their latest hotspot called the Samsung LTE Mobile HotSpot PRO and what better place to test it out then at a tech arena such as CES. Seeing we would be doing alot of coverage and be on the go alot, WIFI hotspots are sometimes far and between and we need that internet connection when we can get it. How well did T-Mobile’s newest mobile hotspot fare out in the land of Las Vegas? Lets find out… 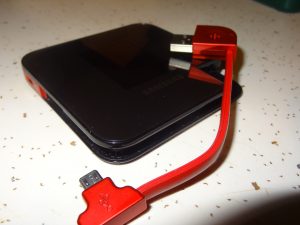 Looking at the HotSpot Pro you will see its a flat square which is less then a inch thick and 3.5in from any angle. Also it actually has some weight on it coming in at over 5 ounces. Otherwise its small enough to throw in say a knack sack or bag but maybe too big to slide into your pockets unlike your usual smartphone devices. On the front is a LCD display which isnt touchscreen which is a bummer actually. We are in a touchscreen world and I have found myself trying to press on it at times. Besides that there is power and WPS buttons on top, MicroUSB charge port on the side and a tab to pull out to use full USB to connect to our PC if need be. Also when pulling out that tab is a spot to put in a microUSB card slot for sharing purposes. Pull open the battery cover hides the 3100mAh(Galaxy Note II) battery and the wireless default codes for utilizing the device.

If you want to use it right out the box you can do so. Just power it up and look for the SSID Network Name and then use the long digit password to start using the internet. It was pretty painless and simple as can be. Now if you want to start doing some advanced options on the Hotspot everything has to be done thru its Web interface which sucks as other devices usually let you make changes right on itself. Another thing I noticed is the data counter never seems to change on the hotspot and I used it faithfully for a week straight.

Testing it out in Las Vegas during CES turned out to be a pleasant experience. I was able to connect right away when needed and used with various devices at a time whether it was my Nexus 5, G2 or a ultrabook. Colleagues of mines also synced their iPhones and Macbooks as well without problems. You are allowed to connected up to 10 devices in total. When you would have a device synced it gave you a counter of how many which was cool. The speeds ranged based on my moving around the area being out there but it was anything low as far as a couple of MB/s to highs of close to 20+. Most of the time of use out there I stayed in the teens which was awesome in itself. Battery life was pleasant while maintaining alot of use out there and I may of charged a few times out there but it held up well. Having it across the room and being away from it didnt really show any type of loss of signals either.

Take It On the Go?

Pricing for the Samsung LTE Mobile HotSpot Pro on T-Mobile has it either at $0 down and paying $7/24mths or flat out paying the retail price of $168 and not worrying about any other monthly billing but your data services. These data bucket plans range from 500MB up to 10.5GB which can run you $20-70 depending on your appetite for data. If you really need higher speeds a call to T-Mobile to get you much more.

I guess my own gripes about the device was the LCD not being touchscreen and having to make changes all via the web interface. With hotspots you want to be able to make changes on the fly and not have to go thru some painful tasks to get the job done. Other then that, I was pleased with the Samsung LTE Mobile HotSpot Pro and think its worth having if you are a T-Mobile subscriber and needs some broadband internet on the go.