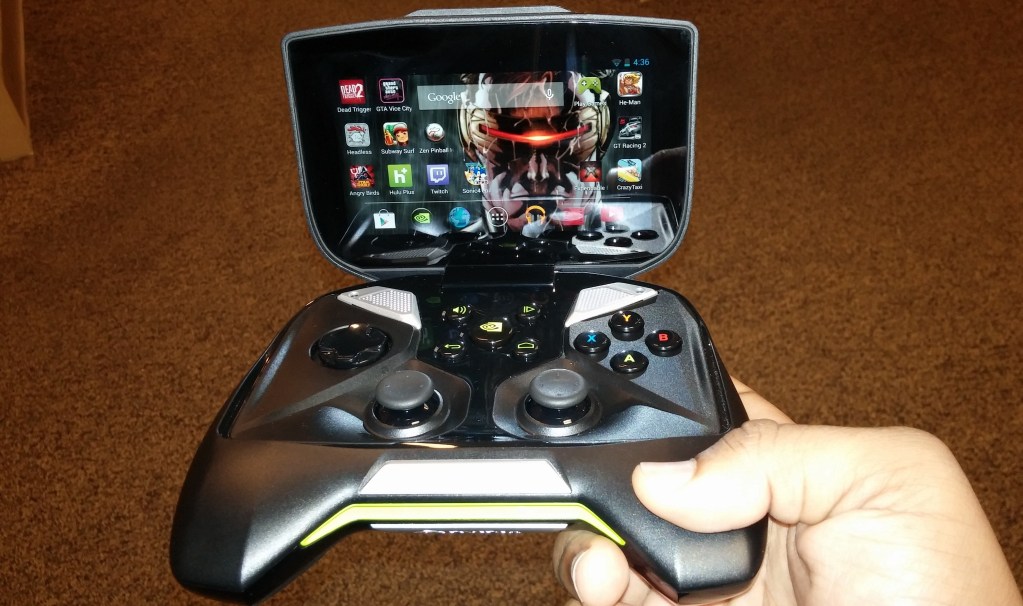 The Shield from NVIDIA is its first attempt into getting into handheld game consoles as they have typically been known for making some of the highest end graphic cards in the biz. It was first showcased at CES 2013 with a couple of other mobile gaming devices to be the “must have” portable gaming device for your PC and Android gaming needs. Finally released and available to the public the NVIDIA Shield has so many bells and whistles but does it justify its price tag of $249?

Believe or not, mobile gaming has become such a huge market it puts other companies such as Nintendo with their DS series and Sony with its PS Vita on notice as far as mobile gaming is concerned. Nothing is easier then downloading a game to your mobile and carrying it with you on the go. When you’re done with it you can swtch back to your other tasks.
The NVIDIA Shield is a powerhouse as far as specs are concerned. It houses a quad core processor, 16 GBs of memory(with expendable memory to 64GB via microSD), 2GB RAM, a Tegra 4 graphics chip and has a 5” IPS LCD Display. Besides that it has ports of HDMI, a cooling fan and microUSB port. Alongside that it runs Android 4.3 and gives you full access to its Google Play Store, giving the ability to do more than just game. At its late update it had better software then some of the flagship smartphones on the market today.

2. It’s Like a Big Console Controller
If you are used to doing a lot of console gaming, then the NVIDIA Shield should have you right at home. Its button layout is similar to the XBOX with four buttons on the front, two shoulder buttons, and two trigger buttons on the back. The analog buttons and D-Pad setup is reminiscent of the Dual Shock controller we have grown to love (or hate). Near the top is two speakers providing you with stereo sound and there are buttons dedicated to android usage such as a back and home button as well.

3. The Support is There
One of the fears for adopting new technology is whether not a company is going to back it fully. These are sometimes based on sales or even the compassion that overall company gives to see its product strive. Since I had the Shield I have seen NVIDIA give it update after update to keep it on par and make it worth your money. Updates have varied from getting Android 4.3 to the much needed GamePad Mapping feature. GamePad Mapping basically allows you to setup our own button layout on an android game even if the Shield hasn’t been configured for it. Other features included Console Mode-allowing you to connect your Shield to a HDTV, and GameStream- if your PC is running the necessary NVIDIA hardware you can stream its content to your Shield to play games such as Batman Arkham Origins, Assassin Creed IV: Black Flag and other games. If you happen to live near Northern California, you can partake in their GRID program which streams gaming directly to your device. If they only had that in NYC..

Reasons Maybe Not to Get:

1. Heavier then Most
Even though it is “portable” it’s heavier than other devices coming to over a pound. Its not for pulling it in and out your pocket but more for a bookbag or small knapsack. So it is a bulkier then most but the weight does bring sturdiness to it. But this once again all depends on our portable taste.

2. Pricing
When the NVIDIA Shield first hit the shelves it was priced at $299.99. While the specs on it are high, it put it in console price territory with home systems such as the PS3/X360 offering similar or lower prices. Also being that’s its portable, for $100 left you can easily grab a Nintendo DSed or Sony PS Vita handheld. Luckily they had been advertising lower pricing on it with numbers floating around $199-$249(where it currently sits).

3. Need a High End Graphics Card
To use the NVIDIA Shield with your PC you need a high end graphics card such as their GeForce GTX 650 which starts at $100+ and up. So even if you get that graphics card make sure your PC as support it and the rest of the rig isn’t outdated or efforts will be pointless.

The NVIDIA Shield is Android gaming powerhouse that shouldn’t be slept on and looks to keep getting more impressive once again as long as NVIDIA keeps supporting it. If any case that does fall apart, it looks like the user communities have its own type of supporting from rooting to ROMs to keep it chugging along for a long time.

If you want something with the power of the Shield but more of the tablet route you can also check out the Tegra Note 7 for $199.99.