If you read some of my hardware reviews in the past, you know that I’ve been pretty impressed with ROCCAT’s line of gaming accessories, mainly their gaming keyboards and mice. What you may not know is that ROCCAT recently released their new ROCCAT Power Grid app as an open beta for all to try out. This is an app that will work on any Windows powered machine and can function without the need for any ROCCAT accessories at all. This is strictly a software solution to get the most out of your current hardware, using nothing but your mobile phone. For starters, head on over to ROCCAT’s official website here and download the host software to your Windows machine along with the app for either iOS or Android. For this review, I’ll mainly be looking at the iOS version, though both apps are pretty much exactly the same. 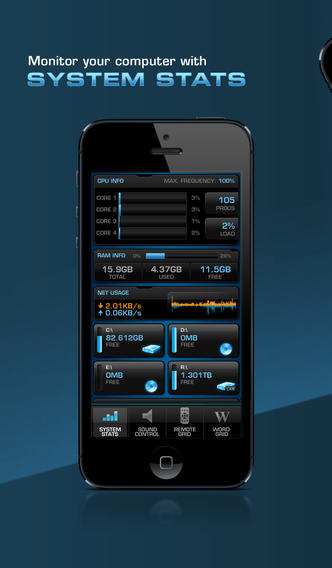 The ROCCAT Power Grid app is meant to be a companion app for your PC. Out of the box, it has the ability to display detailed system stats, sound controls, function as a message center, as well as a shortcut display for many Windows 7 features. Again, you’ll need to install both parts to make use of this – the host app and the mobile app. You’ll need to launch the host app first, find your IP address, and then connect to that address via the mobile Power-Grid app. Once connected, you’ll be able to control a ton of Windows features remotely from your mobile phone.

My favorite is being able to look at the system stats. You’ll be able to get a quick glance at vital information concerning your hardware. This is useful for gamers who need to tweak or watch their CPU and memory usage. The sound settings are also pretty useful and allow you to tweak volume on your machine on the fly. If you look through the settings, there’s even a really useful app for those who use laptops or non-full sized keyboards. You can set up your mobile phone to be a number pad, which I think is pretty neat.

The most useful tab though on the Power-Grid Launcher host app is the Editor. The Editor allows you to make your own custom grids and controls in which you can literally create a grid that does anything you want. You do need to play around with the editor a bit to see what does what and how to edit those parameters. It’s really powerful, but takes a lot of looking around and experimenting.

If you have ROCCAT products that are ROCCAT Talk enabled, you’ll be able to use the Power-Grid to control certain aspects of those accessories, mainly being able to change Talk FX settings and changing the backlit colors of those devices on the fly. There’s probably more it can do besides that, but I haven’t dug deep enough to see what else it can do.

Because the app is in beta essentially, there are some bugs that pop up every now and then. For starters, some of the grids don’t always appear correctly or load at all. Other times, they just won’t control what they are intended to, but this is rare. Despite these issues, the ROCCAT Power Grid really is an app that most Windows power users should download. It has a ton of potential if you’re willing to dig deep into it and is a great way to have any shortcuts right in the palm of your hands.

The ROCCAT Power-Grid is one of the neatest and most interesting PC control apps I have ever seen. What’s amazing to me is that ROCCAT is providing this for free right now during the beta phase. There is so much you can do with this app, I can’t believe they aren’t charging for it. Even if you don’t create your own grids, you’ll get a lot out of it, but of course the best functionality comes from those who really explore the app.