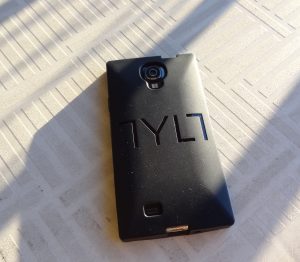 Tylt as you may of seen have their hands in everything in the mobile accessories market. Whether its Bluetooth speakers or car chargers they want to be everywhere your smartphone is no matter the situation. The main thing that caught my eye from them at CES was actually their phone cases and the design variations that each one brought with it.

Tylt’s name is embossed across the back of the case in big letters. It’s not too noticeable until it’s in your hand and you feel the etching. The case is made of a solid TPU that is also pretty flexible and bendable. SQRD brings some depth to your S4 with its raised casing about the screen and solid enhanced corners. Always good as when phones usually drop they go corner first. It’s rare to see them go face flat but hey it does happen. There are cutouts for your USB cable, camera and headphone jack around the phone while the buttons are covered in TPU like most of the device. 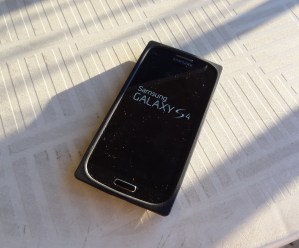 It’s fairly slim and has no problem sliding in and out of my pocket. There isn’t much bulk to it and I like the simplicity of the SQRD. Putting it on is as easy as just putting the phone inside the case and getting it off is just with you pulling it off. I have dropped it a couple of times and the case has absorbed the shock with no problem. Now I have dropped it on its corner and not face down.

One thing with the case I’m not a fan of is the TPU on the buttons. I feel like I have to press down pretty hard on them to get a reaction at times. It could be just me being used to easier button presses on other cases and the phone itself.

Tylt put together a great structured case built for the minimalist that doesn’t want their phones to be flashy but stand out just a tad bit. Adding a nice grip and little weight to the Samsung Galaxy S4 maybe something you’re attracted to. There are a variety of colors available besides the color I reviewed which was black such as Red,Pink, and Blue.
If you’re interested In picking up the SQRD by Tylt its $29.99 HERE

Jason Millionhttp://www.jmillionnyc.com
Jason Million is Deputy Editor In Chief. Jason currently uses a OnePlus 8 Pro with T-Mobile among other gadgets. Hailing from the streets of NYC, always trying to have a blast or catch a bite to eat. Enjoying technology to the fullest. Any other questions hit him up.

Okay, all is said and done, Google has dropped it's line up for 2020. First was the Google Pixel 4a which has...
Read more