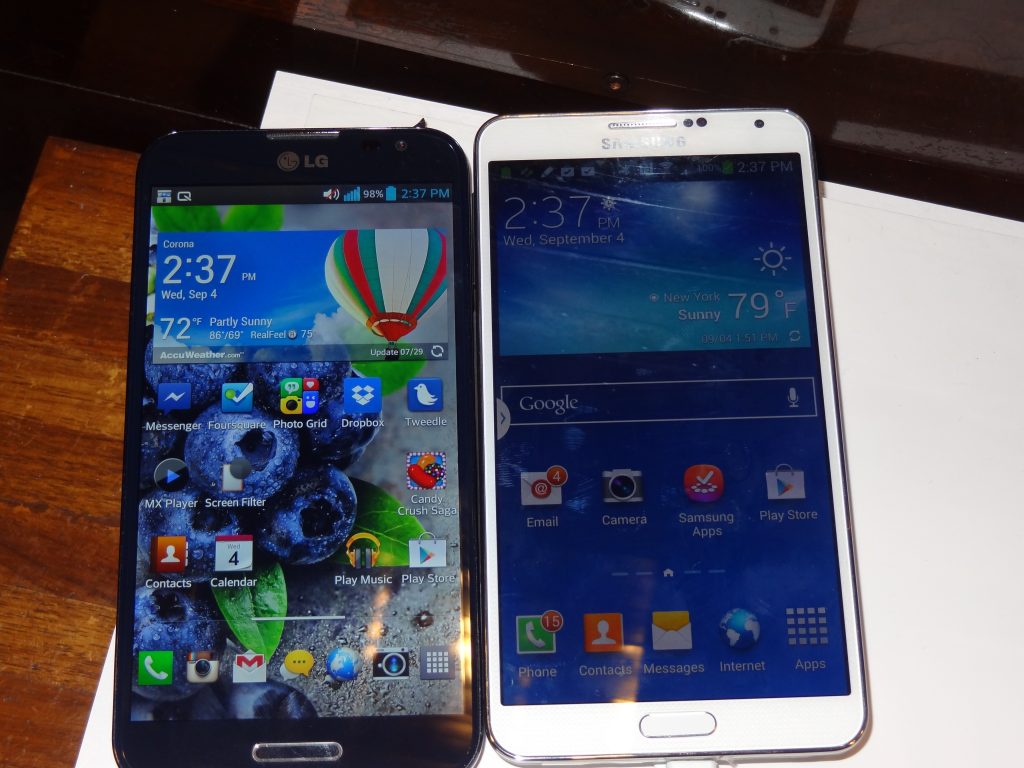 Who knew there would come a time where we would be comparing huge display phones and at such an accelerated rate? Once known as a niche category, phablets seem to be taking over the forefront and you are starting to see them in the hands of the consumers more and more. People are screaming for more screen real estate and with phones such the LG Optimus Pro and the Galaxy Note series it is feeding that appetite. Now here we are looking at how the LG Optimus Pro has been doing and if it can hold up against its newest adversary in the arena such as the Note 3.

Now I been a big fan of the Note series since the 1st one released but I never got my hands dirty until the Samsung Galaxy Note 2 came out. I used it to replace one of my HTC phones and never looked back. Features such a bigger screen, crazy long battery life, multitasking and that lovely S-Pen were things I couldn’t do without. As time progresses we had newer phones such as the Samsung Galaxy S4 come out with expanded features and technology leaving the Note 2 outdated specs wise but still great as far with its size. The LG Optimus Pro came about and tried to dethrone the Phablet King.

So here I’m going to do comparisons with the Galaxy Note 3 up against the Optimus G Pro and if LG can still box with Samsung.

The Optimus G Pro is using the Snapdragon 600 chip with a quad-core CPU while the Note 3 is using the Snapdragon 800 chip running alongside octo-core. This doesn’t make the G Pro a slouch by any means though. Navigating through the various apps and browsing they seem to work similar. The Note 3 is using 3GB RAM to take on the extreme multitasking you’re bound to put the phone through however. 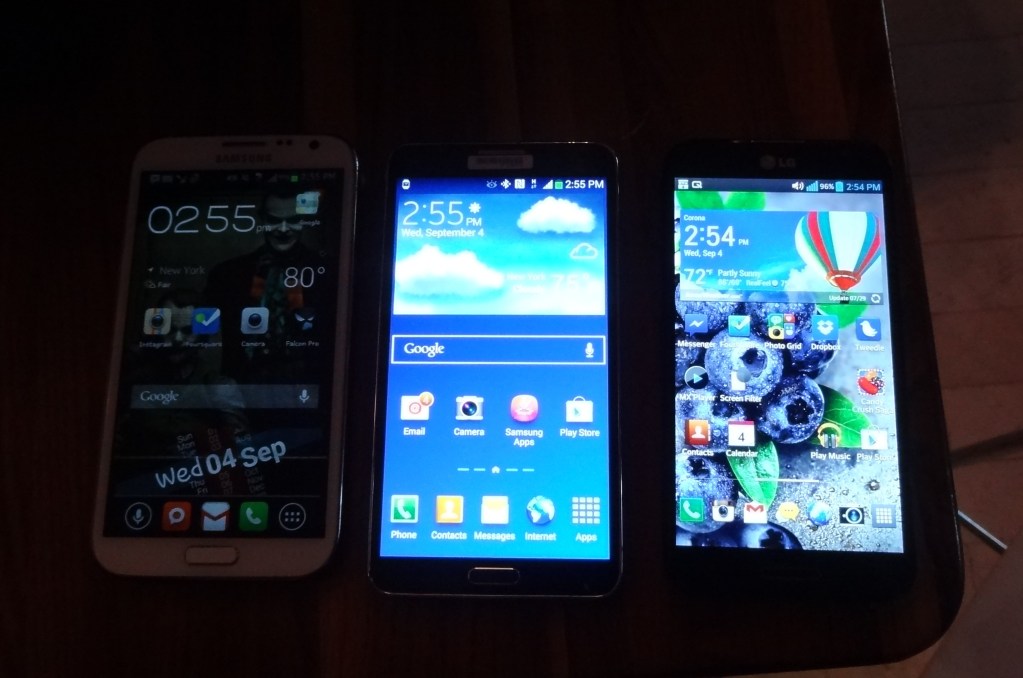 Screens all depend on your preference of if you like IPS or AMOLED. IPS is being used on the Optimus G Pro’s 5.5-inch 1080p screen while the Note 3 is using Super AMOLED on its 5.7-inch 1080p front. AMOLED is known for deeper blacks while IPS is great for better colors and brightness. Matching them side to side they both look gorgeous compared to the older 720p display on my Note 2. So at this point it’s a tie matching screen resolution.

Both using 13MP cameras on the back and 2MP on the front the cameras are both similar. Samsung has been known for adding ton of features to their suite of picture-taking seen in the release of the Galaxy S4. If you just want to take pictures then the G Pro is fine, if you’re looking for tweaks left and right out the box then the Note is more up your alley. 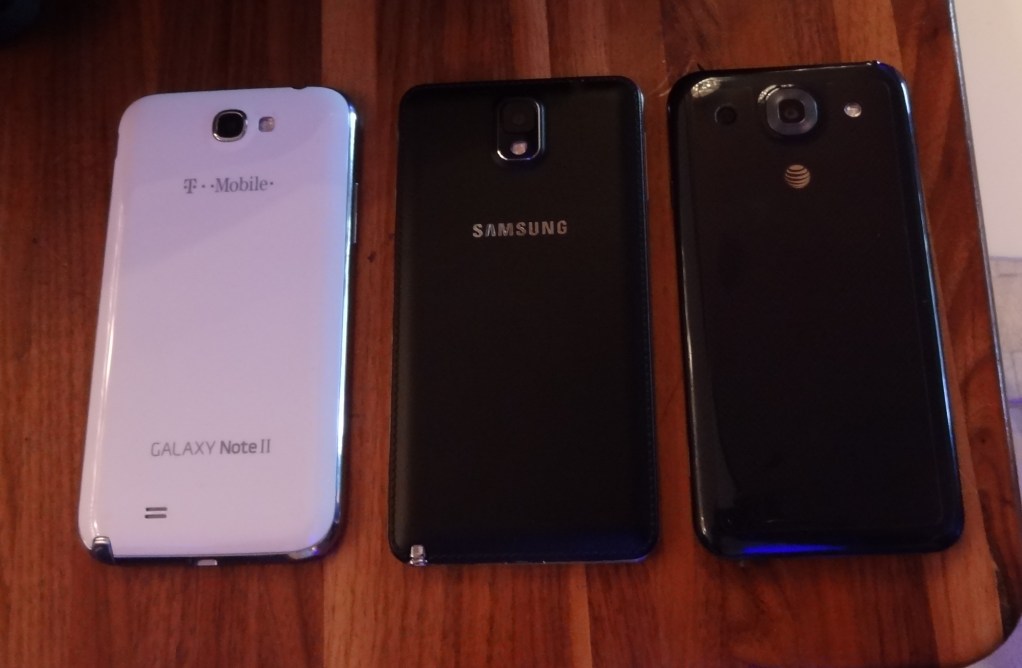 We know phablets are heavier than your usual smartphone of course, but these companies have tried to minimize the weight as much as possible. The Note 3 & G Pro are around the same weight class making the Note 2 feel like a rock. The capacitive buttons are reverse of the Note series and can be confusing if you’re going back between devices (which you’re not most likely). A couple of nods I will give to the G Pro is the Home button doubles as a LED notification and I love to see it light up in different colors. On the side is a button called QuickButton. Need to send out that new tweet ASAP, or check your Instagram for likes set it up. I have mines set as Instagram as I’m addicted to that app (don’t judge me). The Note 3 has removed the polycarbonate plastic we knew and loved and added faux leather. It does provide a better grip rather when using plastic so it gets kudos for that. How it will hold up in the long run remains to be seen. Also making the Note 3 stylus symmetrical and more of a necessity is great to see.

The LG Optimus G Pro is an impressive phablet or rather smartphone and could be one of the best on the market. One of the things I think holding it down is only being tied down exclusivity to one carrier AT&T. AT&T is a great network when trying to get service in the big city such as New York City and their 4G LTE is incredible with its broadband like speeds.

The Samsung Galaxy Note 3 although hasn’t been released yet looks to be a beast on the market and one of the most powerful devices out and hard to trump. If you’re not looking for using the almighty S-Pen and looking for a great powerful priced phablet on AT&T reach out and get the LG Optimus G Pro for $99. If you want something a bit more updated you can wait a couple more weeks for the Note 3 which will also be on AT&T and various other carriers.