V-Moda, is said to have originated the idea of fashion headphones back in 2004. “HearWear” is such a common staple today it’s hard to remember a time when the market wasn’t flooded with fashionable headphones. They’ve taken that same mantra and created the Metallo Case metal designer protection for both iPhone 5 and Samsung Galaxy S 3. The Metallo Case doubles as a dock to be used with V-Moda’s Vamp Verza to transform your phone into an integrated mobile hi-fi system and extended battery pack, as well as a standalone case. For the purpose of this review it was only used in the capacity of a standalone iPhone 5 case. Is it worth it’s $101 price tag ? Let’s see:

The first thing you notice about the Metallo Case is that it is all metal, as the name suggests. The Metallo was designed in Italy and has a patent pending V-Angle design which some can say is an octagon like shape. It makes it almost impossible to tell that you have an iPhone – considering the number of iPhone thefts that’s not exactly a bad thing 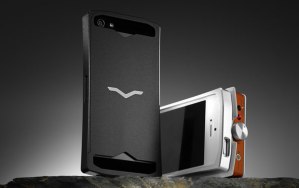 . Like the Crossfade M-100, the Metallo case can also stand upright for added versatility.

Metallo is available in Black Mamba, Silver Snake and Red Coral. The review unit I received is Silver Snake which looks pretty dope against my white iPhone especially when placed next to my MacBook Pro. The coolest thing about the design of the METALLO case is that each case is made from a single metal block, which is precisely machine milled and laser-cut with a state-of-the-art process that takes nearly 60 minutes per unit. Putting the case on and off the iPhone requires you to slide the back plate, when being removed the metal back plate sounds like unsheathing a sword and when being on it sounds like locking and loading a gun.

I won’t confirm or deny that I sat and excessively slide the back plate back and forth and played super spy ninja in my bedroom – but I did find myself pretty fascinated by the sound.

Included with the package with your Metallo Case frame you will find Protection Film, Back Plate, VERZADOCK Back Plate, Allen wrench, metal guitar pick, and a 1 year premier warranty. Even with the odd shaped case your iPhone still feels good in your hands. Since it’s so slim and lightweight it doesn’t feel like ay bulk has been added to the phone. The metal on the case plays nicely off of the material of the iPhone.

I know the sound of a metal case on your iPhone sounds like scratch heaven, but the inner foam and clear film included with the Metallo protects your phone from scratches. After several hundred slides of the back plate my phone still has like 0 scratches.

The alternate VERZADOCK Back Plate is ideal for people that own the V-Moda Vamp Verza, however I didn’t review the Vamp Verza and can’t speak to much to that. Below is a video taken from the V-Moda site showing the Metallo with the Vamp:

So whether or not the V-Moda Metallo is worth the $101 price tag is entirely up to you. If you have the extra money to spend than by all means go for it. If you’re an iPhone 5 or Samsung Galaxy S III owner that also owns a V-Moda Vamp Verza owner then DEFINITELY go for it.