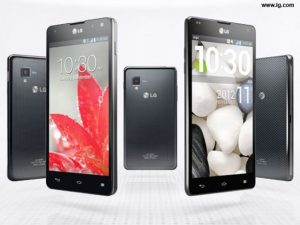 Let me start by saying that I am a LG Optimus G owner who believes this is one of the best mobile phones out. Too bad it doesn’t get the shine the other devices such as the HTC One and the iPhone 5.

With that being said the LG Optimus G Pro 4G LTE is the LG Optimus G on steroids. If you are a Samsung Galaxy Note II lover (Yea, Yea who doesn’t compare these two so don’t judge me lol), the LG Optimus G Pro might have you considering cheating and reneging on all those vows you took at the altar lol. Everybody’s not into “Phablet” phones, something about a phone being 5″ and up is not appealing to some consumers. Surprisingly this 5.5″ phone is lightweight, fits comfortably in your pocket, not too bulky and feels good in hand. You can try the front pocket, back pocket or for the ladies slip it into their purse. A tad bit lighter than the Samsung Galaxy Note II and doesn’t feel like if I dropped it that it would crack into pieces.

If you look just below the screen there’s the Home button which illuminates with a variety of colors when you turn it on or off. The back button is located just left of the Home button and just to the right is Menu button is sitting there staring at you lol. The LG logo is at the top along with the 2.1 megapixel camera and the proximity sensor. The back cover of the Optimus G Pro has a textured pattern with a glossy finish that surrounds the device. Like most devices fingerprints will appear but they easily wipe away. With the LED flash along with a speaker there is the rear-facing 13 megapixel camera and “ta-da” the AT&T logo appears. The QuickButton provides easy access to your phones application and the QuickMemo is the default application. The Optimus G Pro has a 3.5mm headset jack which is the first microphone and the second microphone along with the microUSB charger/accessory port located on the bottom of the device. 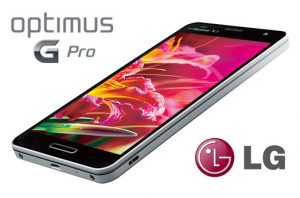 LG also assists with home entertainment access in attempts to up its game versus its competitors. The QuickRemote via built-in Infrared sensor to control cable provider, compatible TVs and Blu-Ray players among other things. To configure QuickRemote, add device, select a room, select your device’s manufacturer and press a couple of on-screen buttons to help the phone decide which signal to send to your device. If you end up using this app often it will automatically pop up by swiping the lock screen or notification panel. The set-up is pretty easy.

Slide to the Left 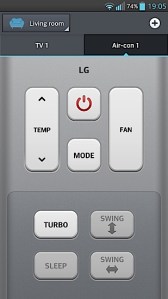 Now “Cha Cha yall and sliiiiide to the right” with the Qslide which allows you to view three applications at the “Same damn time.” The QSlide application includes Calendar, Videos, Calculator and Note Pad. You can watch a video while taking notes in the Note Pad or while using another application or just surfing the internet. You can resize QSlide apps and change the clarity of the app on your phone. I was thoroughly impressed by this feature. I’ve always believed LG is one of the most slept on mobile phone manufacturers in the game, but I think the world may finally notice that LG is a contender. Also included with this fabulous phablet is the QuickMemo feature that allows you to write on any screen, share images you’ve created, create memos and capture screen shots. One thing I do need to mention is unlike the Samsung Galaxy Note II the LG Optimus G Pro is without a stylus. So if you’re used to using a stylus it may take some getting used to. QuickMemo is easy to get access to by dragging your finger from the top of the screen or just simply hitting the QuickButton on the left edge of the phone You can easily access QuickMemo by dragging your finger down from the top of the screen or by pressing the QuickButton on the left edge of the phone. All in all this is a great phone and I even recommend this that consumer who doesn’t like the 5″ inch screen or phablet for that matter.

As per the battery it’s equipped with a 3,140 mAh user replaceable battery. AT&T claims 15 hours and 30 minutes of talk time or up to 24 days of standby time. When I tested the battery I kept the brightness 100% because I like “Bright Lights, In the Big City” and want to get the full texture the 1080p but that’s just me. On a full battery I was using apps, watching Netflix, Twitter, Facebook chat, Vevo, games and YouTube and I was already impressed with the graphics of my 4.7″ LG Optimus G so to see that on a 5.5″ screen was ridiculous. I kept on 5 min inactivity time out but I was often using because I was enamored by the screen size. So when I finally decided to go to sleep in standby mode from about 12:30 am to 7:45 am the battery life only went down to 70% and I didn’t have to charge until after a full day at about 9:30 pm so I give the battery life a major thumbs up especially because of the size of the phone. Trust me LG Optimus G Pro will change your life and once you have it you’re going to ask yourself, “Now why didn’t I want to deal with an enormous phone?” Don’t believe me? Check the video after the Specs and I’m sure you’ll be ready to cop it. It’s available from AT&T for $99.99 with contract and discounts – which is the only downside for me since AT&T isn’t my personal carrier.