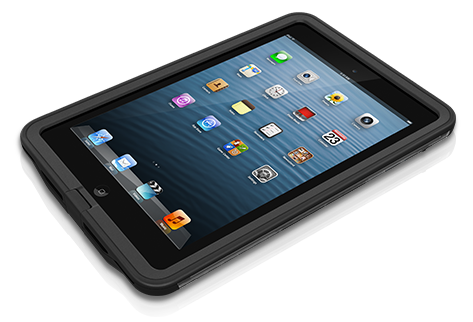 In the large world of iPad mini cases, there is a very small number that are specifically made to be waterproof. In fact, you could probably count them all on one hand. I’m here however to mention just one and it comes from a company that is almost synonymous now with these type of cases, Lifeproof. Lifeproof of course made their name originally making iPhone cases. They were one of the first on the market with a completely waterproof case in which you could submerge your iPhone in water for a short amount of time, protecting it from accidental water damage as well as from other elements. Well they’ve expanded their lineup and now include cases for much larger devices like tablets.They recently sent me their new Lifeprood Fre case for the iPad mini so I’ll be taking a look at that here today seeing how well it protects your device from the elements.

The Fre is the newest case from Lifeproof for the iPad Mini. It shares much in common with its smaller brethren, just in a much larger size and with a few improvements. To start with, lets dispense with all the specs and get that out of the way. 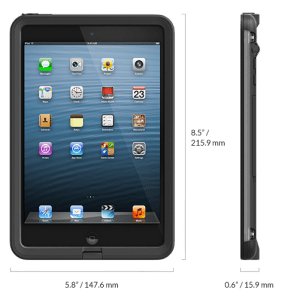 What this basically means is that this makes for one very tough case. Not only is it waterproof, it is also dirt proof, snow proof, and shock proof. Basically when you have the Lifeproof Fre, your iPad mini is virtually fully protected from the elements. It will even withstand a 4-foot drop.

The entirety of the Lifeproof Fre is made of very strong plastic. The bottom half of the case has a rubberized layer on it for massive amounts of grip and also helps with shock protection. This surrounds the outside border of the bottom half and frames a clear plastic window in which you can see the back of the iPad mini allowing the Apple logo and small type at the bottom to show through. Since this is a complete sealed case, the rear also has built in buttons for he volume as well as its own built in mute switch toggle. The lens hole even has its own CrystalClear optical-glass lens to ensure distortion-free photography.

The top half of the case also made of plastic but only the outside border is layered in rubber. The bevel that goes around the screen portion is just smooth plastic. This top portion houses waterproof speaker ports that keep water out but allows sound to pass through. Same goes for the mic hole up top. There is a plug for the audio jack that you can undo to allow use for a headset, though you will need to plug it back up if you want the case to be waterproof again. Of course the main part of the front that allows the Lifeproof Fre to be fully protected from the elements is the almost invisible screen cover. This is built into the case and protects your screen from damage. It is thin enough to allow for normal screen use but tough enough to protect it from everything else. 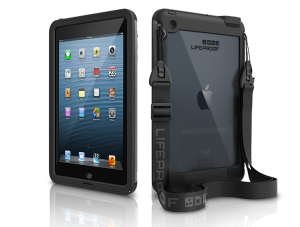 Both halves snap together and are kept water tight with a rubber seal on the inside grooves. It does take quite a bit of effort to get both halves together but this does give you a sense that once it’s on, it will protect you from everything. What if you want to charge your device? Don’t worry, the case design has that covered too. There is a little door at the bottom that you can pop open and allows for normal charging. This door has a water proof seal on it so remember to close this again before using it near water or anything else.

I forgot to mention that the rear half of the case actually has these little leash eyelets at all four corners. This allows you to use the included shoulder strap for easier carrying of your iPad. It’s also easy to remove the strap if you don’t want to use it.

I’ve been using the Lifeproof Fre for a good solid week now and there is already much to like about it. For starters, it’s actually pretty thin and not that bulky at all. Yes there are portions of it that are a bit thicker that you might want them to be, but overall it’s a pretty slim case and it’s understandable why it is thicker in some places. I will say that having the case on does make the iPad mini much easier to hold and not as slippery thanks to the rubber coating and slightly thicker profile. 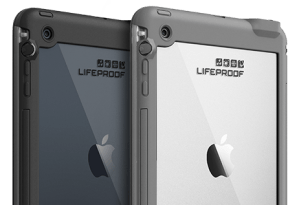 When it comes to touch, I did not notice any noticeable delay in using the touch screen with the Lifeproof case on. In fact, it felt just as responsive as it did without the case on. It doesn’t hinder any of its functions and even typing worked as well as it did before having the case on. Even the home button works as it should through the protective screen.

Now, one of the main issues you’d expect to have with a fully enclosed case is not being able to listen to any audio clearly or being able to use the mic correctly. Well, I can tell you that you have nothing to worry about with that. I had a full online video chat with someone the other night on Google Hangouts and I was able to hear them clearly through the case and they were able to hear me. That means that even with the case on, you’re able to use the iPad mini as normally as you would usually use it. Even while playing games or playing videos, I could still hear everything load and fairly clear. If you need it to be better, I suggest using a Bluetooth speaker and bypassing the devices speakers altogether.

I did not try to submerge the Lifeproof Fre completely underwater. I did do it without a device inside, which they recommend that you do, but with the device installed, I’m still quite afraid to submerge it and that’s not something I would do with my iPad mini anyways. Instead, I did use it at the pool where it did get splashed on and I even took it to test in my shower. It passed those tests easily with my iPad mini staying nice and dry. Not only that, with it inside the Lifeproof Fre, my device stays nice and clean and I don’t have to keep constantly wiping down the screen.

I never really thought I’d use anything other than a folio style case with my iPad mini up until now. The Lifeproof Fre is the first real case I’ve used and kept on for a whole week that didn’t have a cover on it. For some reason, because of the added protection of the front screen protector, I didn’t feel like I needed a cover anymore. Also the case itself is far more protective than any folio style case ever was not to mention the fact that it completely protects my iPad mini from the elements of the outside world. It’s a terrific case for everything that it can do with very few negatives about it at all.

If you do want a cover for it however, fret not as it looks like Lifeproof may be coming out with some add-on accessories for the Fre and a smart cover like accessory looks to be among one of them. Until then, the Lifeproof Fre  itself will set you back about $100 but in my opinion, it’s well worth it for the type of protection it provides.