As I’ve said in previous review for Samsung Galaxy S4 cases, this is far from the last case you will see for this very popular mobile phone. In fact, I’ve only scratched the surface of what is available for it. Most cases end up being the same as others with some tiny variations but for this review, I’m looking at something completely different than anything I’ve looked at in the past. This is the Seidio SURFACE case. What makes this different however is that this case include a built in metal kickstand as well as an included SURFACE Holster. Yes, this is the SURFACE case + Holster combo package. 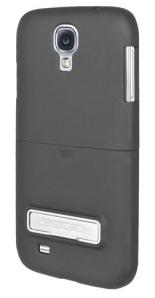 For starters, yes you can buy these parts separately from Seidio, but they sent me the entire combo package so that’s what I’m looking at here. I’ll start with the SURFACE case itself first. There are actually two versions of the SURFACE case, one with a metal kickstand and one without. The one I have here has the metal kickstand. The SURFACE is a two piece polycarbonate plastic case with a slide in design. That means that the case is split in the middle and you slide the Galaxy S4 into one half and then slide on the other half to complete installation. Like most Seidio cases, this one too has a soft touch coating that give the case a bit of extra grip as well as a smooth feeling. Something we don’t see often though that the SURFACE case has is a felt lined interior that luxuriously cradles the Galaxy S4. They do this I’m assuming to keep the plastic case from scratching up the S4’s rear cover. It also probably provides some sort of cushioning. The other unique thing about the SURFACE case is the metal kickstand on the back. Since the Galaxy S4 has such a huge screen, it’s perfect for watching movies so why not have a case with a built in kickstand so you can prop it up to watch your flicks. What’s neat is that the kickstand is magnetized so when not in use, it stays closed.

As with most cases, the SURFACE has all the necessary cutouts for all ports, speakers, mics, buttons, and IR blaster. This case doesn’t cover the power button or volume rocker like other cases do. I will say that the SURFACE is a very slim case which helps keep the overall dimensions of the Galaxy S4 the same.

Overall, the Seidio SURFACE case with metal kickstand and the holster is a fantastic, versatile package. Not only does it protect, it’s functional thanks to the kickstand and the holster is just a bonus that allows you to keep your pockets free for other uses. For the fashion conscious, you can pick up the Seidio SURFACE in several different colors – Black, Glossed White, Garnet Red, Fuchsia, Amethyst, and Royal Blue. You’d expect a combo like this to be quite expensive but it’s actually very affordable and a quick search for at Amazon sees it for under $50.