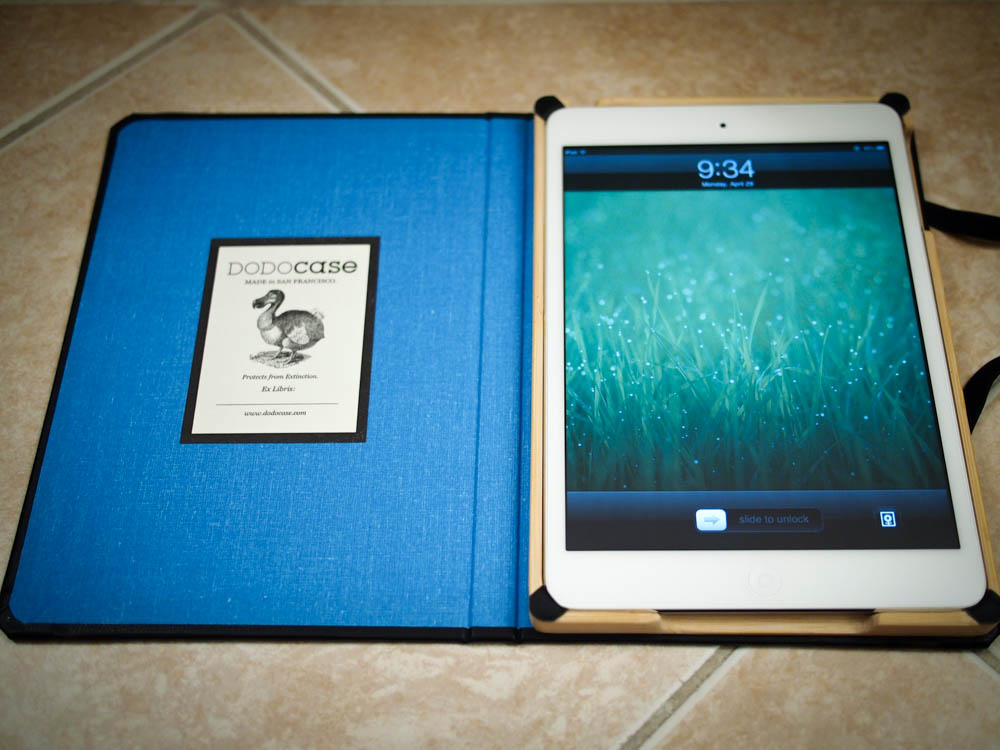 Back in 2011, the first case I ever had for my newly purchased iPad 2 was the DODOcase. It was shipped to me the very same day that Apple released their iPad 2 and I remember showing it around to people who had waited in line with me. They all thought it looked really good and it had that premium feel to it thanks in part to its bamboo frame. Since then, I’ve gone through tons of other cases from other manufacturers and never really went back to using my DODOcase. With the iPad Mini, I’ve gone through a ton of cases as well, each with their own pros and cons. I have never quite found the absolute perfect case because as close as one might be, there is always one little thing about them that might bug me. With that said, I decided to give DODOcase a try again with the iPad Mini. I’ve always loved the way their cases looked and maybe, just maybe, the DODOcase might be much better on the smaller iPad Mini.

What sets the DODOcase apart from other cases I’ve used so far it that it uses a solid core bamboo tray that holds the iPad Mini in place. It is light, strong, and imperfect. I say imperfect because when you look at the tray, you can see areas where the bamboo isn’t quite even or where there are little natural dents in the wood. This however is not a bad thing at all because to me, these add to the charm of the DODOcase and the fact that no two DODOcases are really the same. 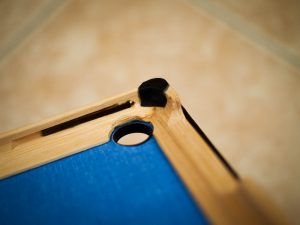 The bamboo tray cradles your iPad Mini perfectly and it held in tight with these leather-like pieces at each corner of the tray. For some reason, this setup for the iPad Mini works way better than my original iPad 2 case in which my iPad 2 would sometimes fall out of the tray because it wasn’t being held in tight enough. On the iPad Mini however, it is very tight. I can literally shake the heck out of it and it will not fall out at all. It is very much improved from the one I had before. The bamboo tray also features cutouts at the bottom for the charging port and speakers while the right side features a cutout for the volume buttons and mute switch. The top only feature a cutout for the audio jack and not the sleep/wake button. DODOcase instead opted to include it’s own laser cut bamboo power button which is awesome. This makes it so much easier to press the button while also adding a bit of protection as well.  The volume buttons and mute switch however are a little harder to get at as they sit recessed in the case. It’s not impossible but it does require a bit of effort. 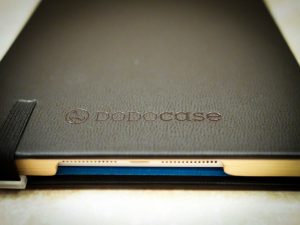 Now one of the main reasons you buy a DODOcase is because it looks like a hardbound sketchbook. This was one of the things that drew me to the DODOcase as I’m the type that doesn’t like to show off the fact that I’m carrying around an iPad. I like my iPad disguised to keep thieving eyes off of it but I also want something very functional and protective. The hardbound cover means that it is very protective against bumps and scratches and doesn’t feel flimsy like other covers.

Each hardcover is made from black Moroccan cloth and constructed using traditional bookbinding techniques. It has a unique texture to it but still feels very smooth to the touch and while offering a good amount of grip. The inside of the cover is lined with some kind of colored cloth that you can get in either red, blue, or charcoal. The one I received was blue and I really love how it adds a splash of color to the other wise neutral tones. They even add a really nice DODOcase sticker on the inside for authenticity. On the back of the cover, you’ll find a cutout for the rear camera. This allows you to shoot photos or video without having to remove your iPad Mini from the case. 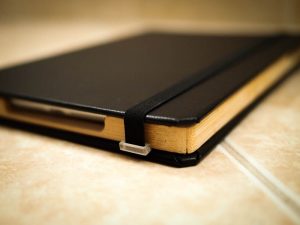 For those who like Smart Cover like functionality, the DODOcase Classic has it here too. They’ve embedded tiny magnets into the cover that will activate or deactivate the screen. In fact, these magnets on the DODOcase work so well, they can deactivate the screen before the cover even makes contact to the bamboo tray. The cover itself doesn’t even touch the iPad Mini screen and it still works. The magnets however does not hold the cover shut like other cases do. Instead, the DODOcase uses an elastic strap that wraps around the front cover to keep it shut, similar to those Moleskine notebooks you see. DODOcase has been using this type of strap since they were first released and honestly, I love it. I never have to worry about the cover accidentally lifting up and it keeps every shut nicely.

The last bit of goodness comes from being able to use the DODOcase as a stand for viewing videos and being able to angle it slightly for typing. You’ve always been able to do this with previous DODOcases, but on this one, there is a plastic clip now on the elastic band. The plastic clip goes on the back of the cover when it’s upright and it keeps the cover from slipping when propped up. It’s a very simple solution to a problem that I used to have with the original DODOCase.

I’m going to be blunt with my conclusion here and say that the DODOcase Classic for the iPad Mini is my new favorite case. Originally, I had shunned the DODOcase with my original iPad 2 because my device would keep falling out and it didn’t hold it in very well. Not the case with the iPad Mini. This version of the DODOcase holds it in tightly and securely and fixes what really was the one issue I ever had with a DODOcase. 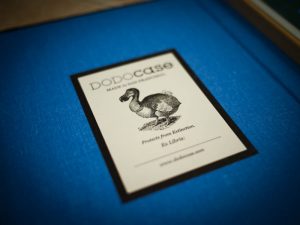 It looks great, is very protective, and I just love the type of materials used to make it. The bamboo has a very unique smell to it, but it’s nothing bad at all and I actually don’t mind giving it a little sniff every now and then. It has a very fresh, natural smell to it that only wood can give you.

There isn’t really anything I do not like about the DODOcase Classic for the iPad Mini. So far, I’ve had zero issues with it and it’s become my new default case. It’s also very light, yet strong and still remains fairly thin despite the bamboo tray. I love that it looks like a hardcover book on the outside which doesn’t draw attention to it, but still when people see it and realize that it is an iPad case, they love how beautiful it looks.

Look for the DODOcase Classic for the iPad Mini over at the DODOcase website here. They are available in three different colors and retail for $59.95. There are also other styles of the DODOcase but they sell for different prices.