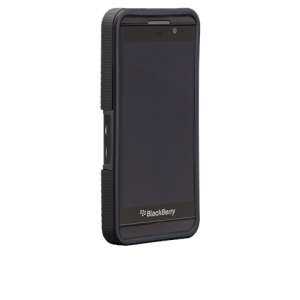 As you may know, I also own a BlackBerry Z10, BlackBerry’s newest smartphone. While the phone itself so far seems pretty resilient a lot less fragile than the iPhone 5, I still don’t entirely feel comfortable keeping it naked. There are times when I Want some solid protection for it and since I’ve had some solid experiences with Case-mate’s Tough line of cases, so I decided to go with their Olo Tough Case Classic for the BlackBerry Z10. Unlike some of their other cases, the one for the Z10 only comes in the traditional black for a more professional look.

If you’re familiar with the Case-mate Olo Tough cases, then you know that this one is a double layer case. It consists of an inner shock-absorbent silicone skin followed by a tough outer polycarbonate shell. 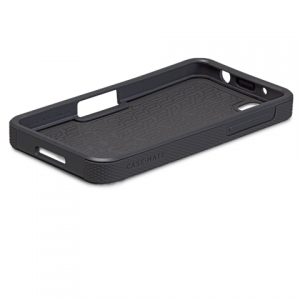 The silicone layer isn’t like normal silicone however. It’s doesn’t have that weird rubbery feel like some silicon cases do and instead is more plastic like. It also doesn’t attract lint and dust like other cases do. This layer is basically a band that goes around the outer edge of the Z10. It provides all the necessary openings for all the ports, speakers, and mic. The volume and media buttons along with the on/off button are covered for protection.

With the case on, it does make the BlackBerry Z10 feel a tiny bit larger both in width and thickness. It’s not anything super drastic but you can feel the difference in your hand. It’s still not as large though as some other tough and rugged cases out there and the added protection is welcome.

Overall, the Case-mate Olo Tough Case Classic for the BlackBerry Z10 is everything I expected it would be. It’s very protective like the previous Tough cases I’ve used on my other mobile device and the added protection is a welcome feature. It offers very good total protection for the body as well as lay flat protection for the screen.

The only real negative I have about the case is that the on/off button and volume/media buttons are a bit harder to use now as they don’t quite have the same kind of feedback anymore. They are still useable, just a bit stiffer now to use.

Despite that, having a case like this is more handy than using the included slip in case that came with my Z10 and doesn’t require me to have to pull it out of the case in order to use it.