The Ferrari Scuderia R300 headphones were something I spotted in CES 2013 and thought it would be good to check out. These are noise canceling which isn’t always my favorite kind to use. How would these fare amongst my many pairs of headphones, let’s see! 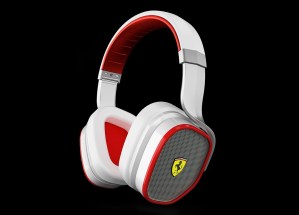 Right off the back the Ferrari R300 are attractive. The pair I had came in white and red, with some silver accents in the band. On the war cups the material looked carbon fiber looking and featured the Ferrari logo. While red and white wouldn’t be my first color choices (I’m more of an royal blue and black man) the combination does go well together. With the silver accents and the carbon fiber panels it does a good job of giving it a car like feel.

The Ferrari ScuderiaR300 also does come in black, red, and silver as well. So it will come down to which you are feeling more. 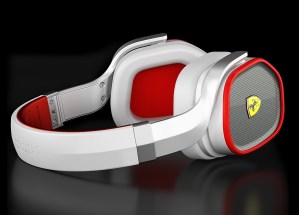 I was generally impressed with the sound from the R300! The bass first and foremost was very good but not overbearing. It was there I felt it but it was tempered. It played its position. When it came to the mids and highs the sound was equally good. Music played clearly and balanced. Music like Justin Timberlake’s 20/20 Experience sounded great, being able to hear both Justin and music both clearly and without either overpowering the other.

Tracks like Strawberry Bubblegum popped just right and ones like Suit & Tie did well with the instruments. I could hear the blare of the trumpets in a crisp way.

The Ferrari Scuderia R300 sat comfortably over the head, and during extended use didn’t hurt the ears. The ear cup cushions do a good job of keeping the ears comfortable and preventing sweating after extended use. Granted most of my time with them have been in colder weather, so I’m curious how it would fair in hot temperature. 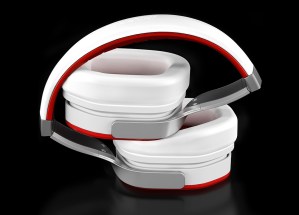 Now I mentioned earlier that these were noise canceling headphones, which is a type I haven’t liked really. This is mostly why; one I need batteries to power them and two most I have used won’t play without the noise canceling turned on. The Ferrari R300 headphones are no different in this regard. Make sure you always have a fresh pair of batteries with you or you won’t be listening to your music. I have used pairs of noise canceling headphones that even with this mode off you can still listen which comes in handy if your batteries die and you aren’t able to pick up some at the moment. There were a few times I started playing my music to be greeted with silence, only to realize I forgot to turn it on.

This might have been my only complaint with the R300s. Which is a issue with a few noise canceling headphones. Otherwise these are a great pair of headphones.

The Ferrari Scuderia R300 Noise Canceling headphones are a great pair of headphones, a good addition to anyone’s collection of headphones. If you don’t mind the the battery powered feature of it and you make sure you have fresh pair of batteries on hand. Now these being Ferrari, these don’t come cheap. This will set you back a cool $349.00 for a pair so I would think heavily on it first. But if you have the budget for it, you are getting back quality for it (though I think you are partly paying for the branding).

Setting out to build the ultimate workspace can be a challenge, especially if you're trying to build...
Read more