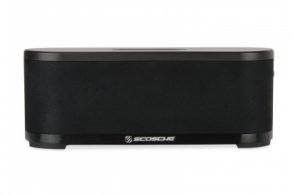 This is the second Scosche Bluetooth speaker that I’m taking a look at now and this one is the full sized BoomSTREAM. It’s very similar to the BoomSTREAM Mini in ease of use and ability to stream audio from your Bluetooth equipped mobile device. That doesn’t mean it’s just a larger version of the BoomSTEAM Mini however as it does have couple unique tricks up its sleeve that the mini version lacks. Not only is the BoomSTREAM a Bluetooth speaker and a speakerphone, but it’s also a portable battery charger. 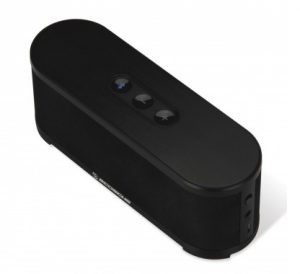 The first thing you’ll notice about the BoomSTREAM is the size. It’s much larger than the BoomSTREAM Mini and roughly the same size as something like the Jawbone Jambox or the NUU Splash that I looked at a few weeks back. It isn’t that heavy though which makes it quite portable if you need a little bit more oomph than a tiny speaker can give you.

The unit I received is a black on black unit which I believe is the only color available for the full sized BoomSTREAM. It’s got a real nice stealth look to it and the black doesn’t make it overly flashy. The basic black gives it that classic look which would make it look at home with any decor.

It has a basic pill shape to it which I’ve seen with other speakers so it’s nothing radically different. The top is brushed aluminum that looks pretty slick in black. Up here, you’ll also find 3 buttons that are worth mentioning. There is the Bluetooth button and the two volume buttons. What that means is that sadly, it doesn’t have media control buttons which allow for skipping of tracks. What you can do though with the Bluetooth labeled button is pause tracks and resume them again which is better than nothing at all. 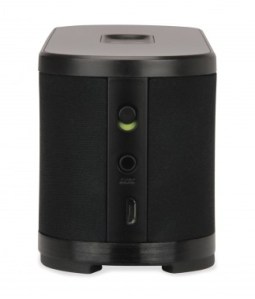 On the main body of the BoomSTREAM, most of it is covered in some kind of cloth which hides the speakers underneath. Behind the sloth is solid however so it’s not something you can easily poke through and rip. It does give the whole unit an old school box speaker look to it which is kind of nice. On the main body, on one side you’ll find the power switch, aux-in jack, and the USB charging port for the speaker. The aux-in jack is used for devices that do not have Bluetooth such as older MP3 players. With the supplied audio jack, you can use these with the BoomSTREAM. It also includes the USB charging cable.

On the other side of the body, you’ll find another USB port, but a full sized one. This one serves a rather unique function. It allows you to use the remaining available battery power from the BoomSTREAM and use it to charge something like your iPhone or any other mobile device that allows for USB charging. It’s a pretty cool bonus feature that I can see coming in handy, especially if you’re going to playing a lot of music on the go.

On the bottom of the unit, you’ll find that it is almost entirely rubberized with 4 extended rubber feet for grip. At the center, you’ll find a metal speaker grill which is where the down firing passive sub woofer is placed. This is also why their are rubber feet that lift the unit up a bit. That means in total, there are two 40mm speaker drivers and 1 passive sub woofer delivering crisp, clean audio. 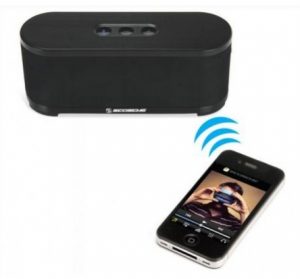 When you play music on the BoomSTREAM, you’ll mainly only be able to adjust volume on it or pause/play tracks. Tap the volume buttons to increase/decrease volume in steps or hold it down to quickly change volume to their extremes. Speaking of volume, this thing gets really loud if turned all the way up. Luckily, when turned off, it resets the volume back down to mid levels so that the next time you use it, you won’t get a big surprise if the volume was places too high.

Now, the one thing I found really surprising is that I could actually control Siri with the BoomSTREAM. Al I had to do was hold down the Bluetooth button a bit and it would activate Siri. Since the BoomSTREAM has a mic built in, I could just speak into it to give Siri commands. It was a surprising feature and one that I accidentally happened upon while playing with it. I don’t even think it’s an advertised feature.

As with the BoomSTREAM Mini, I really like the full sized BoomSTREAM. Yes I love that it can stream all my audio from apps as well as music and video, but that it also functions as a speakerphone. Not only that, it can activate Siri which was a surprise feature that wasn’t listed and it can function as a backup phone charger in an emergency. Just make sure you have your charging cable on you or you can’t use this feature.

The construction of the BoomSTREAM is also pretty nice, though there is a bit more plastic than I’d like. Even still, since it’s all black, the plastic bits aren’t as noticeable. The most important thing though is that the BoomSTREAM sounds pretty good. It has a nice even tone. The treble isn’t too high and the bass isn’t too low. It’s just perfect enough where you get a good range all throughout.

Overall, Scosche has a great product here with the BoomSTREAM. It’s also quite affordable when compared to the more expensive alternatives out there.