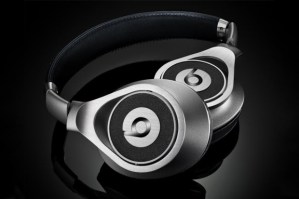 Another product recently released Post-Monster Era, Beats Electronics next product is the “Executive” geared more towards the business traveler. Whether 30,000 ft in the air or taking the cab to the next boardroom meeting. They look to fold up flat(fit in a briefcase perhaps?) compared to prior models of Beats that would have a curved look to them. This in turn looks to make them easier to pack up. They also have a much lighter feel to them then previous models and not such a “loud” bright effect if I must say.

Executives have ANC(Active Noise Cancelling) like the Studios which run on two AAA batteries. Not a fan they don’t work without battery life though. Looks like with these Beats is perhaps going for another audience compared to their previous one which is more the pop culture celebrity route.