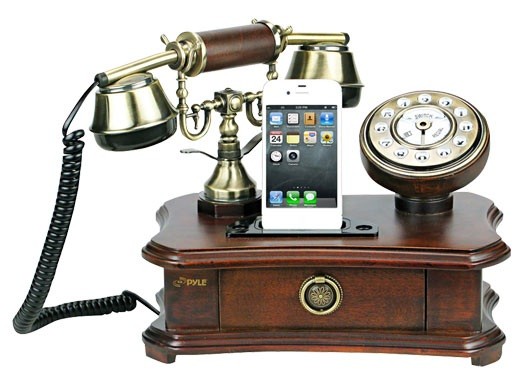 I know that in this day and age, most of our gadgets and gear should looks pretty modern and futuristic. However, there are people out there who love retro styled devices and have homes decorated a certain way where even something as beautiful and modern as an iMac would look out of place.

With that said, PYLE is introducing a new Retro Telephone Collection that works in conjunction with your modern smartphone. It’s basically an old school looking rotary phone that connects to your landline, but you can also dock your smartphone with it and use the handset to pickup those calls as well. They are beautifully designed classic phones that are handcrafted from real wood and adorned with brushed copper parts.

The Retro Home Telephone Collection retails between $89-109 and is available at Pyleaudio.com. Check out the full press release below for more detailed information.

NEW YORK – November 20, 2012 – Pyle®, manufacturers of home, car and pro audio equipment, unveils its Retro Home Telephone Collection for smartphones. Designed to resemble old-fashion rotary phones, the Retro Collection features simple-to-use buttons for answering landline and smartphone calls. Users can easily switch between the two devices, merging the simplicity of a landline with the feature packed smartphones of today. The Retro Home Telephone Collection ranges from $89.99 to $109.99 (MSRP) and is available on Pyleaudio.com.

These classically designed rotary desktop telephones (PRT55I, PRT35I, PRT15I , PRT25I), handcrafted from real wood and adorned with brushed copper parts, work with landlines allowing for normal telephone functions, as well as smartphones. In addition to letting you talk on your smartphone in style, using the handset also helps shield you from up to 99 percent of the radiation absorbed when speaking directly into cellular phones.  The collection is compatible with all 3.5mm jack mobile phones and tablets, including iPhone, Android, Blackberry, iPad and the latest MacBooks.

“We are excited to bring the classic style rotary phone back to the 21st century,” says Abe Brach president of Pyle Audio. “Using a handset not only helps eliminate 99% of the radiation absorbed by your body while using a cell phone, but also looks good while doing so.”

•    Retro-style telephone with handcrafted wood base and brushed copper parts
•    Standard telephone features and functions including last number redial flash function, and ringer high/low selection.
•    Compatible with any mobile device with a 3.5mm jack
•    Eliminates up to 99% of the radiation absorbed from direct cellphone use
•    One button pick-up/hang-up
•    One button transfer between landline and smartphone
•    PRT35I model also charges your mobile device

The Retro Home Telephone Collection from Pyle is available online at www.PyleAudio.com.