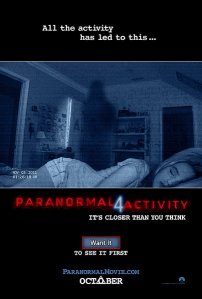 As I stated in my last review a week ago, the seasons Halloween movies are in full steam. This past weekend brought the 4th installment of the Paranormal Activity franchise. In the latest installment the story focuses on the family that lives across the street from the family in the second film, but years later. The baby from the previous movie is no where to be found. As you may remember, the little baby was taken by his aunt Kate at the end of the movie. Instead there is a new little boy, who now lives in the house and he likes to show up on the neighbors property uninvited. When the mother of the new family learns that the little boys mother is ill and has been taken away, she promises to let him stay at her family’s home until his mother returns. Once he is in the house, the evil from the first three movies comes with him and strange things start to happen. Of course all of this is videotaped by the new family’s daughter. 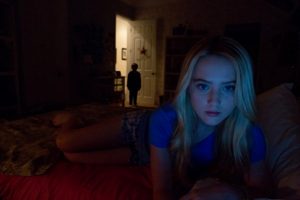 I have to admit that after seeing this film, I had to refer back to the first two films to get a clear understanding of what was going on in this one. That is the only way I’m able to best give you the most accurate detail of events of film for this review. Just like all of the previous films, there are a lot of doors opening, and loud sounds to give it that creepy element, but with the previous installment and now this one they added more visual effects to enhance the scare value. I did not really like the first two movies, and I thought the third one was a little better. I would say that this one is the best one yet. All in all, it’s mostly the same type of stuff as in the first three movies. You still don’t get to see the paranormal entity, but you do get to see some other frightening images to send shivers down your spine. Also, there are a couple of “in your face” scares to keep the movie flowing. The movie still leaves some questions to be answered. After watching this sequel, I find it odd that the baby’s name in the second film was Hunter, but it’s not his name in this one, so go figure! The reason I question this change, will be explained, if you decide see the film. The writers of these films have cranked out these movies every year since 2009, and it seems like its starting to show in the scripts that they are not putting too much thought into the way the story is being told. Have no fear though, it seems like they will have another installment next Halloween season, October 2013. Will it be worth it? That’s up to the fans, upon which, I am really not one of. I give this installment 2 ½ scares out of 4. It’s getting a little better with each film, but how long do I have to wait to actually be as frightened as the trailers make it out to be. The movie runs 1 hour and 35 minutes. It’s rated R for language and some violence/terror. It was directed by Henry Joost & Ariel Schulman.

Sometimes things that go bump in the night, should stay undiscovered – Ezo
Next film reviewed: TBD