Let me start this by saying that I don’t pretend to call myself Captain Planet or anything like that. If I had my choice of car to buy from Chevy, currently my eyes are on that gas guzzling Camaro. I do think if I can drive something cool, and help save the planet, think OK fine. So far I haven’t seen anything like that…until now. The Chevy Volt is the first electric car, that helps you go green but at the same time gives you the peace of mind of still being able to go when the battery dies down by allowing gas to be use. Now while you can use gas in the car, it is still better since it isn’t powering a gas engine. I had a week with the Chevy Volt and here is what I think about it.

Here is my problem with green cars, they’re ugly! The industry wants me to pay a premium to drive a car that is easier on the planet, yet it is ugly compared to all their gas using counterparts. That is like the food experts saying we need to eat healthier, but yet all the healthy food costs double what a McDonald’s will cost, and doesn’t taste as good as a Big Mac and some fries. I’m looking specifically at you Toyota Prius, it may be a popular hybrid car, but I wouldn’t be caught dead owning one, as that thing is ugly as hell to me. Enter the Chevy Volt. This car is awesome looking! It looks sporty, has clean sharp lines, the design is on point, and has this futuristic American muscle feel that only maybe Chevy could do. From the outside the Chevy Volt looks cool, modern, and fashionable. It hasn’t failed to impress anyone I have driven passed with it. From young children crossing the street taking extra time to look at it at the stop light, to random strangers sticking their head in the window to ask about the car and give it a look, its impressions are left on many people. During my review period, I frequently parked it in a midtown garage during the day. One night when I went to pick it up, you can see the space was filled with upper class people picking up their Benz, Bimmers, and Lexus vehicles. All high class luxury cars, but when the attendant rolled out the Chevy Volt, I was in shock at the looks and stares the car was getting. One man even shouted a “Wow, very nice!” as I entered the car. The Chevy Volt has a bold look to it, that commands attention due to his unique look. On the inside the coolness continues, with sporty bucket seats, cup holders, and little storage spaces. It also continues with the futuristic feel with no analog display gauges, instead hastwo LCD panels that display all of the system you need for the operation of the car. There are touchscreens, XM radio, DVD players, and OnStar available for the Chevy Volt. The Chevy Volt is definitely a looker from inside and out, and would more than like be the car Captain Planet would drive (ya know, if he couldn’t fly and all), or more so would make you proud to show off your planet saving efforts.

One of the main reasons we wanted to check out the Chevy Volt was obviously because of the tech in this bad boy. With a name like Volt, you would expect this car to be overflowing with tech goodies, and the Volt doesn’t disappoint. Let’s start with its operation. The Volt is an electric vehicle. You can plug it into any 3 prong outlet and let it charge overnight. When you plug it in, there is a little LED on the dash towards the window that glows red (just like a smartphone) to let you know it is charging, when it is done it glows green. When the Volt is fully charged you can drive a total of 35 miles on electricity alone. Now I calculated via Google Maps how many miles my commute would be from my home in the Bronx to the car garage a block up from my job. The total trip is 9.6 miles. So on a daily round trip, I would go about 19.2 miles. Leaving me 15.8 spare miles left on electric only in case I need to run some local errands. If I plugged in my car every night and mainly went to work and back, then in a month’s time I would literally spend nothing in gas cost. But what about the cost in electricity to charge it? Well from the Chevy.com website it has that for most people it will cost about $1.50 a day or $46.50 a month in electricity cost. But I’m pretty sure you have just about the same or more plugged in your home if you have many appliances, PS3s, computers, TVs, and more so the cost won’t be crazy. So imagine that, no real gas spent during a month of commuting to/from work! Nice! And the tech doesn’t stop there. If you hooked up your Volt as the one I reviewed, there are some many cool things inside. BOSE speaker system, DVD Player, Navigation system, XM Radio, LCD screens (no analog gauges, all digital), touchscreens, USB ports, charging docks, heated seats, OnStar and more. The Chevy Volt even those this really cool welcome screen and sound after you unlock the car and get in. Check the video I recorded to the right. And if that wasn’t cool enough, the power on and off sounds makes it feel as if I’m turning one a spaceship, all very cool! The tech goodness in this car is all so cool, that you’ll have plenty to do, press, figure out, before you even put the car into drive.

And let me not forget that yes, “There is an app for it”. The Chevy Volt has apps for iOS and Android in the OnStar RemoteLink and the myChevrolet app. So that is just a new level of cool right there.

From approaching the car to exiting after a finished drive, the Chevy Volt doesn’t disappoint on the experience. As I mentioned before, when it comes to green tech cars, most have been ugly to say the least. It is nice walking up to a car that looks good, and does good at the same time. During the entire time using the Chevy Volt, there wasn’t one time as I walked up to the car where someone wasn’t checking it out, or gave me a nod in approval at the look at this vehicle. The Chevy Volt has a key less entry and start up process, so I literally just need to unlock the door and then put the key in my pocket. The start up sounds of the car are very cool, and adds to the experience. There is also something to be said for having a electric motor engine that makes no noise. Inside the cockpit, it is just me, and my music which with the BOSE speaker system sounds great. No engine noise gives way to a quiet and comfortable ride. When driving the Volt, I especially like the active navigation system. Even when not in use (by use I mean inputting a designation and then following the route) the system would alert me of traffic slow up along the way which I found very useful.

*Updated* – I made a comment about the placement of the Lock/Unlock button, but a few Volt owners let me know about small button on the door that allows you to unlock it the door. I found the button and love it, it allows me to unlock the door without even having to take out the key from my pockets. So I retract my comment below.

Overall the ride was smooth and enjoyable. There were only a few minor items that wasn’t as cool. And I wish in addition to being able to connect your phone via Bluetooth to make/receive phone calls, you could also use it to play your music from your phone. I mean the AUX IN input is cool and does the job, but in a car with this much tech inside, not being able to play music via Bluetooth and having to plug in a 3.5mm cable seems lame. This is the Chevy Volt, go all in and let us play music like I can in the Lincoln MKX or MKS. Other than this, the Chevy Volt is an great automobile.

The Chevy Volt right now is one of a kind, having an electric motor and only using gas to generate more electricity when the battery is depleted. Allowing you to spend no money on gas for the daily work commute, but also giving you the option to take a road trip if you so choose, and looking quite stylish while doing it. There are some negatives, but so far they are minor. The cost for the Chevy Volt starts out at $39,145, which can be quite steep to most. It does come with a government tax credit of up to $7500 though, and think of the gas you could be saving. However it should be noted, that I think this car is currently at least best if you are a suburbanite or someone who has reliable access to a place where they can plug in their car each night. If not you will still be using mainly gas with this car, and there are cheaper options if you will mainly just be using gas. But we are looking to the future. In a world where there will be most accessible charge stations, then the Chevy Volt will really shine.

Would I buy a Chevy Volt? Honestly the one I’m using as equipped put the price tag around $43,000+, and for that price I would probably get a fully equipped 2012 Camaro Coupe 2SS. But that isn’t really a family vehicle though. I will say this, I would place it among my list of top choices, especially taking in consideration the month on gas I could be saving (if I lived somewhere where I could plug it up of course). If you live in suburbia, I would suggest you give this a strong look. It looks great, rides good, saves you money on gas, and you get a tax credit for buying. 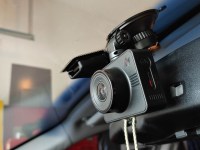