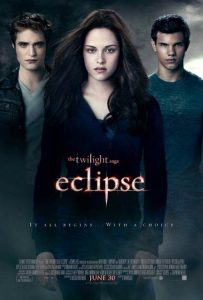 Well it was a Twilight July 4th weekend, with the 3rd installment of the franchise; Eclipse raking in $262 million worldwide in its first five days of release. In this one, Bella (Kristen Stewart) is about to graduate high school and she finds that she is still in mortal danger from the revenge seeking Victoria (Bryce Dallas Howard) who is still out to get even because Edward (Robert Pattison) and his family the Cullenâ€™s killed her mate. Also there is an outbreak of disappearances in Seattle that has the Cullenâ€™s worried that someone is putting together a vampire army to invade their town of Forks, Washington.

Meanwhile, Jacob (Taylor Lautner) is still trying to win the heart of Bella and keep her from what he feels, is a big mistake in her wanting to be turned into a vampire by Edward. Bella knows that this decision may start an all out war between Edward and his family of vampires and Jacob and his band of werewolves, but she cannot deny her true love of Edward and the decision that she intends to keep after she graduates. With the love that both Edward and Jacob have for Bella, they must put their differences aside, if they are to keep her from harmâ€™s way from the impending danger that is coming. Vampires and Werewolves will have to join together if they are to have any chance at defeating the army of â€œnewborn vampiresâ€ that are heading their way. Will the two clans be able to work together? Plus does the Volturi and Jane (Dakoyta Fanning) have a hand in all of this? This may be the defining moment in Bellaâ€™s life and the choices that she makes. 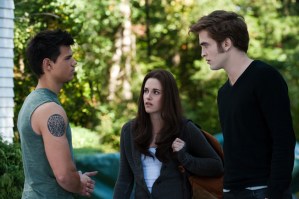 This installment was billed as being the one with the most action out of the first three movies. It did have an adequate amount of action towards the end of the movie, but it also continued to basically be a love triangle storyline. They gave us an origin of two of the Cullenâ€™s members, along with the story of how the wolves came to be. The new character, Riley (Xavier Samuel) was good as the leader of the vampires called â€œNewbornsâ€, who were stronger and more blood-thirsty when first turned. One surprise that I enjoyed was Jasper Cullen (Jackson Rathbone) and his fighting ability. He was the only one who knew how to fight these newborns and had to train everyone else on how to defeat them. When it came down to the battle scene towards the end, he handled himself quite well against them, killing some with just a single blow. The love triangle heated up in this one as Jacob was convinced that Bella loved him just as much as she loved Edward, but was just too scared to admit it.

The Volturi had a small role in this one, but it seems to be leading up to a final confrontation with them in the next chapter. There were also some very funny scenes in this one, such as the interactions between Edward and Jacob. This movie had the two of them together more than either of the first two stories. They actually have a heart to heart talk with one another about their love of Bella. I felt this movie was just as good as the first two. I feel they have all been a mixture of love story and action, just enough of each to keep everyone entertained. I give this movie 3 bites out of 4. It continues to be a great story, and is becoming more and more action filled with each chapter. The movie ran 2 hours and 4mins. It was rated PG-13 for intense sequences of action and violence, and some sensuality. It was directed by David Slade. It was written by Melissa Rosenberg from source material from Stephanie Meyer. It was produced by Temple Hill Entertainment, Imprint Entertainment. It was distributed by Summit Entertainment, LLC.

If you ever find yourself in a love triangle, youâ€™re pretty lucky. Ezo
Next weekâ€™s review: TBD