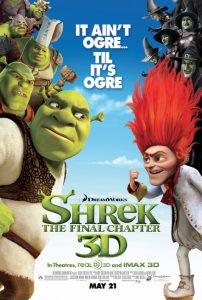 This past weekend brought us the 4th and final installment of the Shrek movies. In this one, Shrek (Mike Meyers) finds himself going through somewhat of a midlife crisis. He is now just a married father of three, and he longs for the days when he ruled the forest and struck fear into all that came into his presence. He feels he is no longer a real ogre. Then Shrek meets a smooth talking dream giver named, Rumpelstiltskin (Walt Dohrn). He promises Shrek that he can give him his wish of once again being a terrifying ogre for one day, for in return of Shrek giving him one day of his life he doesnâ€™t care about. Shrek agrees, but after he wakes up in his new alternate version of Far Far Away, he soon discovers that there have been a lot of changes. The most drastic change is that now Rumpelstiltskin is the ruler of Far Far Away, and Ogres are hunted and enslaved in his castle. On the run, Shrek finds the secret hideout of the last remaining ogres and Fiona (Cameron Diaz) is their leader. Shrek only has until daylight to convince Fiona that they were once married with kids, if he is to ever be able to return to his past life. With the help of Donkey(Eddie Murphy) and Puss(Antonio Banderas), who donâ€™t even know him in this alternate world, will he be able to make things right again? Or will he fail and therefore be erased from existence.

The Shrek storyline has been a fun filled adventure, and this was the perfect way to end it. Just like in the first one, this last one brought the love back into the storyline between Shrek and Fiona. I feel this one was just as well written as the first, and it had just the right amount of comedy and adventure. The other two stories in-between these, although were also good, they mainly were just comedic and silly. This one brought the romance back to the story. All of the actors once again came back to reprise their roles and you can tell that the chemistry was still there. They were still having fun doing these voices and bringing these characters to life. It actually made me sad that they are ending the series, but itâ€™s better to go out on top, then to overstay your welcome. The new character Rumpelstiltskin was hilarious as the shady dealmaker, where all of his deals eventually benefitted only him.

Eddie Murphy as donkey was once again funny as ever anytime donkey spoke. I also believe Eddie voiced one of the ogres in the movie as well. Youâ€™re know itâ€™s Eddie, when you hear it. Antonio Banderas as Puss N Boots was also hysterical as a fatter and lazier version of his former self. All in all I enjoyed this movie very much. It makes me want to watch all of them all over again. I gave this movie 3 wishes out of 4. Itâ€™s a fun filled, laugh out loud, enjoyment for the whole family. The movie runs 1 hour and 34 mins. Itâ€™s rated PG for mild action, some rude humor and brief language. It was written by Josh Klausner and Darren Lemke. It was directed by Mike Mitchell. The film was distributed Paramount Pictures. It was made by DreamWorks Animation Studios.

Sometimes the best wish you can have is something you already have. Ezo
Next Weekâ€™s Review: TBD