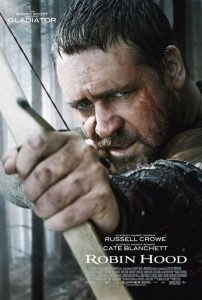 Russell Crowe is back in the new remake of the classic story of Robin Hood. In this feature we see how Robin Hood (Russell Crowe), got his start in Nottingham. As an expert archer in King Richardâ€™s (Danny Huston) army, he fought against the French who were trying to take over England. When King Richard is killed in battle, his army starts to fall apart. This gives Robin and his band of friends the opportunity to set out on their own. While on their travels, they come across a group of knights who have been attacked by some French soldiers. They find that one of them is still alive, and with his dying wish he asks Robin to take his sword back to his home of Nottingham. They travel to Nottingham, a town suffering from corruption from its sheriff (Matthew MacFadyen) and the constant marauding from a gang of runaway kids. When Robin returns the sword to the Knightâ€™s home, his father Sir Walter Loxley (Max Von Sydow) begs Robin to stay in Nottingham and become his sonâ€™s widowed wife, Marion Loxleyâ€™s (Cate Blanchett) new husband ,so that he can keep the town from falling apart any further.

Meanwhile, after hearing that his brother King Richard has been killed, Prince John (Oscar Isaac) takes over as ruler of England. He hires the help of a soldier named Godfrey (Mark Strong) to help bring the kingdom back to its days of wealth and power. Robin Hood discovers that the French are planning a massive attack against England. So he and his band of friends, Little John (Kevin Durand), Will Scarlet (Scott Grimes), and Friar Tuck (Mark Addy), set out to gather all the other armies together in an attempt to protect their country, and bring it back to its former glory. 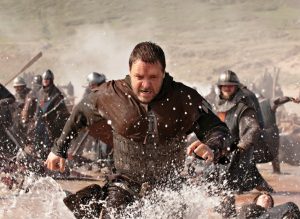 I was a huge fan of the Robin Hood story every since I was a child. This story has been remade many times during the years. There have been over 50 different TV or movie versions of the adventures of Robin Hood dating all the way back to 1908. Two of the most acclaimed versions were â€œRobin Hoodâ€ which starred Douglas Fairbanks in a 1922 a black and white movie, and Errol Flynn in â€œThe Adventures of Robin Hoodâ€ which came out in 1938 in Technicolor. Then in 1991 Kevin Costner donned the tights in the starring role of â€œRobin Hood: Prince of Thieves. There have also been countless books, children cartoons and even comedies that have focused around this character. Robin Hood has been in American folklore for many generations, even though itâ€™s based on an English character. So now here it is again in a 2010 remake. Besides Fairbanks, Flynn, and Costner, there hasnâ€™t been too many who can pull off portraying this character. Well now you can add Russell Crowe to that short list. I felt he was excellent in this movie, and made the character gritty, yet very likable, which is what the audience is supposed to feel about the character. Even though he was a thief, he did so, so that the less fortunate could share in the wealth that the kingdom had. His motto: â€œSteal from the rich, to give to the poorâ€.

In this version of his story, they took us back to the beginnings of his adventures, way before he became a legend. It showed how he became an orphan and how he once served under King Richard the Lionheart, as one of his top archers. It also showed how Prince John became King and quickly abused his power over the land. The story was well written, and the supporting cast all did a wonderful job. Cate Blanchette can do no wrong when portraying a woman in a historical role. She gives every character she portrays, grace and elegance. I felt that she and Crowe worked very well together in this movie, and I canâ€™t wait to see if they make a sequel. Like I said this was the beginning of Robin Hoodâ€™s Legend, and it didnâ€™t focus on his adventures in Sherwood Forest. That can be in the next installment. I gave this movie 3 arrows out of 4. It was a well written, well acted and even though it was long at no time did it become slow or boring. The movie ran 2 hours and 20mins. It was rated PG-13 for violence including intense sequences of warfare, and some sexual content. It was written by Ethan Reiff, Cyrus Voris, and Brian Helgeland. It was directed by Ridley Scott. The film was produced by Imagine Entertainment, Scott Free Productions, and Relativity Media. It was distributed by Universal Pictures.

In todayâ€™s world the thieves take from the poor and they make themselves rich. There called Politicians. Ezo
Next weekâ€™s review: Shrek Forever After