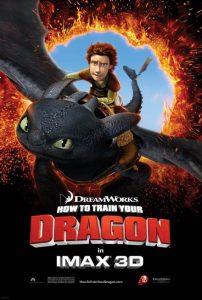 Right behind his romantic comedy, â€œSheâ€™s out of My Leagueâ€, Jay Baruchel voices a Viking teenager named â€œHiccupâ€ in the new 3D animated movie â€œHow to Train Your Dragonâ€. On the island of Berk, fighting dragons is a way of life for the Vikings. Hiccupâ€™s father and leader of the tribe, Stoick the Vast (Gerard Butler) wants very much for his son to follow in his footsteps and become a great Viking warrior and help fight the dragons that attack the village for its livestock. When Hiccup joins the dragon training course, he believes it will give him a chance to show that he has what it takes to fight dragons.

One night the village is attacked and Hiccup miraculously shoots one of the rarest and most unknown dragons called a night fury. No one believes him, so he sets out to find the injured dragon so that he can kill it and prove to everyone that he was not lying. When he does come face to face with the beast, he discovers that he doesnâ€™t have the heart to kill it. He soon befriends the dragon, and names it â€œToothlessâ€. After a short time he is able to train the dragon and discovers that they are not the terrible menaces that they are believed to be. Now he must convince his father and the rest of the tribe of what he has learned about dragons, before they find the nest of the dragons and stage an all out attack on them.

Now just like all animated movies that I have reviewed, my daughters accompanied me to see this film. They both enjoyed it very much, and were very impressed with the 3 dimensional effects. I enjoyed this movie as well. It was a great story that taught that you canâ€™t always judge something you donâ€™t understand. It also taught about compassion, loyalty, and friendship. The visuals were amazing, as they incorporated many different species of dragons into the story, each with its own look and color scheme. The movie was funny and adventurous and kept me entertained throughout. The actors and actresses who voiced the characters in the movie did a superb job, and it was good that they didnâ€™t do anything over the top, like giving the dragons voices. The main dragon, Toothless expressed all of his feelings with facial expressions and that gave the character warmth and charm that wouldnâ€™t have been there if he was talking. Although this movie was about Vikings fighting dragons, there wasnâ€™t a time when I thought that it was too brutal or harsh for children. All in all it was an outstanding movie, well worth the price of admission. I gave this movie 3 dragons out of 4. Kids will be happy you took them to see this movie, and adults will enjoy it also. The film is rated PG for sequences of intense action and some scary images, and brief mild language. It runs 1hour and 30mins. It was written by William Davies, Christopher Sanders, Dean DeBlois, Peter Tolan, and Cressida Cowell. It was directed by Christopher Sanders and Dean DeBlois. It was produced by Mad Hatter Entertainment. It was distributed by Paramount Pictures.