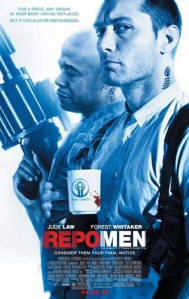 In the future humans will be able to live a longer life span thanks to a company called The Union. Their special technology of designing artificial organs to replace your worn out ones is a giant leap forward in the advancement of medical science. For a pricey fee anyone can have a second chance at a healthy life. There is one drawback though. If you are late with your payments, they will send their highly skilled repo men to retrieve their property back, with no regard for your well being. When one of The Unionâ€™s top repo men, Remy (Jude Law) is accidentally electrocuted and has heart failure, he wakes up to find that they have fitted him with their top of the line heart transplant.

Now Remy is also under contract, for a heart he did not ask for. When he goes back to work, he discovers that the side effect of his operation is that his heart is no longer into his job, and he soon gets behind on his payments. Now he too has become the hunted, and he winds up with another debtor named Beth (Alice Braga) who shows him how to stay one step ahead of the repo men. The Sales Manager of The Union, Frank (Liev Schreiber) is not happy with the whole situation, and he sends his second top repo man and Remyâ€™s ex-partner, Jake (Forest Whitaker) to either convince Remy to change his ways or retrieve the companyâ€™s heart back. Now Remy must come face to face with the hardest choice of his life, continue repossessing or bring The Union to its knees and free all of the debtors of their debts. 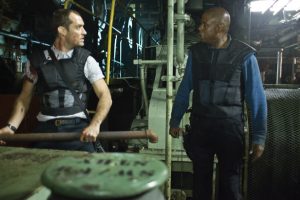 This was a really compelling and interesting story, which kind of mirrored reality with todayâ€™s health and life insurance companies. You either pay or your coverage is taken back. It was very easy to see this type of future being a reality aside from the method of repossessing the implants that is. Think about it, there are great advances in the technology of organ and limb transplants going on right now. If you can afford it, there are many ways to keep you living a longer life, but your insurance payments have to be made, thatâ€™s for sure. In the case of this movie, The Union would give you an organ and set you up with a payment plan, just like the banks do when you purchase a home or a car, then as soon as youâ€™re a couple months behind, their coming for their property. I thought Jude Law and Forest Whitaker worked good together in this movie. It seemed like they had a great chemistry as two guys who had grown up together as friends and then partners. Liev Schreiber played the sleaziest of salesmen, you could think of. He was not going to let any sale get away, and he cared nothing about the financial burden it would put the person in.

I had never seen Alice Bragaâ€™s work before, but she did a good job as Beth, a multiple organ receiver and Remyâ€™s love interest. I do know that she will be in the new Predators movie coming out on July 9th of this year. I rate this movie 2 Â½ organs out of 4. There wasnâ€™t too much action till towards the end of the movie, but it was a great story. The film ran 1hr. and 51mins. It was rated R for strong bloody violence, grisly images, language and some sexuality/nudity. It was written by Eric Garcia and adapted to a screen play with the help of Garrett Lerner. It was directed by Miguel Sapochnik. The film was produced by Stuber Pictures, Relativity Media. It was distributed by Universal Pictures.

Make sure your insurance is up to par, you never know when you might need an organ transplant. Ezo
Next weekâ€™s reviews: How to Train Your Dragon & Hot Tub Time Machine