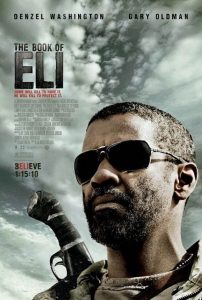 Denzel is back and heâ€™s on a mission. In his new movie Denzel Washington plays Eli, a man who has been walking for 30 years across whatâ€™s left of America after the final war. Itâ€™s a wasteland of ruined cities, demolished highways, and cannibalistic gangs ruling the roadways. Eli is on a mission to deliver the last Bible in existence to a safe place out west.

While on his travels he runs into a makeshift town run by a man named Carnegie (Gary Oldman). After having to kill a couple of Carnegieâ€™s men, He is asked to stay. He declines, but agrees to stay the night. Carnegie also has an interest in finding a bible. He believes that with the words of the Bible he can rule over even more people and territories. He sends his womanâ€™s daughter, Solara (Mila Kunis) up to Eliâ€™s room to spend the night with him. The next day he discovers that Eli has a Bible in his possession, when Solara tells him she saw a book with a cross on it. Carnegie wants this book badly and wonâ€™t take no for an answer. Eli must now face off against Carnegie and his men, if he ever wants to get his sacred Bible to its destination. 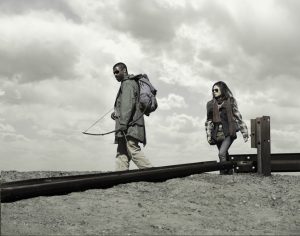 I thought this was a compelling story. It showed how after the world was in ruins, there was only one hope of rebuilding a civilized existence, and that would start with the words from the Bible. It was the only Bible left because after the last Great War which was over religious beliefs, all bibles were destroyed. I also felt that Denzel looked convincing in his fight scenes. There werenâ€™t any over exaggerated fights, and it was believable. The fight scenes move quickly, so you have to watch closely to see all the action going on. There was a moment that kind of brought back memories of â€œRoad Warriorâ€, but can you make a â€œworld in ruinsâ€ movie without there being references to that movie? Probably not! Anyway, the movie was worth seeing and there was a twist ending that I did not see coming. I give this movie 3 Bibles out of 4. It was entertaining, action packed and even funny at times. The movie ran 1 hour and 58 mins. It was rated R for some brutal violence and language. It was written by Gary Whitta, and re-written by Tony Peckman, Albert Hughes, Denzel Washington, and Allen Hughes. It was directed by Albert & Allen Hughes. It was produced by Silver Pictures, Alcon Entertainment. It was distributed by Warner Bros. Pictures Distribution.

When your world seems like itâ€™s coming to an end, you can always look to the Bible for strength. Ezo
Next Movie Review: Legion