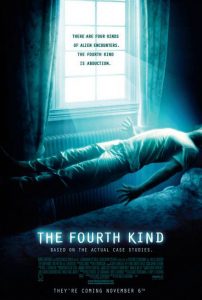 So I went to see this movie over the weekend with high speculations. The movie tells the story of Dr. Abigail Tyler, a psychologist who lives in Nome Alaska. Since the 1960â€™s this town in Alaska has had several people disappear without any clues as to their whereabouts or what happened to them. Dr. Tyler starts to do a study about whatâ€™s going on, when some of her patients all tell her that they are seeing the same image of a white owl in the middle of the night, outside their windows. She then starts hypnosis as a way of getting them to relive what is really going on while they are asleep. What she encounters from her patients is something she could have never imagined. Are these residents in her town being abducted by aliens?

This movie is a mixture of filmed scenes, with Milla Jovovich as Dr. Abigail Tyler, and actual footage and audio recordings taken from the sessions that the “real” Dr. Tyler videotaped. Now I am an avid believer that there may well be other forms of life that exist outside of our planet. So after seeing this movie I had to do some research of my own on its authenticity. I have learned that even the supposedly actual footage in this movie was not so. It too was filmed. I have also read the stories about this town in Alaska, and all of that seems to be true. People have disappeared since the 1960â€™s all the way up till 2004, but the reasons behind the disappearances have been chalked up to the town being an area with bars and liquor stores, and that the people probably were drunk and died of weather exposure or fell into the Jetty with goes into the frigid Snake River.

So once again Hollywood has duped itâ€™s audiences with what is perceived to be real, and in fact is just more PR hype. I will say that this movie was much better than â€œParanormal Activityâ€. Although itâ€™s still just a film and no actual footage went into making this film, I still enjoyed it. It was well made, and well acted by Milla Jovovich. I give this film 2 Â½ abductions out of 4. I wasnâ€™t disappointed at the end of the movie. I was just curious about what I had just witnessed. Which is a good thing? It got me to do some research, before giving my review. The movie runs 1 hour and 49mins. Itâ€™s rated PG-13 for violent/disturbing images, some terror, thematic elements and brief sexuality. It was written and directed by Olatunde Osunsanmi. It was produced by Gold Circle Films. It was distributed by Universal Pictures.

Reviewed by Eric Williams
Is there life outside of our planet? Will we ever have actual, credited footage of an encounter?
Next Review: 2012