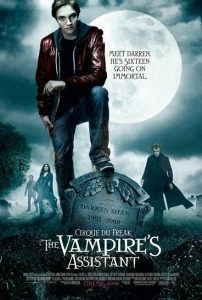 When a traveling freak show comes to theyâ€™re town, two best friends, Darren (Chris Massoglia) and Steve (Josh Hutcherson) decide this is a show they cannot miss. Without the consent of their parents and the outright disapproval of their teacher, they sneak out to go see the show. After the show is canceled by towns people who storm the performance, the two get separated while trying to flee from being seen by theyâ€™re teacher. Darren ends up in the dressing room of the lead performer, Larten Crepsley (John C. Reilly). He then steals a much cherished pet from Crepsley. In turn the pet ends up biting his friend Steve, and he becomes very ill. Now he must go back and tell Crepsley what he has done, so that his friend can be cured.

In return for helping his friend from a certain death, Crepsley tells Darren that he must become his assistant. Thereâ€™s just one hitch, Crepsley is a vampire, and Darren too must become a vampire and leave all of his loved ones behind and travel with the show. Darren agrees, but at what cost will his decision make on everyone else around him.

This is the first movie adaptation taken from the Cirque Du Freak book series written by Darren Shan. The story has somewhat been changed, but the plot remains the same. I thought this was a great first start of whatâ€™s to be an amazing series of movies. The books were geared towards young children ages 9-12, but I believe any age group can find themselves enchanted by this story. Itâ€™s funny, creepy and sometimes violent, as it tells the story of two factions of vampires who have been at war for centuries. The main vampire of the story, Crepsley travels with a circus full of freaks, which ranges from everything from a snake boy to a werewolf. Thereâ€™s a lot of amazing special effects in this movie and it will keep you entertained throughout. The cast is great, and the story is well written. John C. Reilly gives an outstanding performance as Crepsley. You really canâ€™t tell if he actually doesnâ€™t want to be involved in the war anymore or if heâ€™s just setting up his defense. Another stand out performance goes to Michael Cerveris, who plays Mr. Destiny. He stands alone at the center of this ongoing war, and loves the fact that he is orchestrating its outcomes. Salma Hayek is also in the movie and she plays Madame Truska, a bearded clairvoyant, who I might add is still very sexy even with a full grown beard.

I canâ€™t wait to see whatâ€™s next in this series. This story was just a prelude of whatâ€™s to come, and Iâ€™m sure itâ€™s only going to get better. I give it 2 Â½ bites out of 4. Hopefully all of the cast have already agreed to be in the rest of the chapters to this story. The movie runs 1 hour and 42mins. Itâ€™s rated PG-13 for sequences of intense supernatural violence and action, disturbing images, thematic elements and some language. The screenplay was written by Brian Helgeland and Paul Weitz from source material from the Cirque Du Freaks series of books written by Darren Shan. It was directed by Paul Weitz. It was produced by Depth of Field, Donners Company. It was distributed by Universal Pictures.

Reviewed by Eric Williams
Remember freaks are people too, and they may also be dangerous. Ezo
Next Review: TBD