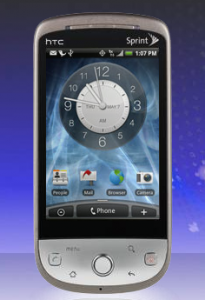 There is a lot to like about the new HTC Hero from Sprint. Itâ€™s the first Android device on Sprintâ€™s network and I think that it comes at a time when the Android OS is seasoned enough to compete against other big players, like RIM and Apple. I had about a week to test the device and get a feel for it so I tried to cover every nook and cranny to really see what this device would be like for everyday use.Â  After spending a good amount of time with it I must say that this device is definitely a good option for those who love virtual keyboards, Google, donâ€™t mind a little sluggishness every now and again, and love social media networks, oh and apps too.

The device is slim with a nice solid and sturdy feel to it. I donâ€™t know much about the quality of the materials but they feel expensive.Â  I prefer the look of the Sprint Hero to the European version that has the infamous chin. This device definitely feels nice to hold and doesn’t feel like it’s going to fall apart in my hands.

This feature is what is supposed to primarily set the Hero apart from other Android devices yet it seemed like something was missing. I initially felt like using different screens and adding widgets felt a little clunky and I still maintain that position. It is nice to be able to access quick bits of data easily without having to launch full applications but for my type of usage this gets a bit crowded. And then there is the issue of remembering where I put each widget. Also I have to scroll from left to right instead of there being some kind of shortcut to get to a particular screen. I found myself adding a lot of widgets to the first panel and not really utilizing all 7 screens.Â  Maybe if I had more time with the device my opinion of this feature would change.

Additionally, the widgets are very limited in their capabilities. You can only do but so much with the widget that I didnâ€™t really find some of them that useful. For example I would most often just end up going to the twitter widget to maximize the full program and type an update there as opposed to in the widget itself. This was because you couldnâ€™t see that many new tweets and I like to see what others have written before I update my timeline. The same applies for the Facebook widget. You have to scroll left and right to go through recent updates and I usually just ended up going to the full program and not reading any of the content in the widget.

I don’t like the fact that it’s not as easy to get to basic settings while in a program. For instance while I’m in a program on my Pre for example, it’s really easy for me to check the battery percentage, turn on WiFi or Bluetooth or turn on airplane mode.

The voice quality on the phone seemed on par with other sprint phones that I have used. I didn’t make too many phone calls on it but it worked as expected. One thing that is absolutely great on this phone is the visual voicemail.Â  Sprint needs to implement this for ALL their phones now. It’s really convenient to be able to listen to messages without having to dial into a voicemail and pick and choose which messages I want to listen to first. This is definitely a nice feature to have.

[singlepic id=225 w=320 h=240 float=right]The browser on the Hero works well. I like the fact that it wraps the words on the screen no matter the zoom level so itâ€™s very easy to read text. The font is also very crisp and so I didnâ€™t find myself straining to read. But it felt really slow to load pages compared to my Pre for example. This is probably due to the fact that the browser loads flash content. The fact that rotating the screen is also slow brings down performance. But overall I didnâ€™t mind browsing on the Hero.

I donâ€™t like the fact that there are two separate email clients. If you are a Gmail user then you will setup your primary email using the Gmail client on the phone and any other additional Gmail accounts, pop3, IMAP, or exchange accounts are setup in the regular mail client. This just doesnâ€™t seem to make any sense to me. I would like for everything to be consistent and in one place. One annoying thing that I found about the Gmail program was that I couldnâ€™t pinch and zoom. This was frustrating but not a dealbreaker.

The camera takes really good shots even in low light. And coming from a Pre I can also appreciate that it can record video. The video quality was ok. It was at times quite pixilated as compared to video that Iâ€™ve seen on the iPhone 3Gs for example but it worked well for a camera phone.

One annoyance that I had was not being able to take clear photos when I used the trackball. The pictures tended to come out very blurry. I instead found myself tapping on the screen to autofocus and then I got better results. Iâ€™m sure if I had the time to play around with the phone I could figure out what I could do to avoid the blurry shots but my time was limited.

Another drawback is that the camera doesn’t have a flash. While I’m not a big fan of flashes on camera phones it would have been a nice option to have.

One thing that I loved about the Hero was the ability to connect to a lot of different social media networks. I could easily snap a photo and be able to email it, send it as an mms, upload it to picasa or flickr, or facebook. No third party programs were necessary. This was a pleasant and welcomed surprise.

Furthermore all major instant messaging applications were available out of the box, Gchat, AIM, MSN, Yahoo. I didnâ€™t like the fact that Gchat was a separate program much like Gmail was separate from email. I would really like things to be streamlined and not have two different places to look for instant messages.

I absolutely love the virtual keyboard on the Hero (when it doesn’t slow down). I love the autocorrect. I think that HTC did a wonderful job with the whole package, even the haptic feedback (it’s not too annoying for my taste). I love the fact that I can add words to the dictionary and I love the accuracy. I did however experience the keyboard crashing on me after only a few hours with the device. I don’t exactly know what that was about but it didn’t happen to me again.

[singlepic id=223 w=320 h=240 float=left]To have so many applications at my finger tips was extremely overwhelming because once I had them I didn’t even know what to download. There were apps for just about everything, SMS, instant messengers, photos, games, task managers and utilities. I’m sure that given more time I would have loaded my Hero up with all sorts of applications even if just to test them out.

I very much liked how applications would download and you would receive a status of the install in the notification area. This was very cool and a nice touch. It also meant that you could continue to browse and download and didn’t have to wait for one app to finish before you moved on to the next.

If you are like me and love Google products then an Android phone can be a real sweet treat. One thing that I loved was using Google Voice on the Hero. Having the ability to have Google Voice take over my phonebook was awesome. I often found myself going back and forth between my regular number and my Google Voice number on other devices but with the Hero it makes things so simple that it’s easy to be consistent and just use GV.

As I mentioned before Gmail and Gchat get their own dedicated client which some people might love.

Your Google contacts and calendar are easily added to the phone and this is quite convenient if you use Google to store your personal information. Everything is done seamlessly and in the background.

This was the part of the experience on the phone that I didn’t like as much. As a Pre owner nothing really beats it in my eyes as far as multitasking but the Hero does an ok job. It allows programs to remain open and I can easily switch between them by holding down the Home button for a few seconds. However, closing apps is not as simple.Â  The more apps that are open the slower the phone gets. To close apps I had to download a task manager from the app store.

This device is a nice choice for people on Sprint who like virtual keyboards and want to experience Android. I really liked using the phone and loved all of the customizations and apps. I know that it will appeal to a lot of Instinct owners that are looking for more features and power but still want the size and style of Samsung’s popular phone. The price is also set at a very reasonable $179 on a 2 yr contract so it won’t break the bank. If I didn’t have a Pre I would definitely use the Hero as my primary device. Because of some of the issues that I have with it however, it would be a great option as a second line. But I do think that the Hero will make a lot of customers on Sprint very happy.