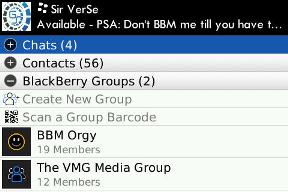 By now the dust should have settled and if you are in the know, and as cool as we hope you are, you should have Blackberry Messenger 5 now. Blackberry Messenger has always been one of the coolest features of the Blackberry, but this latest version is soo much better! Release by RIM last night, there has been a influx of BBM use since then. The day after I think I practically spent my whole morning in BBM. But the question is, if you haven’t got it yet, why should you?

First off, because everyone who is cool with a Blackberry has it. You wouldn’t want to be the only now rocking the regular old school BBM, when everyone else is rocking that new stuff! Second because it will make adding new contact easier! You see with the new BBM, you can simple walk up to someone else with a Blackberry, and then scan a bar code and it will automatically add them to your BBM. It can’t get no easier than that. Third it has avatars, status messages (like Facebook), groups, and support sharing pictures, videos, and audio. 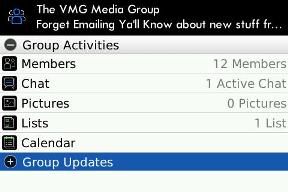 One of the best features of the new BBM is the Groups. This is just insane, each person can create a group and invite others to join. It kind of reminds me somewhat of a Facebook Page or Group, and right inside BBM. From within the group, there is a group calendar, lists, chat, and picture sharing. This is definitely a cool feature! It isn’t all roses though. Like having way too much Candy, it starts off good, but then makes you sick. So don’t go group crazy and start adding too many groups. For one if you don’t change your options, your BB will end up going off all the time if you happen to be in a very active group. Also if you are in a very active group and a full blown chat fest is going on, it will give your BB a run for it’s money. I’ve experienced rapid battery drain, lock ups, and general slight freezes. So use with caution lol.