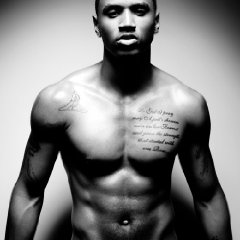 When I think of my top 10 all time favorite R&B males, Trey Songz was never on that list. I’ve never purchased any of his albums or loaded any of his songs on my ipod. He always struck me as an R. Kelly clone that had decent singles but it I just wasn’t interested. When I heard his single I Need a Girl, I was pretty sure I wouldn’t be getting this album either. But, after listening to Successful feat Drake I had a change of heart. I love everything about this song lyrically, production wise and just what the song as a whole represents. Even though the Drake version of this song is by far one of my fave songs for 2009 I wasn’t disappointed in Trey’s version. When I saw the video I was convinced to cop this album and see what Trey Songz hype is all about.

One of the songs that first struck me is I Invented Sex feat Drake. It is a really smooth mid tempo song coupled with a catchy hook and addictive lyrics. While reading over the track list I more than expected this to be a very explicit song, but to my surprise it’s a very tasteful song and definitely one of my favorites.

Say Ahh Feat Fabolous is definitely a club banger. This song definitely makes you want to dance. The whole swagger on this song is ill, but it is definitely more so for the grown and sexy. But on LOL :-) feat Gucci Mane and Souja Boy, he definitely appeals to the younger crowd as well. It is a very fun song that you can appreciate if you’re a Twitter or text fan.

Jupiter Love is a slower track very sensual and smooth and it definitely works. There are a couple other slower songs that really made me feel some kind of way Love Lost and Holla If You Need Me.

To be perfectly honest, this album really impressed me and Trey Songz is now one of my favorite artists. I could listen to this album from beginning to end then back again without skipping a song. It was a struggle to pick out my favorite songs. Whether you’re a hip hop, r&b or soul music fan I would suggest copping this album it has something for everyone on it. I give this album a 4 out of 5 stars.