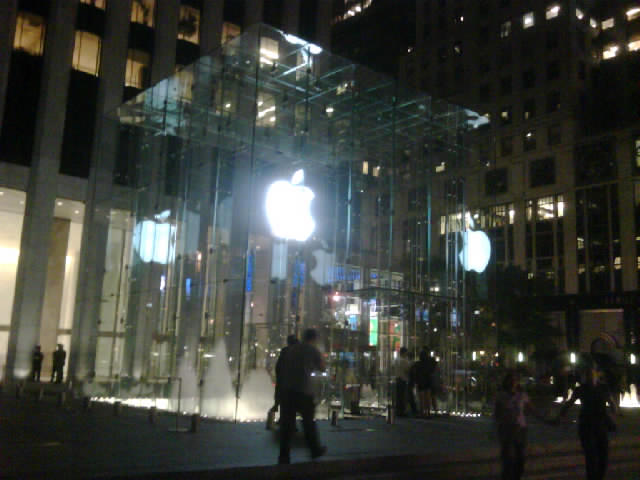 So after weeks of debating it, asking close friends, the global Twitter community, and reading every guide and manual on apple.com, I have taken the leap and purchased a 13″ Macbook Pro!

I debated whether I would do refurbished (which was cheap, but had to be shipped), or new (which wasn’t as cheap with taxes, but came with instant gratification). I debated whether to get it from Best Buy or do the full experience and hit up a Apple store. When it came down to it, I decided if I was going to make such a life altering choice, I might as well get the full Apple experience.

So around 11pm on on August 12th, I headed to the Apple store on 5th Avenue (the flagship) in New York City, where I met with G Style’s Co-Owner & Editor In Chief Chuck Holliday as he recorded this moment in time (video coming soon…maybe lol). So we decended into the underground lair of the Apple store which was spacious, open, and overwhelming lol. I knew what I was getting, but walked around taking it all in.

I was then approached but a One on One Specialist who assisted me. He logged on to something, put some info in, and directed me to the register. This is where I spotted Dougie Fresh carrying on some business of his own. I picked up the MBP, may a last attempt to change my mind to which the register clerk said I couldn’t do lol and I was off with my first major Apple purchase.

First Impressions
The MBP is definitely a sexy looking device! No question about this, the unibody look is hot and the glossy screen looks great. Granted I’ve been hearing that the glossy screen isn’t a good look if in use outside, but I’ll cross that bridge when I get to it. It had been a week of hell for me personally so I didn’t get to go in on it like I really wanted to, but one of the first test I did on it was the battery. First day with it I turned it on at 10am and lightly used it all day. Some surfing, some twitter via Seemic Desktop, and putting it to sleep here and there. I was impressed that at 11pm that night it said I had still 2 hours of power left!! This is something I would never have gotten with my old laptop!

Much of the other tests was just some daily use light tests. Using twitter on via a desktop client (Seemic Desktop), surfing the web, and getting use to the slightly different command keys I needed to use to get stuff done. I love how if I open a link on Twitter via Seemic Desktop, how quick Safari launches and displays it, it was a thing of beauty. On my old laptop I used FireFox, which would take it times launching. I will be putting that on my MBP to see if that was just a browser thing or a system one.

I haven’t done any video editing or heavy tasks yet since I was so busy that week, but in part 3 I’ll go deeper. Overall there is a learning curve for me, but I’m happy to say it is a small one. So far I’m happy with this purchase. I was even able to connect it to my vista laptop via LAN cable and transfer some files over without much trouble! But I will need some help from you Mac users out there lol, I need software, where is the best place to “get” some lol.

So does this mean I have given up on Windows? Not at all, I’m still very interested in Windows 7 and since I have dual boot my MBP to Windows, I will be doing so once I figure out how. Stay tuned for part 3!