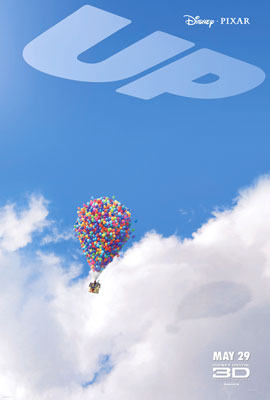 Going into its second week in the theaters is Pixarâ€™s â€œUPâ€. The movie is about Carl Fredricksen (voiced by Edward Asner) a retired old man who just sits in his house and reminisces about his life with his wife who has passed away. Into his life comes Russell (voiced by Jordan Nagai) an 8 year old Junior Wilderness Explorer who needs to help an elderly person to get his last JWE patch. At the same time a corporate developer is trying to get Carl to sell his house and he is not budging. Carl decides to fulfill his and his wifeâ€™s dream of moving theyâ€™re house to South America, and inflates countless numbers of balloons to lift his house and carry on his promise he made with his wife. He soon finds out he has a stowaway as Russell pops up on his porch. With no way to send the kid back, and a little bit of bad circumstances, the two embark on their South American adventure. 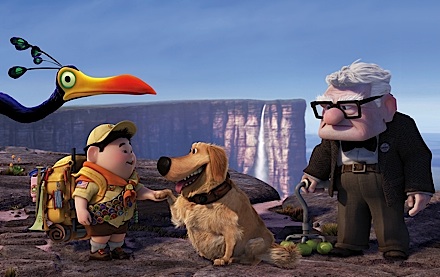 Now just like with all cartoons I review, I took my two little girls with me to see this movie, so theyâ€™re opinions are considered when reviewing this movie. They Loved It! Hey I Loved It! This was Pixarâ€™s 10th straight hit and I congratulate the studio on making another stunning movie the whole family can love. Plus with a weekend opening of a little over $68 million, things are still looking “Up” so to speak. The visuals in this film were fantastic and the characters and scenery came to life. The dogs in the movie were hysterical, especially Dug (voiced by Bob Peterson) who stood out as one of the funnier characters. The antagonist Charles Muntz (voiced by Christopher Plummer), was dastardly in his search for his own dream and with an army of dogs at his command, very ruthless in his pursuit of accomplishing it. There were a lot of laughs in this movie along with a great story of togetherness, friendship, and finding out that sometimes the best journey you can have is with the time spent with a loved one. My daughters give this movie 4 balloons out of 4 and I agree with them. A quote from my youngest, â€œI liked the dog that talked like Alvin & the Chipmunksâ€. The movie ran 1hr and 29mins. It was rated PG for some peril and action. It was written & directed by Pete Doctor and co- directed by Bob Peterson. It was produced by Pixar Animation Studios. It was distributed by Buena Vista Pictures Distribution.

Reviewed by Eric Williams aka Ezo
The next time you think of traveling, how about visiting a family member. Ezo
Next Review: TBD